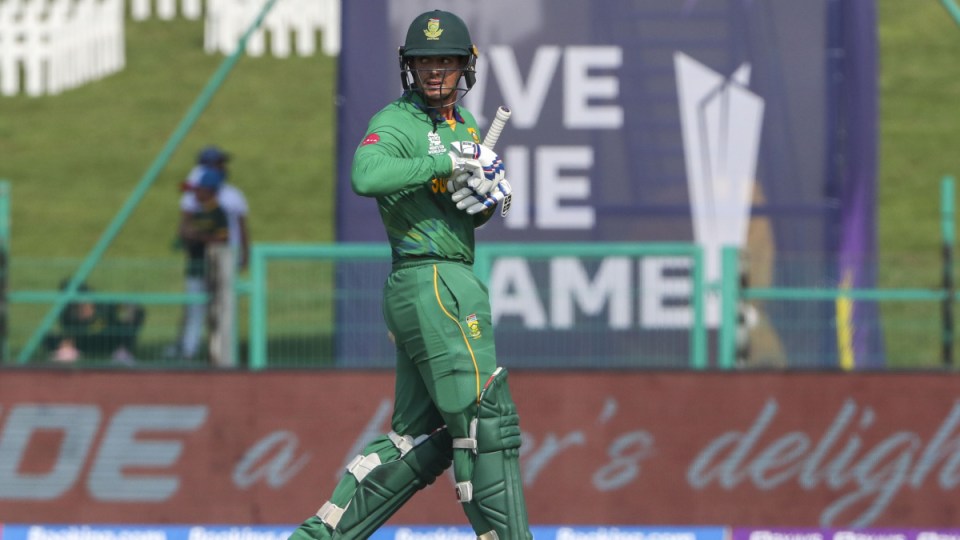 Quinton De Kock has apologised for pulling out of a T20 World Cup match when ordered to take a knee. Photo: AP

South African cricket star Quinton de Kock will take a knee after all.

De Kock on Thursday apologised to teammates and supporters for refusing to play in a T20 World Cup game and said he felt his rights were “taken away” when players were told they must take a knee in support of the Black Lives Matter movement.

But de Kock said he will take a knee ahead of future games.

The wicketkeeper-batsman made himself unavailable for Tuesday’s game against West Indies after a directive from the country’s cricket board ordered all its players take a knee before World Cup games.

In a statement, de Kock said he did not mean to offend anyone but “I felt like my rights were taken away when I was told what we had to do in the way that we were told.”

Cricket South Africa issued the new order just a few hours before the game in Dubai having previously said they could choose their own way to show their support for the anti-racism movement.

“I did not, in any way, mean to disrespect anyone by not playing against West Indies, especially the West Indian team themselves,” de Kock said.

“Maybe some people don’t understand that we were just hit with this on Tuesday morning, on the way to a game.

“I am deeply sorry for all the hurt, confusion and anger that I have caused. If me taking a knee helps to educate others, and makes the lives of others better, I am more than happy to do so,” he said.

De Kock’s refusal to play over the Black Lives Matter gesture sparked fierce reaction in South Africa, where issues of race and racism are constantly in the headlines because of the country’s history of forced segregation under the apartheid regime, which ended in 1994.

Those players’ actions in not kneeling provoked accusations that they did not support the anti-racism movement.

De Kock denied that in his statement, explaining he came from a mixed-race family himself. He said his half-sisters are Coloured, a term in South Africa for people with a mixed-race heritage, and his stepmother is Black.

“For me, Black lives have mattered since I was born. Not just because there was an international movement,” de Kock said. “I didn’t understand why I had to prove it with a gesture, when I live and learn and love people from all walks of life every day. When you are told what to do, with no discussion, I felt like it takes away the meaning.

“If I was racist, I could easily have taken the knee and lied, which is wrong and doesn’t build a better society.

“I’ve been called a lot of things as a cricketer … Stupid. Selfish. Immature. But those didn’t hurt. Being called a racist because of a misunderstanding hurts me deeply. It hurts my family. It hurts my pregnant wife.”

De Kock said he and teammates had “emotional” conversations with members of the Cricket South Africa board on Wednesday and “I think we all have a better understanding of their intentions as well.”

He said he was keen to continue playing for South Africa if captain Temba Bavuma and the team “will have me.”

“The CSA Board regrets that the timing of its directive earlier this week may have been unsettling for the players in the lead-up to the match against the West Indies.”