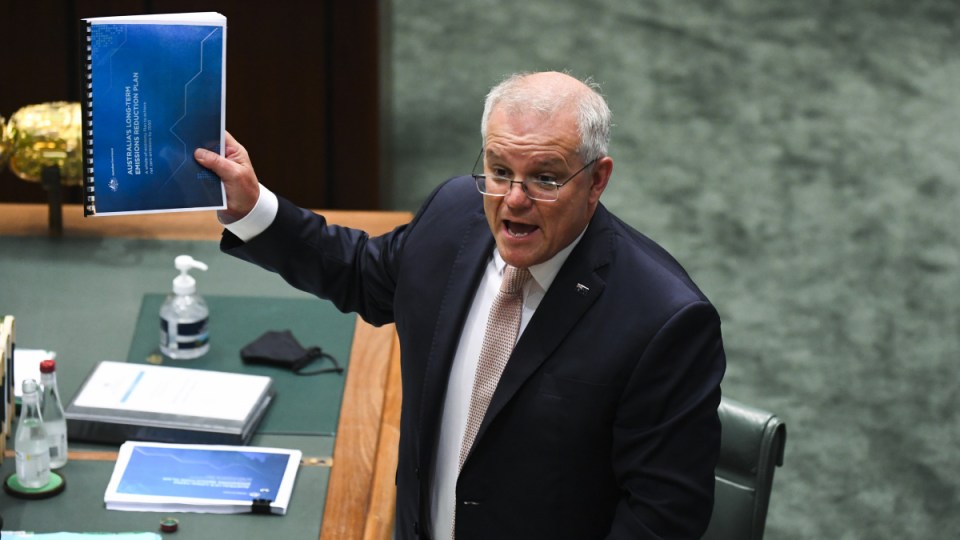 Boris Johnson enthused about the Morrison government’s belated embrace of the 2050 net-zero target.

“They’ve done a heroic thing, the Australians, in getting to that commitment,” Johnson said.

“[It] was actually very difficult for Australia to do … because Australia is very heavily dependent on coal and on lots of carbon-producing industries.”

“Heroic” could, however, be applied to the plan he and Energy Minister Angus Taylor released on Tuesday in a less gushing sense.

That plan relies on many “heroic” assumptions which may or may not turn out to be reasonable.

Of course given the three-decade time frame, any roadmap must be open to question, because it is impossible to accurately predict that far ahead.

But the fine detail of the plan’s assumptions is important, and the government has yet to release the modelling.

The plan, which doesn’t contain new policy, is constructed on a narrative which can be more easily and immediately judged, and that narrative is false.

Morrison’s claim the plan is based on “technology, not taxes” is sophistry, designed for political warfare rather than policy truth-telling.

The “technology” side is correct enough, but “taxes” are very much there.

The government boasts of the multi-billions it is investing to drive the technology. This involves taxpayer funds.

Indeed in its reaction to the plan, the Carbon Market Institute lamented that “the taxpayer rather than business will remain the main driver with $20 billion earmarked to underwrite the transition”.

Morrison also likes to give the impression this massive transformation to a cleaner economy can be a relatively painless exercise. But this too is misleading.

We obviously must make the change to a low emissions future, for environmental and economic reasons, and there will be many opportunities, in the form of new industries and jobs, produced by it.

But there will be costs – for industries, businesses and individuals.

There’s a useful comparison with Australia’s slashing of tariffs in the 1980s and early 1990s.

As is happening with net zero, the world was the whip hand, forcing Australia to open and reform.

The resulting structural changes brought lasting benefits for the economy and for households.

But in the process, certain industries faded, businesses failed and workers lost jobs.

Some people retrained; others never got back on their feet.

Inevitably, big economic restructurings have winners and losers, the old story of pain as well as gain.

Morrison doesn’t focus publicly on the losers, but the Nationals do.

Climate change denialism drives the attitudes of some Nationals, but they are also deeply worried about the reaction of their base in mining areas in particular.

After noisily pursuing a package of safeguards and trade offs, what the Nationals have obtained remains unclear.

There will be a Productivity Commission review of the plan’s progress every five years.

And the minor Coalition party has obtained an extra seat in cabinet.

Beyond that, Nationals sources selling the agreement point to two things.

The first is that the plan is not to be legislated, and does not envisage government action to shut down coal or any other resource industry. The fate of those industries is left to the market.

Secondly, they say a number of specific measures are in the pipeline for later announcement.

Delaying these announcements does seem an odd tactic after the Nationals made so much of needing visible safeguards.

It’s not really explained by the line that there are cabinet processes to be gone through.

The messy spectacle of nailing down Nationals’ agreement to the plan has delivered a hit to Barnaby Joyce, who becomes acting PM after Morrison leaves for the G20 and Glasgow late Thursday.

Joyce’s angst is obvious, as he’s painfully caught between his past vocal rejection of net zero and his current forced public acceptance of it.

He struggled, with the Prime Minister and with his colleagues, during the Coalition negotiations. He struggles in question time. And he will struggle as he campaigns to hold Nationals seats in Queensland.

Boris Johnson’s effusiveness about Australia suggests he is easing the way for Morrison at Glasgow next week.

Australia’s 2030 position – taking an updated “projection” rather than an updated “target” – may attract some negativity, because 2030 has become the main focus of COP26.

On the other hand, Australia is a bit player.

Now that the government’s plan, inadequate as it might be, is out, attention will turn to Labor.

Anthony Albanese has understandably waited until after Glasgow to release the opposition’s policy.

He can’t credibly avoid the moment much longer.

In general, Labor doesn’t have much policy in the public arena.

If it is as serious about the climate issue as it claims, it needs to get an alternative out before Christmas.

Beyond that, for Albanese the challenge is to position the opposition’s policy so it is distinct from the Coalition’s – which means being more ambitious – but not so radical that it makes Labor a dangerously big target.

Finding that sweet spot will be tricky for Albanese, especially if there are some internal differences about precisely where it is.

View from The Hill: Morrison’s net-zero plan is built more on politics than detailed policy