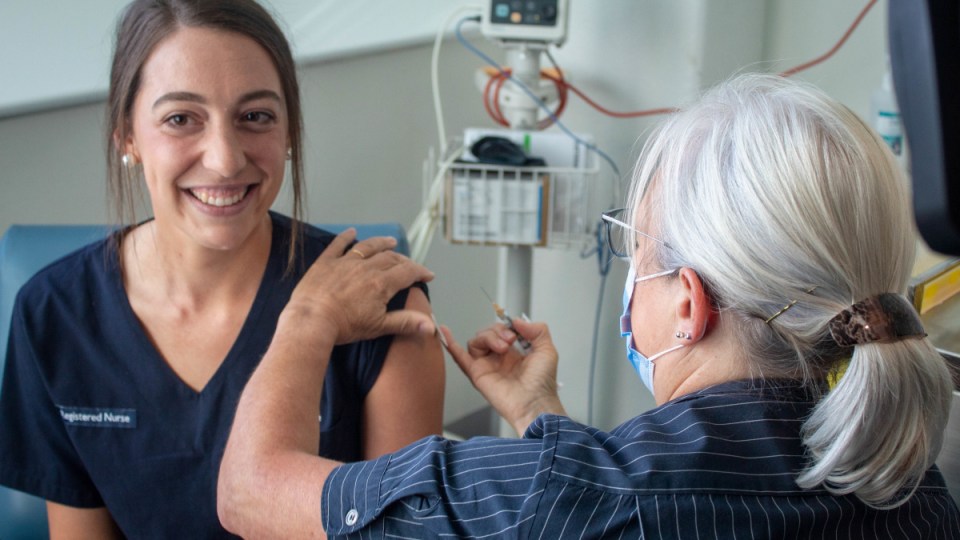 About 97 per cent of Tasmanian public health workers have had the COVID jab, or have an exemption. Photo: AAP

About 97 per cent of Tasmania’s public health sector workers are either vaccinated against coronavirus or have been given an exemption ahead of a looming deadline.

The state government requires staff in the health system to have had at least one dose by Sunday, or to have made a vaccination booking or have evidence of an exemption.

Workers who don’t comply will be sacked.

“This equates to a headcount of 14,534 paid employees.

“In recent days, we have seen a significant spike in public health sector employees providing evidence of vaccination or a medical exemption.

“We’ll continue to work with the remaining three per cent to achieve the best possible outcome.”

Mr Rockliff had earlier in the day indicated about 10 per cent of the health workforce had not yet submitted proof of vaccination.

The mandate, announced in early September, applies to 16,000 health workers.

The state government has not indicated how many staff have been given exemptions.

The island state will open its borders to fully vaccinated travellers from anywhere in the country on December 15.

Travellers will have to return a negative test within 72 hours before arriving.

Tasmania is currently closed to NSW, Victoria and the ACT. The state has recorded just three coronavirus cases this year.

The Health and Community Services Union and Australian Nursing and Midwifery Foundation have raised concerns about how the state’s hospitals will cope if cases emerge.

“What would be devastating to our health system would be if we didn’t have a vaccinated workforce to keep our beds open,” Mr Rockliff told state parliament.

“If we had to furlough hundreds of workers, like we’ve seen interstate … that is what we cannot afford to see happen here.”

Premier Peter Gutwein wants 90 per cent of the state’s over 16 population to be fully vaccinated by December 1.