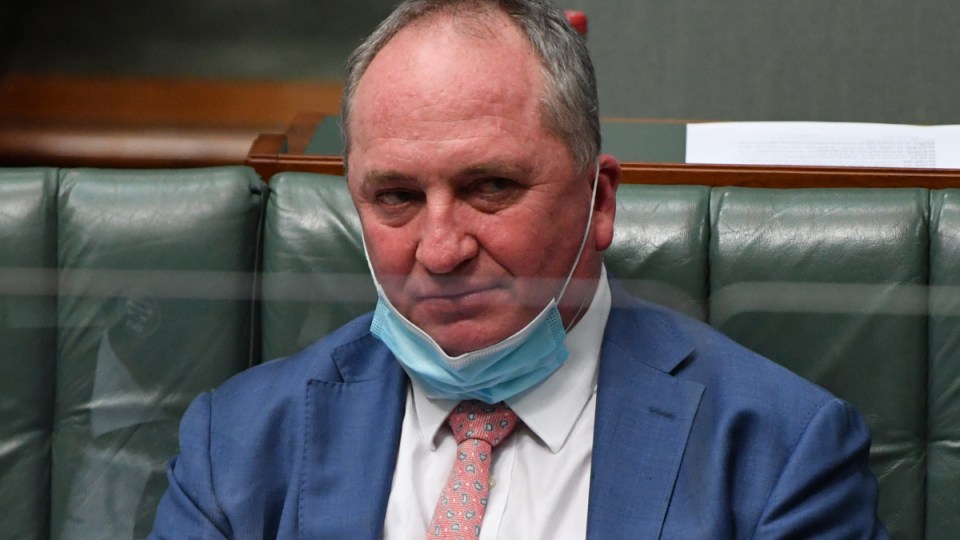 Deputy Prime Minister Barnaby Joyce has delivered for Scott Morrison but is left with a bittersweet aftertaste. Photo: AAP

Barnaby Joyce is finding the taste of his success in landing the net-zero deal rather more bitter than sweet.

The deputy prime minister has delivered for Scott Morrison. The Nationals have signed up to the 2050 climate target. But in the process Joyce has had to turn himself inside out, which will confuse and disillusion many of his supporters, and is probably doing his own head in.

Joyce clinched the agreement with Morrison, and then took it to the Nationals party room, the forum he always said would make the decision on it. In Sunday’s party discussion he saw the numbers go the deal’s way, as he expected. When he spoke at the end of the debate, with the result clear, he said he read the sense of the room as support, adding “I would have been a no”.

So did this amount to his being “rolled”, as some suggested? It depends how you look at it.

While by his own words he declared himself on the losing side, if the agreement with Morrison had been scuttled, that would have been seen as a major defeat for Joyce. Joyce achieved what he knew he had to, however reluctantly.

On Monday, Joyce told the ABC, “The party room has made the decision. I abide by the party room. I am one hundred per cent on board with the goal of reaching net zero by 2050.”

Some cynics argue the result allows him to give the PM what he needed and then to say in the Nationals’ Queensland seats – where he is worried about votes flaking off to the right – that it was a matter of the numbers in the party room rather than his personal view.

This might be seen as an idiosyncratic brew of pragmatism and purity, but it looks more like a muddled message.

The Nationals are getting a lot of blowback from their base in Queensland, and some Nationals sources fear the pitch that the party has achieved “safeguards” will be lost on hard core sceptical voters there.

We have to wait for the policy announcement on Tuesday – cabinet ticked off on it late Monday – to judge how much the Nationals extracted for all their agonising and haggling.

In theory Morrison could have given them no concessions, because he said he intended to go to Glasgow with the net-zero target regardless. In practice, politics dictated he was required to buy peace with the junior Coalition partner.

On Monday Morrison formally put out one element of the multifaceted agreement – the restoration of Resources Minister Keith Pitt to cabinet.

The twists of the Pitt story are as extraordinary as those in the Joyce one.

When he became leader Joyce demoted Pitt to the outer ministry, only for him now to be promoted back again as part of the agreement.

But in the party room’s consideration of the deal, Pitt was on the “no” side.

Former leader Michael McCormack – deposed by Joyce – said Pitt’s return to cabinet rectified what had been a “foolhardy” decision.

“To think the leadership thought it reasonable to take resources out of cabinet was completely insane,” McCormack said after the PM’s announcement. He said he couldn’t believe former resources minister, and Joyce loyalist, Queensland senator Matt Canavan had been silent on this.

Canavan, who has a high profile on Sky, intends to continue to publicly fight against net zero, now that Joyce is (presumably) constrained by cabinet solidarity.

On Monday Canavan was looking well ahead. “We can’t bind future party rooms or parliaments. The National Party supported an emissions trading scheme at the 2007 election and a few years later they came out against a carbon price and a carbon tax,” he told The Australian.

The ructions in a divided party are far from over.

View from The Hill: Will Barnaby Joyce be less ‘on board’ with net zero when he’s in the backblocks?