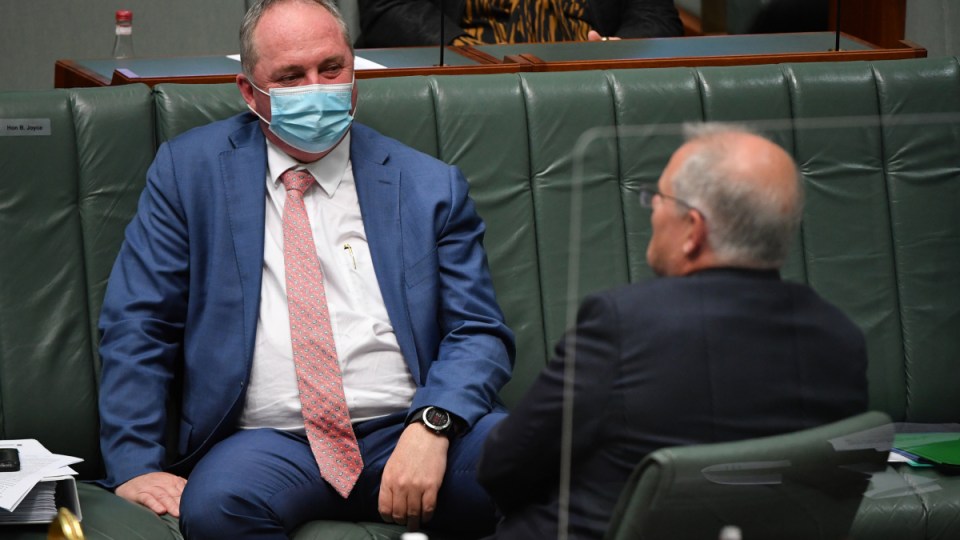 The Morrison government’s net-zero emissions plan should finally be locked in by Tuesday.

The details remain shrouded in mystery but Prime Minister Scott Morrison has used an opinion piece in News Corp newspapers to confirm “technology, not taxes” would be the aim as he takes the 2050 net-zero emissions target to the Glasgow COP26 summit.

“We will not be breaking the pledge we made at the last election by changing our 2030 emission reductions ­targets. I said we would meet and beat this target and we will,” Mr Morrison writes.

He also declares: “We won’t be lectured by others who do not understand Australia”.

“Decisions overseas are bringing about major changes in the global economy that will impact on Australia’s future prospects, both positively and negatively,” Mr Morrison’s piece reads.

“I am determined to shield our nation from the negative impact of these changes while positioning us to take advantage of the many opportunities presented.

“We will be making a commitment to achieve net zero by 2050, and have a clear plan for achieving it…we will do this through technology, not taxes…by respecting people’s choices and not enforcing mandates on what people can do and buy.”

The PM also revealed federal cabinet had signed off on “safeguard” reviews of the economic impact of the target on rural and regional communities.

“It will be a safeguard for rural and regional Australia,” he told The Australian, adding the government would provide “accountability” for the emissions plan.

“This will be a real-time ‘actual lived experiences’ assessment by the Productivity Commission.

The Australian reports that Mr Morrison and the Nationals had agreed on a permanent review process – with the first assessment to be delivered in 2023.

Writing in the Herald Sun, the PM declared he would oppose any mandate “to force closure” of industries and vowed to dodge international pressure to upgrade Australia’s 2030 target of a 26-28 per cent cut to emissions based on 2005 levels.

It follows a strange Monday of Senate estimates hearings where federal ministers and department officials couldn’t say what the strategy included and what changes the Nationals had negotiated.

Energy Minister Angus Taylor also invoked a cabinet provision that would keep secret the economic modelling that underpins the net-zero plan, despite a Senate order to produce the document.

Mr Morrison promised the net-zero plan would be announced “soon enough”, but mere days from the Glasgow summit, Australians are still no wiser as to what the country’s climate future looks like.

“They’re making it up as they go and they’re refusing to tell the truth,” railed Labor’s shadow climate minister, Chris Bowen.

Despite the National party on Sunday trumpeting having reached an agreement with the Liberals on the plan, no details of the strategy were released.

“The first rule of Fight Club is not to talk about Fight Club,” Nationals minister Bridget McKenzie joked, as she dodged questions on what concessions the junior Coalition partner had extracted from PM Morrison for their support.

It came after Nationals leader Barnaby Joyce on Sunday said “I don’t have to” share what the Nationals asked for, or received, for their support.

“What you’re asking for is for this committee to be able to effectively interrogate the internal deliberations of cabinet and that has not been the approach in the past,” he said.

In other estimates hearings, government ministers and department officials declined to speak about the costs of the net-zero plan, or what policies it would include.

Officials later advised that 10 personal staff for the Prime Minister – including advancers, advisers and a photographer – would attend, as well as a further 17 staff from the Department of Prime Minister and Cabinet, and more from the Foreign Affairs department.

Senator Seselja also revealed the government had made a “public interest immunity claim” on the economic modelling that underpinned the net-zero plan, with Mr Taylor saying it couldn’t be released due to it being a cabinet document.

That was despite the Senate ordering that the modelling be released last week, after Nationals senator Matt Canavan had criticised it being kept secret, and Senator Seselja promising a “more detailed response” this week.

One Liberal member described the immunity claim on the modelling as “bulls–t” to The New Daily.

At a press conference, Mr Bowen blasted the secrecy.

“This mob who campaigned day after day at the last election, about the cost of climate action, now saying the Australian people do not have a right to see their modelling. It is an outrage,” he said.

Mr Bowen also took aim at the lack of information from government on the plan, claiming “we don’t know what’s being traded”.

Just one part of the Nationals’ negotiations was revealed on Monday, with Resources Minister Keith Pitt being returned to the cabinet committee.

That boosted the Nationals’ representation from four to five members on the 23-person cabinet, and ensured Mr Pitt got a chance to contribute when cabinet debated the net-zero plan on Monday.

Deputy Nationals leader David Littleproud said Mr Pitt’s reinstatement to cabinet was “part of what we asked the Prime Minister to make sure that the resource sector was represented”.

Mr Morrison said in a statement that Mr Pitt would work with Mr Taylor “to ensure we reach our emissions-reduction targets through technology that will empower our industries and regional communities”.

The Nationals have painted their acceptance of the net-zero target as about acting as a bulwark against over-reach on emissions reduction, and representing regional communities in negotiations.

Mr Littleproud said he expected more details of the net-zero plan would be released “in the coming day or days”.

Despite criticism of not locking in a more ambitious 2030 target, and instead only focusing on a 2050 target, Mr Morrison told Parliament that he was proud of Australia’s emissions-reduction record.

“What Australia can point to is a track record of delivering a 20 per cent reduction in emissions at the same time as Australia has achieved a 40 per cent increase in the size of our economy,” he said.

‘Addicted to secrecy’: Net-zero plan still a mystery, days out from Glasgow