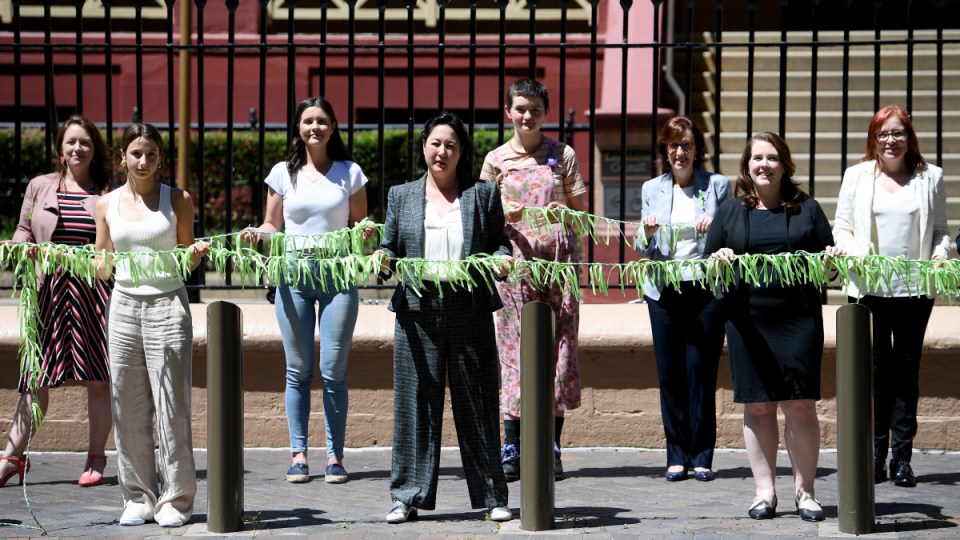 A petition to the NSW parliament calls for an overhaul of sexual consent education in schools. Photo: AAP

One was 12 years old the first time they were sexually assaulted.

Another was groped by a friend while they slept.

“I would never have consented to public sex had I been sober,” a third said.

“Afterwards I went to the bathroom and cried.”

These harrowing stories were read out in the NSW Parliament on Thursday, as it accepted a petition to overhaul sexual consent education in schools.

Bearing more than 20,900 signatures, the petition was sparked after 6000 people came forward with stories of their sexual assaults as students.

Standing with NSW Women MPs and 6000 ribbons representing the testimonies of women who disclosed sexual assault to Chanel Contos – ahead of petition debate calling for holistic consent education happening at 4pm today in the NSW Parliament #nswpol pic.twitter.com/sfAKoiDpu4

Advocates unrolled a rope tied with green ribbons, one for each disclosure, outside the Parliament on Thursday.

Greens MP Jenny Leong introduced the petition to Parliament a day after a historic bill was tabled for an affirmative model of consent.

The stories made for uncomfortable listening but demonstrated the need for further reform, she said.

“If I were to walk out on the street right now and ask the first woman that I saw if she had ever been harassed, assaulted, pressured, slut-shamed … the answer would no doubt be yes,” the Newtown MP said.

“It’s happened to me, it’s happened to others in this chamber, and if we don’t change how we educate our young people, it will happen to our daughters and our granddaughters too.

“We know that teachers are doing as much they can with what they have … but I don’t think any member in this place can say we are doing enough.”

The petition has support from across the political spectrum with members of the Greens, Liberals and Labor backing it in parliament.

“We need to address the issues of why and how women still feel unsafe and are unsafe,” Liberal MP Felicity Wilson said.

The North Shore MP, who co-sponsored the petition, shared the story of a constituent whose sex education was so poor she didn’t even realise she had been assaulted at the time.

“Being visibly too drunk to consent or being penetrated without my knowledge were things that I shrugged off at the time,” she quoted from the constituent.

“I made contact with her as (her experience) was so similar to my own experience of sexual assault 28 years ago … both of us had mistakenly thought that (the men) were our friends.”

“It’s incredibly disappointing to me that a generation after I was raped, the same problems remain and the same excuses are used.”

Speaking on behalf of the education minister, Geoff Lee pointed to the government’s consent law overhaul and a public pledge from NSW education leaders to improve consent education as progress.

“The NSW government has heard the voices of victim-survivors loud and clear,” said Mr Lee, who is the state’s tertiary education minister.

He said professional learning programs and resources had been developed to help teachers.

But Labor MP Marjorie O’Neill, who co-sponsored the petition, expressed “deep concern” with the current measures proposed by the government, saying they put the burden of consent education onto “already overworked and underpaid teachers”.

“It should be delivered by specialist experts.”

Success must be evaluated on a depth of understanding and reduction in sexual assault and harassment, Ms O’Neill said.

“The measure of success cannot simply be how many students attended a session or downloaded materials.”

Michelle Grattan: Morrison’s defeat is a victory for Independents, and the Greens
Government refuses to release net-zero modelling in ‘new low’ for accountability
Today's Stories