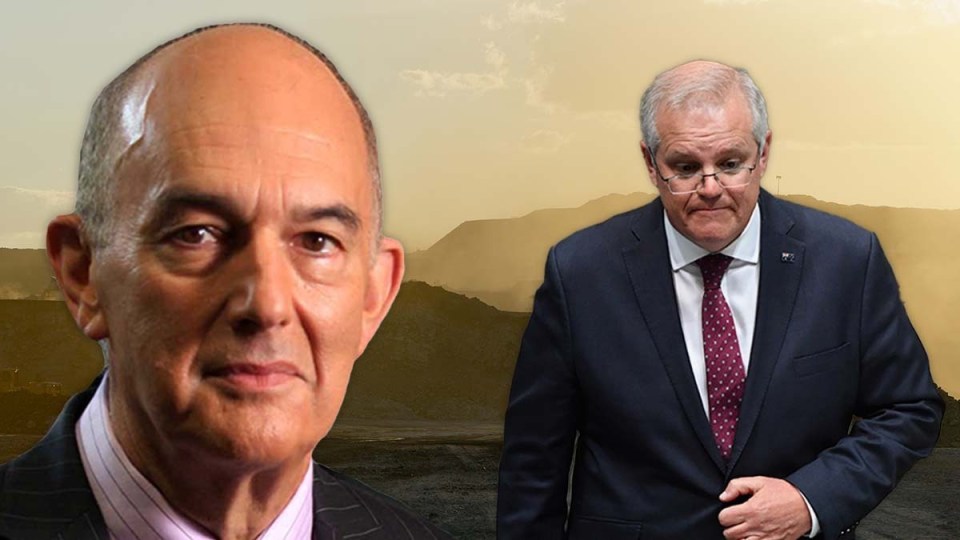 Any credibility on climate change that Scott Morrison may have had is in danger of being shredded, Paul Bongiorno writes. Photo: TND/AAP

The government of Australia is playing out a pantomime whose happy ending can only result in a shredding of its credibility on climate change.

No one in the national capital believes “the second party of government” – as the Nationals’ Senate leader Bridget McKenzie calls it – will deny the Prime Minister Scott Morrison the ability to go to the Glasgow climate change summit in two weeks’ time without a 2050 net-zero target.

But that’s not the message the party’s born-again leader Barnaby Joyce gave in his blitz of morning media appearances on Monday.

A four-hour meeting of the 21 Nats on Sunday ended without a conclusion, despite assurances from Energy Minister Angus Taylor their coal backers and fossil fuels mates would be receiving billions worth of sweeteners.

Mr Joyce insists his party is “not chained to a script,” he derides modelling put up by anybody – the Business Council, CSIRO, the government, you name them – as make believe.

Further undermining whatever decision the government arrives at is the sniping from former resources minister Matt Canavan, who on his arrival back in Canberra told the media scrum “the Prime Minister doesn’t have a plan, he has a dream”.

On Monday we got something of a look at the dream/plan when reports leaked out of the Liberals’ party room briefing.

Unlike the Nationals, acting more like opponents than government members, there was a positive reception to the presentation from the PM and his minister for “emissions reduction” Angus Taylor.

But there was already a capitulation to the Nationals sceptics holding them all to ransom – Mr Morrison has given up on taking more ambitious 2030 targets to Glasgow.

He confirmed this in Parliament: There would be no change to the 2030 targets of 26 to 28 per cent agreed to by Tony Abbott before the 2015 Paris summit. Instead, there would be a projection to better it.

That projection is understood to be in the vicinity of 30 to 35 per cent, still a long way below the 45 per cent the government’s experts advised was needed seven years ago to put us on a net-zero path.

The government’s new clarion call is the repeated claims that Australia has bettered countries like New Zealand and Canada cutting emissions by 20 per cent on a 2005 baseline.

No mention is made of the contribution of drought and COVID-19 shutdowns or of the more active commitments from the states and territories.

Indeed, it is a wonder the Prime Minister doesn’t base his target on a 40 per cent projection for 2030, which is the average of those adopted by the states and territories.

Mr Morrison would have us believe that his strident rejection of Labor’s 43 per cent emissions reduction target by 2030 at the last election was still justified because technology will miraculously close the gap to net zero in the next 30 years without anyone needing to lose their jobs in the meantime.

He claims “technology and not taxes” will do it, but that simply doesn’t stand up to scrutiny.

By one reckoning leaked to The Australian, Mr Morrison will have to stump up $20 billion to win over the Nationals and to subsidise the amazing technologies that will save gas and coal from extinction.

And somehow, at the same time, despite adding to the cost of producing energy through carbon capture and storage it will result in cheaper electricity than from renewables.

Who will pay for this technology if it’s not taxpayers?

It must lead to these vested interests being given higher priority than other government outlays like health, aged care, disability or the social security safety net.

Behind closed doors according to some Liberals, Mr Taylor was realistic enough to talk of job losses while at the same time talking of job replacements in new industries.

Mr Taylor talks of “clean steel” and “clean hydrogen”, carefully not using the word “green”, which is zero emissions. It’s reminiscent of the coal lobby back in 2013 coming up with “clean coal”.

It is a disingenuous use of language scarcely masking the billions of dollars Mr Taylor wants to direct to new coal and gas projects rather than phasing them out as the International Energy Agency says must happen to stop the planet frying.

Deputy Nationals leader David Littleproud is more up front, assuring us that the party will eventually arrive at the required 2050 destination but pleads more time for “the adults” to get their heads around the many complex issues.

Just who the children are in this imbroglio is a matter of opinion, but you know somebody is not being grown up when Peter Dutton – in his Leader of the House role – shut down Anthony Albanese’s attempt to have the Parliament agree to a motion for a legislated net-zero target by 2050.

Mr Dutton moved that the Labor leader “be no longer heard” just like the calls for real climate change action have been ignored for years.

Mr Albanese says without any significant increase in a target for 2030 and without it being legislated, “it’s just a charade that we’re seeing”.

And with all the credibility of play acting.