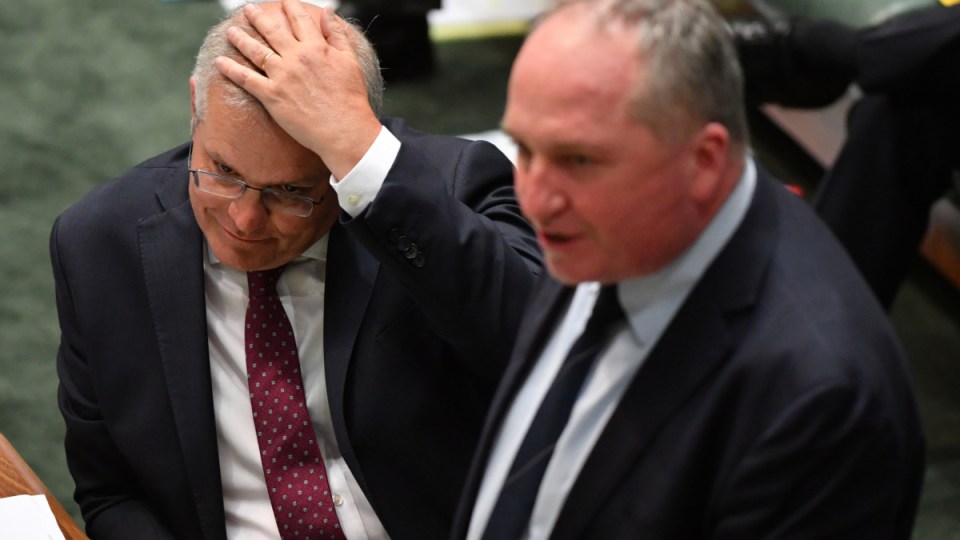 The federal cabinet, not the Nationals party room, will decide whether Australia adopts a net-zero emissions target, Scott Morrison says, in a rebuke to Barnaby Joyce as negotiations drag on with just days until the Glasgow climate summit.

It potentially sets the stage for an ugly scene if Nationals’ cabinet ministers don’t back the plan, with party leader Barnaby Joyce admitting they’d have to quit the frontbench if they didn’t agree – which he warned would create a further “ripple effect” in the Coalition.

“The process is quite clear. Everybody is in cabinet at the behest of the Prime Minister. That includes me,” Mr Joyce said on Monday.

“Hand in glove with that is the ripple effect through the Coalition. You know, everything comes with rights and comes with consequences, and everybody is aware of that.”

This sitting fortnight of Parliament is set to be dominated by net-zero discussion, with Mr Morrison sweating on brokering a deal by the time of the Glasgow COP26 climate summit on October 31 – less than two weeks away.

It’s unlikely a final agreement will be reached until mid next week, mere days before he will jet to Scotland.

Mr Morrison told his Liberal colleagues he believed not reaching a net-zero commitment would be a national security risk, and a danger to Australia’s global alliances.

Net zero by 2050 is a basic target adopted by virtually all Australia’s key allies and trading partners, including the United States, United Kingdom, Japan and South Korea.

Nationals MPs have stressed for weeks that any net-zero target would be a plan of the Liberal Party, which they have given no guarantee of supporting.

After months of political shadow-boxing and delay over the plan, Energy Minister Angus Taylor’s belated presentation to a special Nationals meeting on Sunday afternoon saw no result from the junior Coalition partner, with MPs needing more time to consider questions.

“We’re not chained to a script. We have our own party and our own party room for a distinct purpose,” Mr Joyce told ABC News on Monday.

“You’re not going to do that in four hours on a Sunday night.”

The Coalition has been in government since 2013.

Mr Morrison has flagged action on a formal net-zero target since February.

But deputy Nationals leader David Littleproud said it was “a very complex issue” and claimed it’d be “reckless” for the party to sign up quickly after the meeting.

“There’s a lot of questions. And you’ve got to understand when something like this is presented, obviously, for the first time, you need to sleep on it,” he told 2GB on Monday.

Mr Joyce and other Nationals MPs have given no assurances they would support the plan, saying they reserved the right to knock it back or withhold support.

Labor leader Anthony Albanese claimed the government was “hostage to a few people in the National Party”, accusing the Coalition of being “frozen in time”.

Nationals senator Matt Canavan, a staunch opponent of net zero, tweeted that “people are very angry with the Nationals Party in Canberra”, claiming his colleagues were “doing the right thing”.

But any net zero by 2050 target would not require unanimous support of the Nationals, or indeed any support from the rural party, with Mr Morrison firmly saying it would be the 23-member cabinet committee – with just four Nationals members – that would have the final say.

“That’s where these decisions are made. All members for the government understand that.”

It was a subtle rebuke to Mr Joyce, sitting just behind him on the government’s frontbench.

After the Nationals and Liberals separately considered the net-zero plan in their respective meetings on Monday, the Coalition is set to debate the plan for the first time as a group at Tuesday’s joint party room meeting.

Cabinet will then meet on Wednesday, but a final agreement might not be reached until next week’s cabinet meeting on October 27.

Once a decision is reached, cabinet solidarity dictates all members are bound to publicly accept and respect the result.

That would force Nationals members of cabinet – Mr Joyce, Bridget McKenzie, David Littleproud and Andrew Gee – to back a net-zero plan, even if they didn’t agree, or step down from the ministry.

Mr Joyce said it would be “bleeding obvious” that ministers would have to quit cabinet if they disagreed with a decision.

But asked if he thought the debate could split the Coalition, he responded “I hope not. We don’t suggest that”.

However, Mr Morrison gave a major concession in all but confirming the government would not take an increased 2030 target to Glasgow, like a 50 per cent emissions cut as had been urged by many climate experts.

Instead, Mr Morrison said he would “advise the COP26 in our success in meeting and beating” current targets of 26 to 28 per cent.

Mr Joyce had said it was “highly unlikely” the Nationals would back such a plan.

Climate scientists say 2030 targets are even more pressing than 2050 targets, with the next decade the critical time frame for arresting irreversible climate change.

The Australian Financial Review reported there could be “tens of billions” of dollars for regional infrastructure and communications projects on the table, as sweeteners for Nationals to back the plan.

But Mr Joyce rubbished those claims in question time on Monday, describing the report as “utter tripe” and saying “just because you read it, it doesn’t mean they said it”.