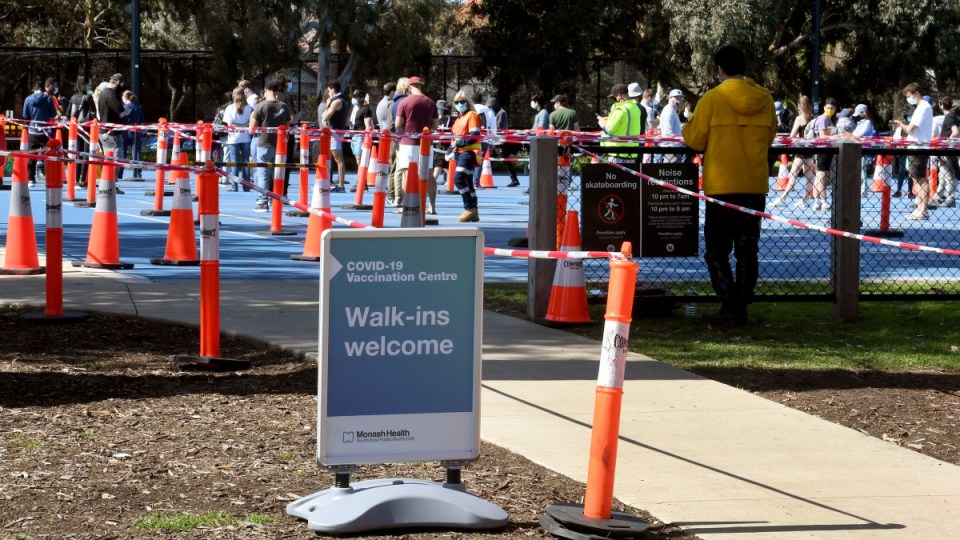 Victoria has confirmed another 2179 coronavirus infections and six deaths overnight, as the state begins to relax its border rules as vaccination climbs.

Friday’s figures were a slight drop after a shock record 2297 infections reported on Thursday.

They brought the total number of active cases in the state to 21,324.

The toll from the state’s Delta outbreak has reached 131 with the deaths of three men in their 80s, two women in their 80s and a woman in her 50s. All were from suburban Melbourne.

Friday’s cases included infections from about 1000 households that had not previously had COVID infections.

As of Friday, 63 per cent of eligible Victorians were fully vaccinated, while 88 per cent have had first doses. Victoria is on track to reach its 70 per cent double vaccination target ahead of the indicative date of October 26, triggering the end of Melbourne’s long-running sixth lockdown.

“Our Victorian data, based on the work that our clinical teams have done shows unvaccinated people here in Victoria now are more likely to catch COVID than somebody who is fully vaccinated, that is 10 times more likely,” Mr Weimar said.

Victoria has 695 people in hospital with COVID-19. They include 157 in intensive care and 101 are on ventilators.

Mr Weimar said only 2 per cent of ICU patients were fully vaccinated.

Elsewhere, Health Minister Martin Foley said the state would begin to relax border restrictions next week. From October 19, fully vaccinated travellers, including non-Victorians, will be allowed into the state from red and and orange zones (mostly in NSW and the ACT).

They must get tested within 72 hours of entry and then isolate until they have another negative test. There will be no quarantine requirement beyond that.

Those who are unvaccinated can still enter Victoria, but will be required to quarantine.

“The public health advice is, given the changing transmission patterns of the virus in both [Victoria and NSW] and the very high vaccination status of both states, these are sensible measures to get us gradually and safely to a measured reopening and returning at least these two states and the ACT into a more COVID-sustainable situation, more aligned with what we have had before the pandemic,” Mr Foley said.

The lockdown of the regional city of Mildura would be extended until at least October 22 “to get that into a more manageable situation”. There were more than 30 new cases in Mildura on Friday.

Vaccination rates in the north-west Victorian city have climbed, with first doses now above 90 per cent. But second doses remain lower than the state average.

Elsewhere, Victorians permitted to work on-site must show proof they have had their first vaccination, or a booking within the week to keep working.

The vaccine mandate came into effect on Friday for more than 1.25 million authorised workers across the state.

They must be fully vaccinated by November 26, and there are limited medical exemptions.