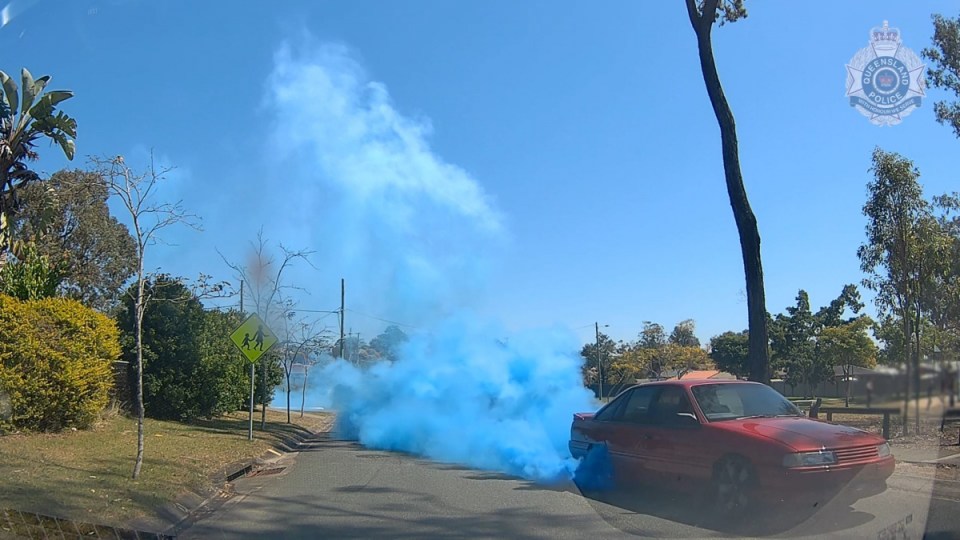 A man has been charged after hooning down a Queensland street doing burnouts and releasing blue smoke in a take on the gender reveal phenomenon.

A Queensland man who hooned down a residential street while releasing blue smoke in an unconventional gender reveal has landed himself in hot water.

Police have charged the 29-year-old after his very loud and public announcement about the sex of an unborn child was caught on camera by a female motorist.

The woman filmed the man’s red sedan fishtailing down the street while releasing a voluminous cloud of bright blue smoke at Logan, south of Brisbane.

As she turns into the street, she can be heard saying in a flat, unimpressed tone: “Right. Gender reveal. It’s a boy.”

As the sedan screeches past, her vehicle is entirely enveloped in the plume of smoke.

“Yeah you can’t drive at the moment,” she mutters.

The incident happened in September and was observed by a group of people who had gathered in the street to watch and take photos.

On Friday police revealed they’d identified the man and charged him with dangerous operation of a vehicle. He’s due to face the Beenleigh Magistrates Court on December 1.

Police told AAP they could not confirm if the man is the father of the unborn boy.

The gender reveal is a relatively new phenomenon. It typically involves expectant parents gathering family and friends together to reveal the sex of their baby.

But as with all things, some people like to take things to the next level – like the couple who shared footage purporting to show a wild tiger bursting a balloon filled with pink powder on a beach in Dubai.