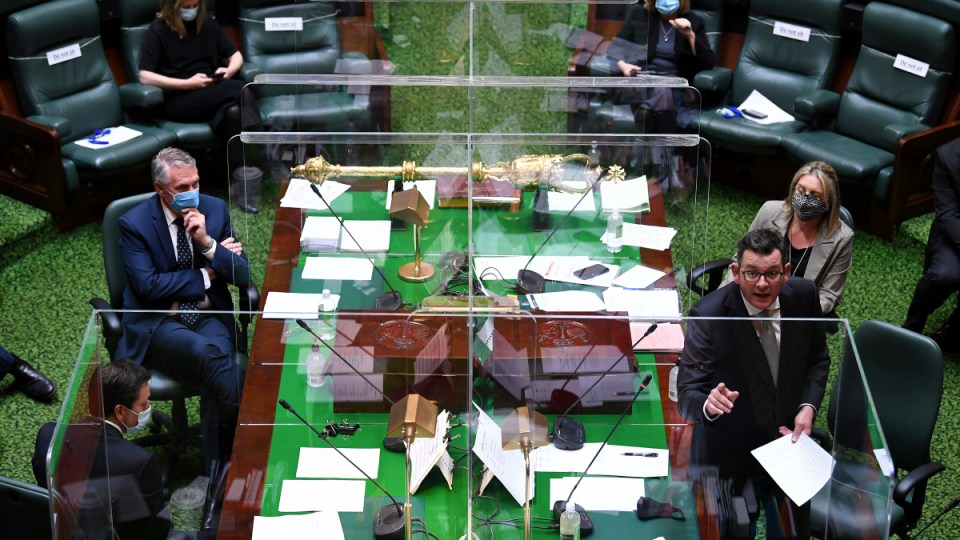 Victoria's parliament has become the first in Australia to ban unvaccinated MPs from entering. Photo: AAP

Victoria has become the first Australian state or territory to ban unvaccinated MPs from entering parliament.

All members and staff will now have to prove they’ve received at least one dose of a vaccine by Friday to continue working on site, or have an appointment booked before October 22.

They will also need to have their second dose by November 26.

The motion is in line with a vaccination mandate for all other Victorian authorised workers, which also comes into effect on Friday.

Any member who does not comply will be suspended from entering parliament until the second sitting day of the 2022 parliamentary year.

The motion passed the lower house on Thursday morning with the support of all but one MP, Liberal Neil Angus, who argued the requirement to show proof of the jab was “undemocratic” and “medical apartheid”.

During his speech Mr Angus cited Dr Simone Gold, who leads a group pushing misinformation about COVID-19 vaccines and was charged for taking part in the January 6 attack on the US Capitol.

The opposition’s Louise Staley and Greens’ Tim Read raised concerns with the motion, despite their support.

These included a constitutional issue with obstructing members from discharging their responsibilities, and the right to consent to healthcare.

Mr Angus is the only MP in the Liberal party room who isn’t vaccinated, and Opposition Leader Matthew Guy has conceded he won’t be able to convince him to get the jab.

“I can’t force a 60-year-old man to go and get a medical procedure. What I believe in is educating people as to why it’s so important,” Mr Guy told reporters at parliament.

He said the Liberal-National coalition supported the motion, given other authorised workers have to be vaccinated.

Premier Daniel Andrews said Mr Angus’ comparison of the vaccine mandate to apartheid was “not appropriate and deeply offensive”.

“Mandatory vaccination is about keeping people out of hospital, it’s about ending lockdown … it’s about freedom,” he said

All Labor MPs have had their first dose of a COVID-19 vaccine, with the “handful” who are not yet fully vaccinated booked in to receive their second dose in the coming weeks.

Liberal Democrat MP David Limbrick said he and party colleague Tim Quilty were fully vaccinated but would refuse to hand over proof and participate in parliament remotely to protest the rule.