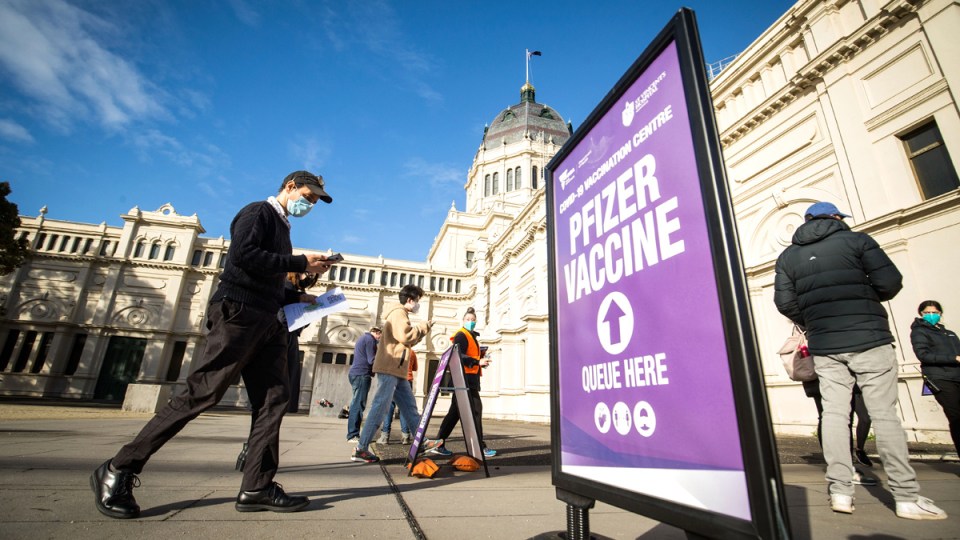 Mass vaccine centres at the Exhibition Building and other locations are shutting down. Photo: Getty

New South Wales is just weeks away seeing 90 per cent of eligible citizens fully vaccinated, with Victoria not far behind.

Victoria is taking big strides in the vaccination race, with experts predicting it will outpace roadmap targets.

NSW ended much of its lockdown restrictions on Monday and is on track to hit 80 per cent double doses for recipients over the age of 16 by the end of the week – if the current trends continue.

Victoria is also exceeding expectations, with at least one analyst predicting the state will not only reach its 80 per cent milestone ahead of schedule, but is fast heading for 90 per cent coverage among those over 16.

The COVID Live website projects Victoria will reach 70 per cent fully vaccinated by October 23, three days ahead of previous projections.

But the data analyst who runs the website, Anthony Macali, told The New Daily it could realistically happen as soon as October 21.

And he said the state could reach 80 per cent by October 30.

“It’s quite possible we could do better than that, but it would be pretty tight. That’s still well ahead of the indicative dates,” Mr Macali said.

The state’s roadmap out of lockdown indicates those targets will be reached on October 26 and November 3, respectively.

Premier Daniel Andrews said on Tuesday it would be a “fantastic problem” if Victoria reached its target sooner than predicted.

“We want to get to 70 [per cent] as fast as we can, so anyone who has a second appointment booked outside of October 26, if it could be brought forward, I would encourage them to,” Mr Andrews said.

Mr Macali said the vaccination rate had been accelerated by outbreaks, with numbers also spiking around the time the roadmap was released.

It offered a great motivator, he said.

“We should be proud of how these states have responded, because getting to 90 per cent of the adult population [first dose] is incredible,” he said.

As reported by The New Daily, Doherty Institute modelling indicates at 70 and 80 per cent full vaccination coverage in adults, freedoms can safely be gradually increased.

But in August, ANU modelling argued vaccinating 80 per cent of the population aged over 16 would not be enough.

“Vaccinating over 90 per cent of Australians, including children, is required to avoid substantial morbidity and mortality,” the modelling said.

With the two largest states by population on their way to vaccinating 90 per cent of adults, Australia is heading in the right direction.