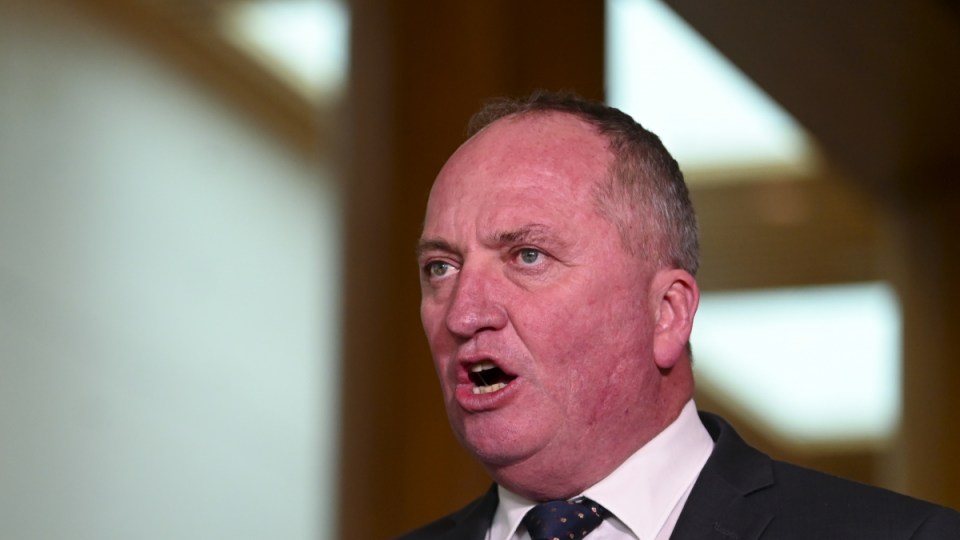 A government MP has revealed cash under the controversial Building Better Regions Fund was allocated after Coalition politicians lobbied for projects that didn’t meet infrastructure department criteria, with the help of a “colour-coded” spreadsheet.

The revelation was branded an “absolute scandal” by Labor, which claims it was given no such access.

“This is supposed to be an independent grants program, but instead we find that Barnaby Joyce and his Nationals mates have their fingerprints all over it,” Labor’s shadow infrastructure and regional development minister Catherine King said.

But Mr Joyce, the Deputy Prime Minister and Minister for Infrastructure, was adamant all projects funded were eligible and “value for money”.

Last week, nearly $300 million was allocated to Round Five of the Building Better Regions Fund – a program “to create jobs, drive economic growth and build stronger regional communities into the future” through projects “located in, or benefiting eligible areas outside the major capital cities”.

The BBRF has come under fire in the past for heavily favouring Coalition seats and ignoring Labor seats.

Analysis this week found that, of the $294 million under Round Five, 73 per cent of the cash went to Coalition seats, with just 16 per cent to Labor electorates and 11 per cent to seats held by independents.

Labor blasted the funding disparity as “pork barrelling” and “the latest in a long line of rorts”.

The Coalition backbencher said government politicians got a chance to “really push” for applications that didn’t meet the department’s strict eligibility criteria.

“The government actually gets very little say. So, the Department of Infrastructure goes through every project application, they make a list and they do colour code them in green and pink,” Dr Webster told Flow FM.

“Green is for projects that actually tick off the criteria for the fund and pink, they don’t quite. But if an MP wants to really push the project because it’s important for the community, then you’ve got the opportunity to do that.”

Although it may have been an innocent poor choice of words from Dr Webster, ‘colour-coded’ spreadsheets were a major part of the ‘sports rorts’ scandal, with concerns that some projects were prioritised or  rejected based on political election campaign concerns from the Coalition government.

“Coalition MPs were given the opportunity to lobby for projects that did not fully meet the eligibility criteria, while other parts of the country were left in the dark,” Ms King said.

“How many ‘green’ projects were denied funding because they did not suit the Coalition’s political interests?

“This is an absolute scandal.”

She demanded the government “immediately release these secret, colour-coded spreadsheets”.

The New Daily contacted the office of Mr Joyce, and the Department of Infrastructure, to request the spreadsheets in question.

Neither provided the document.

In a statement, a spokesman for Mr Joyce rebuffed Labor’s claims.

“The Office of the Auditor-General would expect nothing less than for the department to categorise projects according to their eligibility and value for money,” the spokesman said.

The Australian National Audit Office will release a report into the program in May.

TND asked about Dr Webster’s comments that Coalition MPs had the chance to “really push” for pink-coded projects, while Ms King claimed Labor was given no such opportunity.

Mr Joyce’s spokesman replied that “MPs of all political persuasions have the ability to advocate for projects in their communities”.

A spokesperson for the infrastructure department said it “does not have visibility of any representations made by MPs, and is unable to disclose information informing decisions of cabinet or likely to prejudice the commercial confidentiality of applicants or personal information”.

On Monday, Mr Joyce defended the program against accusations of “pork barrelling”.

“Is it pork barrelling? It drives me insane. Every time Sydney gets something, apparently it’s a great decision,” he said.

“Something magical happens – you cross over the Hawkesbury and it’s pork barrelling.

“I don’t care what they call it … They can call it what they like.”

Greens infrastructure spokesperson Sarah Hanson-Young claimed the government had been caught with its “hands in the cookie jar”.

“Another day, another colour-coded spreadsheet for pork barrelling by the Morrison government. Their lack of integrity is on show once again,” Senator Hanson-Young said.

“Australians expect and deserve better when it comes to how the government gives out taxpayer dollars, especially in our local and regional communities.”