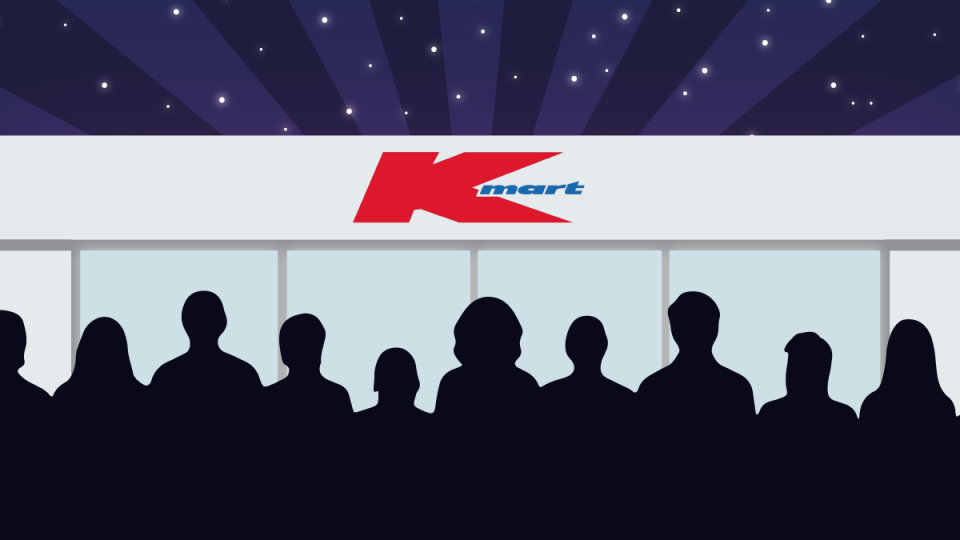 Australia watched with wonder and amusement on Monday as social media feeds and news bulletins were filled with vision of newly ‘freed’ Sydneysiders flocking to their local Kmart.

After 106 days of lockdown and 63,000 COVID cases, the state passed its 70 per cent double-dose vaccination milestone and many businesses reopened.

Gyms, cafes, restaurants, shops and hairdressers all threw open their doors to customers, while residents were finally allowed to travel more than five kilometres from their homes.

Videos quickly emerged on social media in the early hours of Monday, showing long lines of shoppers waiting to get into Kmart.

Another pondered what anyone could possibly want from Kmart in the middle of the night.

“A taste of lockdown freedom,” someone quickly responded.

Others felt it related more to the goods that Kmart offers, with some joking that the ability to buy cushions after midnight was a drawcard.

Like that TikTok user, you may also be wondering what drove people to Kmart, of all places, at the stroke of midnight.

Experts said although the vision focused on lines at Kmart, the discount chain was just one of many venues overrun by eager customers as people rushed to make use of their freedom.

Queensland University of Technology retail and consumer behaviour expert Gary Mortimer said the rush extended across the retail sector and into hospitality.

A pent-up demand to get out and do all the things limited by virus restrictions caused a rush on those services, he said.

“For the rest of this week, people will be keen to get out, taking selfies of themselves at a restaurant, at a bar, or in a retail store, engaging in that activity that they’ve not engaged in for some time,” Dr Mortimer said.

We saw something similar occurring in Victoria last year, with midnight madness as stores flung open their doors after months of COVID-19 closures.

Kmart CEO John Gualtieri wrote to customers before Monday’s reopening, inviting them back and offering assurances around COVID safety.

“We’ve had to learn new ways of being together, while being apart. We’ve lost special moments and precious time with our loved ones … But there seems to be light at the end of the tunnel,” Mr Gualtieri wrote.

Eek, but was it safe?

For some watching at home, the long queues and packed stores were difficult to understand and even frightening.

For every video posted to social media celebrating a return to the shops, there were comments expressing concerns about the crowds in coronavirus-hit areas.

Kmart has assured The New Daily that stores implemented COVID-safe practices to keep shoppers and team members safe and ensure no stores exceeded capacity limits during the rush.

Dr Mortimer said a fearful reaction to the footage was understandable.

“It’s not unreasonable to think that some people sitting at home watching that footage might be hesitant to actually go out in the initial stages,” he said.

The opposite reactions represent two different types of consumers: The ‘innovators’ and the more risk averse.

Dr Mortimer said the ‘innovators’ will be driven by the fear of missing out and the social benefits of being back in stores and at restaurants.

As the vaccination rate continues to rise and the focus shifts away from case numbers, the risk averse will feel more confident about returning, too.

Dr Mortimer said people flocking back to shops also spelled good news for the economy – offering hope for retailers and hospitality venues doing it tough and encouraging them to take on more staff.

“All good news as we lead into a busy Christmas trading period”, he said.

‘A taste of lockdown freedom’: Why Sydney residents rushed Kmart at midnight