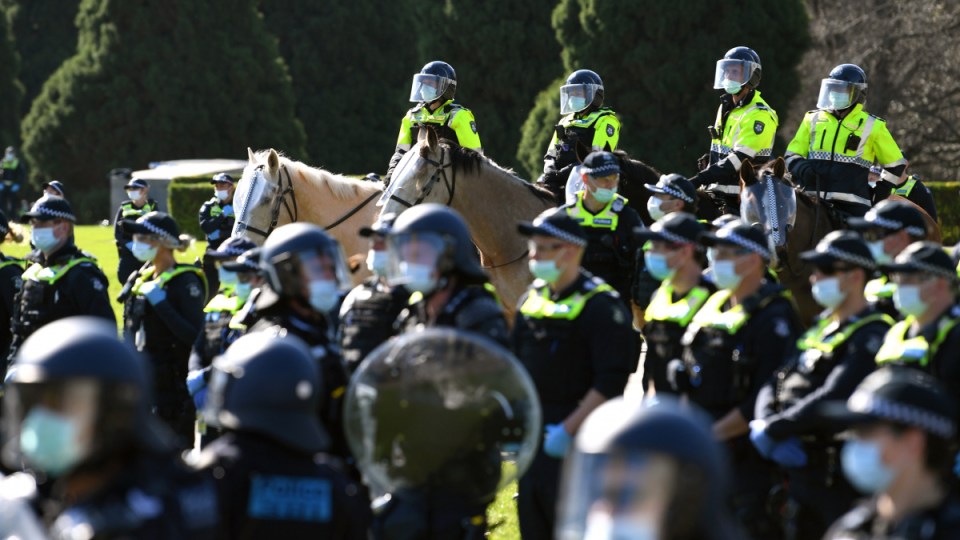 A Victorian police officer is in a serious condition in hospital after contracting COVID-19, with at least one other officer infected with the virus, after both worked at an anti-vaccine protest in Melbourne.

He said one of the officers was transferred to hospital early on Thursday morning after his condition deteriorated.

“It highlights the risk our members face in this pandemic, and heightens the need for us to make sure they’re protected at work.”

Hundreds of people gathered in Melbourne CBD a fortnight ago to protest against mandatory vaccinations in the construction industry.

The construction union believes at least seven infections had been recorded among people who attended CFMEU headquarters for a rally on September 20.

Mr Gatt did not confirm whether the two infected police officers had been vaccinated, but said 25 members at the police station had been stood down due to potential exposure to the virus.

“The remaining members that are vaccinated have been tested since being stood down and have not tested positive,” he said.

A Victoria Police spokeswoman said “a number of employees from many and varied locations” had tested positive for COVID-19, with the positive results “directly linked to their role”.

“Our utmost priority and focus is to ensure our members safety and welfare and as such all impacted officers are supported, offered assistance and guided through any and all health, safety and quarantine measures,” she said in a statement

“For operational reasons, numbers will not be provided on how many officers and support staff are placed into quarantine.”

It comes after Victoria reported 1638 new local infections and two deaths on Thursday, the second-highest daily case figure of any state or territory since the pandemic began.

The latest deaths are two women aged in their 60s and 70s from Melbourne’s north and west, bringing the current outbreak’s toll to 70.

The virus is increasingly spreading in the regions, with another 115 new cases detected spanning from the City of Latrobe in the state’s east to Mildura in the northwest.

Premier Daniel Andrews said daily cases were “higher than we’d like them to be” and urged Melburnians and regional residents in lockdown to follow the rules for a couple more weeks.

He has no plans to alter Victoria’s roadmap out of lockdown, despite newly installed NSW Premier Dominic Perrottet accelerating his state’s reopening after it reached the 70 per cent double-dose milestone on Wednesday.

Victoria’s more cautious roadmap is designed to protect the health system from being overwhelmed by COVID-19 hospital admissions as the state reopens.

There are now 564 Victorians in hospital battling the virus, up 39 from Wednesday, with 115 of those in intensive care and 74 on a ventilator.