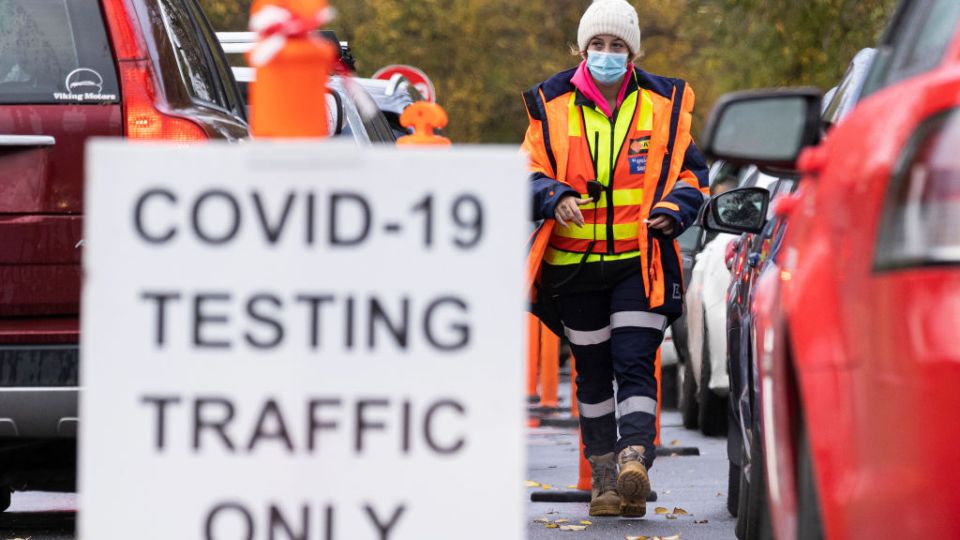 Victoria has confirmed another 1638 local COVID cases, as a Melbourne principal contests a suspension for breaking virus rules.

Another two deaths were also reported on Thursday, taking the state’s toll from its Delta outbreak to 70.

It is the second highest daily tally for Victoria, and the eighth consecutive day with more than 1100 cases. The number of active cases has passed 15,000.

The new infections were detected from 77,238 tests, while 36,672 vaccinations were administered at state-run sites in the same period.

As of Wednesday, 83.6 per cent of Victorians aged over 16 had received a first dose of the vaccine, while 54.5 per cent were fully vaccinated.

The latest figures come as a Melbourne principal temporarily lost his registration after inviting students to attend his school despite lockdown rules.

More than 30 coronavirus infections have been linked to an outbreak last month at Fitzroy Community School, which spread to students, teachers and household contacts.

The independent primary school of 60 students had asked all parents to keep sending their kids to class, a move it has publicly defended.

Principal Timothy Berryman was handed an interim suspension by the Victorian Institute of Teaching, pending an investigation. The suspension came into effect on Wednesday.

VIT has the power to suspend a teacher’s registration if it believes “the teacher poses an unacceptable risk of harm to children” or it is “necessary to protect children”.

Mr Berryman described the suspension as frustrating and claimed school closures represented a “much greater risk” to children’s wellbeing than the impacts of catching COVID-19.

“It’s very odd that I’ve been portrayed as the bad guy when I’ve been trying to look after the children as good as possible,” he told ABC Radio Melbourne on Thursday.

He plans to fight the interim suspension.

Meanwhile, authorities are racing to identify vulnerable young patients who were exposed to a virus outbreak at a major Melbourne children’s hospital cancer ward.

A patient’s parent spent at least four days at the Royal Children’s Hospital in Parkville while infectious between October 1-4.

The hospital’s Kookaburra cancer care ward has been identified as a tier one exposure site, and its main street walkway has been listed as a tier two site for September 26.

RCH chief executive Bernadette McDonald said all affected patients, parents or carers have been put into single rooms at the hospital to quarantine for 14 days.

No child in the cancer ward had tested positive as of Wednesday evening, but the hospital has 12 COVID-19 positive patients under its care, with four in other wards and eight being treated at home.