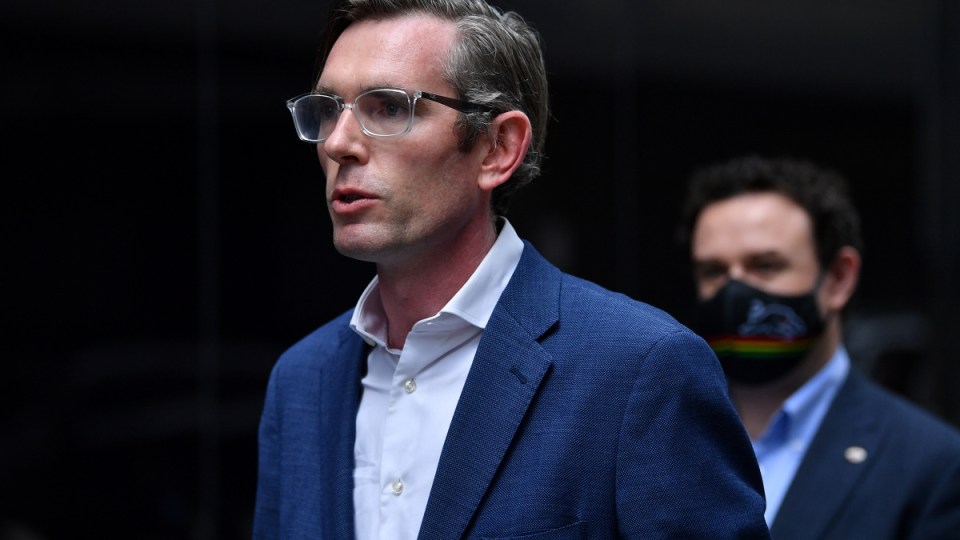 Premier hopeful Dominic Perrottet and the man who would be deputy Stuart Ayres address media on Sunday. Photo: AAP

New South Wales Treasurer Dominic Perrottet is likely to become the state’s next premier after nominating for the top job and striking a deal to make Stuart Ayres his deputy.

After behind-the-scenes factional wrangling for much of the weekend, Mr Perrottet announced on Sunday he would seek to become the next premier.

The ABC reports the father of six has the numbers to win a Liberal leadership ballot scheduled for Tuesday.

Despite this Planning Minister Rob Stokes indicated he was still planning to run and said he would speak to his supporters on Monday morning.

“I’m still keen to run, but ultimately it’s up to them. I remain committed to giving them a choice,” Mr Stokes told ABC.

He’s a member of the Liberal Party’s right faction while Mr Ayres, the jobs minister, is from the dominant moderate faction.

“I’m part of a team that has one focus and that is to look after every person across this state,” Mr Perrottet said.

“And I believe Stuart [Ayres] and I will provide that unity that the people of NSW need.”

“I know that this is a time of challenge in our state but I have complete hope and optimism that NSW is in a very good place..

“We believe this is a team that will provide stability, unity and experience and continue the great work of Gladys Berejiklian.”

Planning Minister Rob Stokes is the only other senior NSW cabinet minister to throw his hat in the ring for the premier job.

“His background, his experience as treasurer and very importantly his commitment to economic reform mean that he, of all of them, is the best person to take over the helm,” Mr Howard told Sky News.

Mr Perrottet earlier on Sunday said he was flattered by the endorsement.

Premier Gladys Berejiklian announced her resignation on Friday after the state’s corruption watchdog disclosed the 51-year-old was under investigation for potential breaches of public trust.

The Independent Commission Against Corruption is investigating whether Ms Berejiklian “exercised public functions” in a position of conflict given her secret five-year relationship with ex-MP Daryl Maguire.

Transport Minister Andrew Constance on Sunday said he’d resign from NSW parliament and run for the federal seat of Gilmore.

Mr Constance will resign from state politics by year’s end and will seek Liberal preselection for his local seat of Gilmore, on NSW’s south coast.

Attorney-General Mark Speakman said in a statement on Sunday he would not nominate for the NSW leadership but would remain in government.