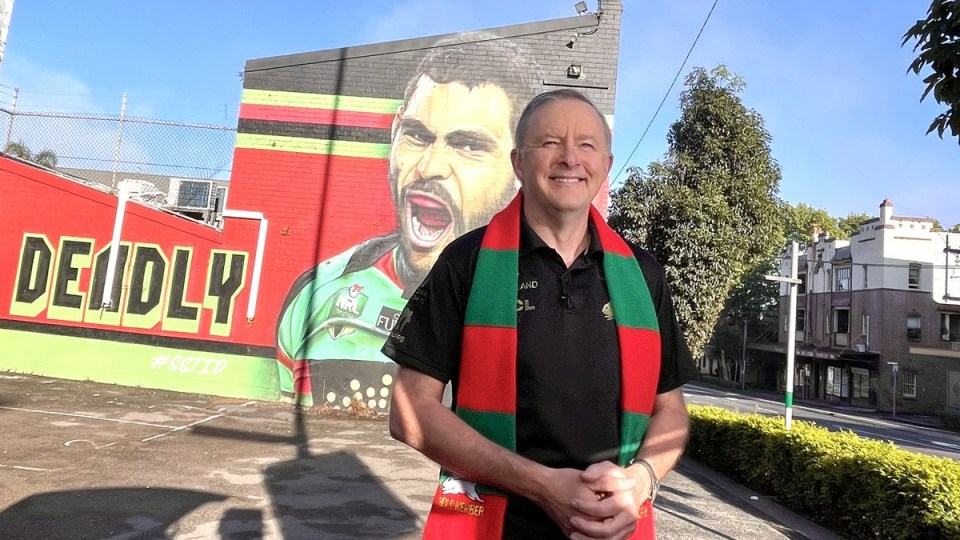 But while expressing genuine excitement, he’s also been sending coded sledges to Scott Morrison, in a media blitz across Australia’s biggest footy platforms, without even mentioning the Prime Minister’s name.

In the past week, Mr Albanese has done at least 13 interviews on the Rabbitohs.

Between those radio spots, he wrote an opinion piece in Sydney’s Daily Telegraph, did a Redfern Oval photo shoot with Rabbitohs legends John Sutton and Bob McCarthy, clamped a Souths flag to his Comcar, gave a lengthy interview to NRL.com for a feature article on his life-long love affair with the team, and posted countless footy pics to his social media.

“What’s the big deal?” you may ask. It’s just a guy who is happy about his team making the grand final, and it’s not like we haven’t seen Liberal MP Tim Wilson plastering his social media with Melbourne Demons photos in the lead-up to the AFL grand final, Scott Morrison lapping it up at Sharks games, or various politicians wearing scarves and ties in their team colours inside Parliament.

Absolutely. There’s no question Mr Albanese is stoked for his team.

As he reminded media hosts all week, he was part of the Rabbitohs board that got them back in the competition; he can rattle off names of obscure players from games he watched as a kid; and as he says, he “came out of the womb red and green”.

But leaving aside that vivid mental picture, delving into his actual words reveals something deeper than sport.

“Sport is about loyalty. It is about passion and emotion,” went the caption on a photo of Mr Albanese, decked in a well-worn retro jersey, tossing a footy.

“It is a part of who you are. It’s about your identity and that sense of belonging,” he told Triple M Sydney.

He spoke of attending games with his mum, following the Rabbitohs through good times and bad, and never giving up on the team.

If it’s not obvious, Mr Albanese’s dozen interviews about the Rabbitohs have been about, in no small way, sledging Mr Morrison.

They’re about setting up a contrast between the Prime Minister, who became a Sharks supporter later in life, and life-long footy tragic Mr Albanese.

It’s a message that Labor have pushed in one way or another for more than a year now, trying to paint Mr Morrison as inauthentic, shallow and “the marketing man” who stands for little.

It’s the idea behind every Labor politician dropping the word “spin” into their press conferences and media releases; the “all photo op but no follow up” sledges; even Labor’s campaign slogan, “On Your Side”.

The aim is to portray Mr Morrison as being only out for himself.

And when Mr Albanese’s Rabbitohs went deep into the NRL semi-finals, Labor’s team spotted an opportunity to extend that theme to the tribal world of Australian sporting allegiances.

Pop culture website Junkee published an article in mid-September pointing out Mr Morrison’s previous allegiances as a diehard rugby union fan growing up in Sydney’s eastern suburbs, then a diehard AFL fan, before he became a diehard NRL fan after moving into Sharks territory in Cronulla.

It’s something that has been pointed out before, but in NRL finals time, Labor’s team pounced.

Several opposition MPs made social media graphics highlighting pull quotes from the Junkee article, or shared it directly on their own pages.

Lo and behold, in a Deirdre Chambers (Muriel’s Wedding) coincidence, the article came up directly in a Newcastle radio interview this week, where the host told Mr Albanese: “I did read an article yesterday about ScoMo, apparently he’s a bit of a flip flopper”.

Mr Albanese responded: “Absolutely … I was there in 1971. I doubt whether he was there or even knew that it was happening in ’73 or ’78 when Cronulla made the grand final.”

“I am a life-long South Sydney supporter. That’s the difference,” he added.

In every interview, Mr Albanese spoke of “loyalty”, “identity” and “belonging”, of growing up hardscrabble in Sydney council housing with a single mother, of cherished childhood memories at footy games.

The insinuation is clear: As a johnny-come-lately to NRL, Mr Morrison wouldn’t know what it’s like to live and die by the fortunes of your team, to suffer through lean seasons and celebrate the glory of hard-won success.

The PM has made “the Sharkies” part of his brand in recent years – barracking at games, lapping it up with players in the sheds, and even nicknaming his plane “Shark One”.

But, of course, switching team allegiances or getting interested in a new game later in life is hardly a cardinal sin.

Whether Mr Morrison picked up NRL fanaticism from birth or just last week doesn’t make a lot of difference.

But for Mr Albanese, who faces concerns that voters don’t know a lot about him on a personal level even after 25 years in Parliament, playing up this side of his personality ticks a few boxes.

There had been concerns from some in Labor that, even at his budget reply speech in May, he was still having to repeat his “log cabin” story for the benefit of disengaged voters – of growing up poor, working hard, loving his mum and backing the Rabbitohs.

This week has been about hammering home that log cabin story.

Getting air time on footy-focused radio stations, which normally wouldn’t touch politics with a 10-foot pole, doesn’t hurt either.

As we get nearer to the federal election, to be held before May, expect the rhetoric around authenticity and loyalty to be dialled all the way up.

Anthony Albanese’s Rabbitohs fandom is about more than football