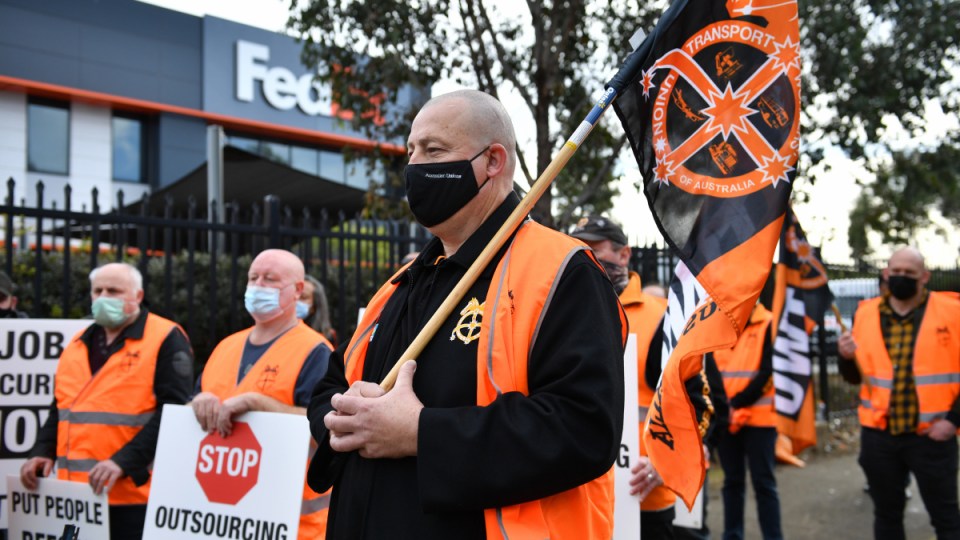 More delays are inevitable as FedEx parcel delivery workers strike for 24 hours over job security, a week after StarTrack workers walked off the job. Photo: AAP

Thousands of workers at a major parcel delivery service have walked off the job across the country – the second courier strike in as many weeks – putting more pressure on the nation’s stretched postal system.

The action follows a walkout by up to 2000 StarTrack employees last week, with workers at both companies taking action to stop the outsourcing of work to contractors and companies such as Amazon.

The Transport Workers Union said the outsourcing was causing an insecure work crisis at FedEx, with some owner-drivers paid about 25 per cent less to do the same work as employees.

“[FedEx] has made a net income profit of $5 billion in the last year,” national secretary Michael Kaine said on Thursday outside FedEx offices.

“These workers are asking for what? For an assurance that the job will be here tomorrow, next week and the week after.

“That is not too much to ask.”

The union said workers wanted job security, caps on outside hire, for existing employees to be guaranteed work before contracting out, and for ‘same job, same pay’ provisions for outside hire as employees.

Those were assurances workers had traditionally been given and recent history had proven them essential, Mr Kaine said.

“We need these assurances in writing, otherwise we get a situation like Qantas … [which] signs off on a deal with workers one day, and then contracts out their work by the thousands the very next,” he said.

The industrial dispute was particularly insulting after transport workers proved to be “some of the heroes of the pandemic”, Mr Kaine said.

“In return for that, they are being kicked in the guts by transport companies.”

Delays are inevitable as a result of the industrial action but FedEx employees had not taken the decision to strike lightly, Mr Kaine said.

Australians are already facing longer than usual wait times for deliveries, with more people shopping online while shops are closed as much of the country endures months of lockdown caused by the COVID-19 crisis.

FedEx said while negotiations with the TWU were ongoing, the decision to strike was disappointing.

The delivery company said it paid higher wage rates and superannuation than its competitors and the offer on the table was equally competitive.

FedEx has agreed to reduce outside hire where possible but said TWU’s demand for an increase in rates to these external companies would not benefit their employees and job security.