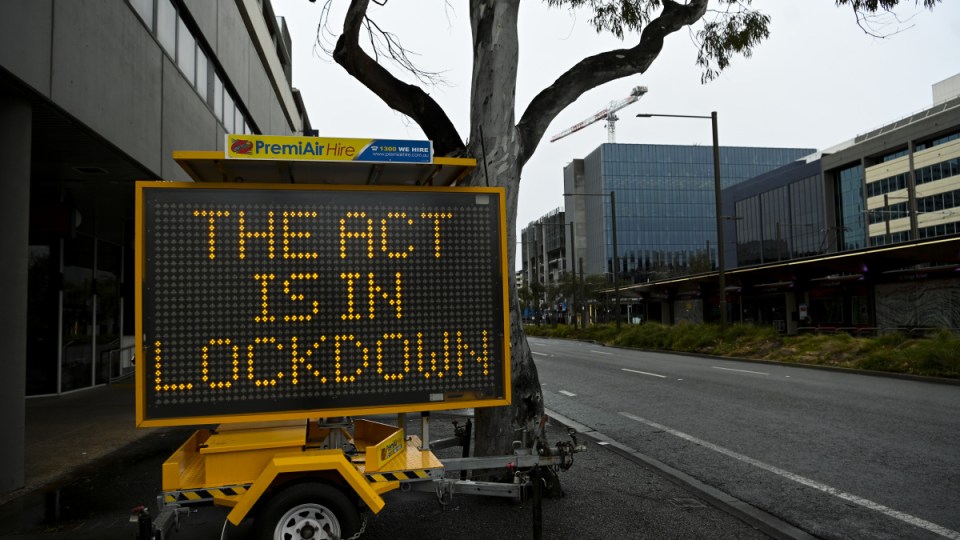 The federal government’s plan to cut COVID-19 support payments for workers hit by lockdowns has been savaged as “cruel” and a “kick in the guts”, with the Prime Minister’s modelling showing widespread shutdowns could still occur after 80 per cent vaccination.

But the Doherty Institute modelling, underpinning the national reopening plan, shows lockdowns could be needed for as much as half the year, unless “low-level” public health restrictions – like strict capacity limits – are kept in place.

That could mean industries like hospitality and entertainment, which will remain under strict rules and unable to get close to fully reopening for the foreseeable future, will miss out on future federal support.

“While businesses remain at reduced capacity and workers are still not back at work there should be support payments,” Australian Council of Trade Unions president Michele O’Neil said.

“Cutting off payments while lockdowns and restrictions are still expected is dangerous and short sighted.”

Mr Frydenberg announced on Wednesday the federal government would scale back its income support for lockdown areas, through the COVID disaster payment, once states surpassed 70 per cent adult vaccination rates.

“It’s about doing our best to bring to an end these lockdowns so Australians can get their lives back.”

Australian Council of Social Service CEO Dr Cassandra Goldie called it “unconscionable” to use vaccination rates as the trigger to cut payments, fearing it would dump countless people onto welfare if their jobs didn’t return.

“Lockdowns and further restrictions are real possibilities, and we must ensure restrictions can be applied to keep us safe, with people affected confident they will have adequate economic support through social security arrangements,” she said.

Mr Frydenberg said the Doherty modelling found lockdowns would be “unlikely” beyond 80 per cent vaccination, and that if needed, they would be “temporary and targeted”.

But it’s not quite that simple. Lockdowns won’t necessarily be over.

It is true that the Doherty Institute modelling forecasts that if Australia reaches 80 per cent vaccination, maintains “low-level” public health restrictions, and keeps even partial contact tracing effectiveness, the time needed in “high” public health and social measures (PHSM) like lockdowns would be zero.

“At 70 per cent vaccination coverage, the number of strict lockdowns would be significantly reduced,” the Doherty modelling states.

But that relies on a number of factors, the most fundamental being the “low-level” restrictions.

Doherty makes a number of assumptions about PHSM in place at any given time, including that there are always at least “baseline” restrictions of the level seen in NSW in March 2021, when life was largely back to normal besides less obtrusive capacity measures and check-ins.

“Low level” restrictions, the next level up on the PHSM table, are modelled on NSW’s restrictions in August 2020.

Those included more stringent capacity limits, bans on dancing and singing at weddings, funerals limited to 100 people, limits of 10 home visitors, and limiting groups at hospitality venues to 10 people.

If Australia opened up at 80 per cent, but with only the “baseline” rules instead of the “low level” rules, and an “optimal” contact tracing system, then Doherty forecasts “strict” lockdowns would be needed for 5 per cent of the year.

But Doherty says that, far from keeping contact tracing at “optimal”, it is “more likely” its effectiveness will drop to “partial” when cases are in the thousands per day, as expected upon reopening.

A combination of opening up at 80 percent, with “partial” contact tracing and baseline rules, sees Doherty forecast strict lockdowns needed for 31 per cent of the year.

The percentage of time needed in “moderate” lockdowns is even higher in each scenario – up to 51 per cent under baseline restrictions and a partial contact tracing effectiveness.

Mr Frydenberg is correct in that strict lockdowns would be less needed, and for less time, once vaccination rates are very high; they would also likely be more targeted, with a more surgical shutdown rather than blanket rules.

Hospitality, entertainment to miss out

Of course, Australia is more likely to keep the “low-level” restrictions in place for the future, rather than the “baseline” rules, in a hope to keep lockdowns to a true minimum.

Those behind NSW and Victoria’s reopening plans are at pains to point out strict capacity limits on hospitality, home gatherings and public events for the foreseeable future.

Victoria’s plan, in particular, is more cautious than NSW, with the roadmap including keeping capacities at one person per four square metres, and limits of 150 people in entertainment spaces.

But keeping lockdowns down could mean an indefinite extension of those “low-level” rules.

Those rules are modelled on NSW’s rules in August 2020, which mean strict caps on events, recreation and hospitality, and potentially an indefinite extension of the “two-square-metre” rule.

It means those sectors will potentially not return to full operation for the foreseeable future.

Essentially, to avoid lockdowns for a whole state, certain industries will have ongoing and indefinite restrictions on their operation. But the federal government won’t be helping ease the financial blow.

Mr Frydenberg, asked about these sectors, said the welfare system “safety net” would be available for affected workers.

NSW Premier Gladys Berejiklian said she was still talking to federal counterparts about how the changes would hit, and how industries would be supporters.

What about workers in affected industries?

Labor leader Anthony Albanese called it a “kick in the guts” for industries still affected beyond 80 per cent vaccination.

“There’s thousands of people in hospitality, the arts, and tourism who are unable to return to work yet,” he said.

“Hospitality, entertainment, arts and retail venues will still be under restrictions even when states begin to come out of lockdown. Nothing will ‘snap back’ overnight,” she said.

Ms O’Neil said the payments should be kept until “all workers are back to pre-COVID normal at work and lockdowns and restrictions are no longer required”.

Those payments were worth $1.029 billion in the past week alone.

There had been 3.66 million claims for the COVID-19 disaster payment received, with 2.02 million people paid a total of $9.06 billion.

Lockdowns could still happen after 80 per cent vaccination, so who will pay for them?