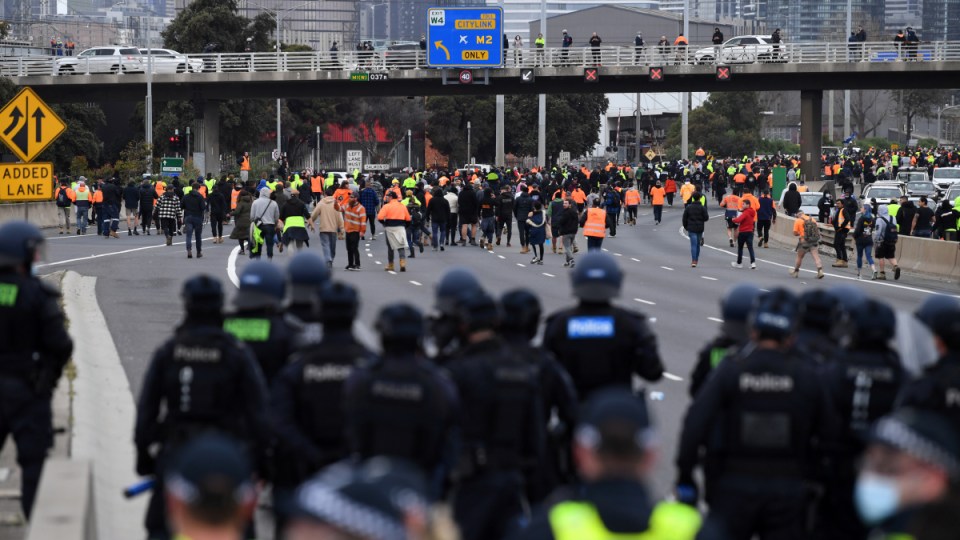 The Victorian Greens are calling for a parliamentary inquiry into the influence of the far right in the state.

Leader Samantha Ratnam on Friday announced she will move a motion for an inquiry into the rise of the political movement and its links to anti-vaccination conspiracy groups when parliament resumes in a fortnight.

It comes after protests against tearoom bans and mandatory COVID-19 vaccination for construction workers morphed into a wider anti-lockdown and anti-vaccine movement.

For five consecutive days, hundreds of protesters have clashed with police and stormed Melbourne landmarks, including the West Gate Bridge and the Shrine of Remembrance.

The construction union has claimed while some construction workers were involved, the protests have been hijacked by “neo-Nazi’s and right-wing extremists” dressed in high-visibility clothing.

On Friday, police arrested dozens of people in central Melbourne, but there was no sign of another rally.

Ms Ratnam said the fear and anxiety of the pandemic had provided a “breeding ground” for dangerous ideology and that it needed to be investigated as a matter of urgency.

“The growing presence of far-right nationalists sends a chill down my spine,” she said.

“I was once harassed and followed from my office by right-wing extremists. It was frightening. And the attacks on me online have increased over the last year.”

A federal parliamentary inquiry is already investigating the rising threat of right-wing extremism.

Victoria University academic Debra Smith told AAP that while this week’s rallies appeared to have some right-wing elements, protesters were mostly linked only by anti-government sentiment.

She questioned what another inquiry would achieve given the probe already under way, and predicts the unrest in Melbourne will run out of steam.

“Ultimately these movements are sustained by emotion, eventually that gets tiring and it will peter out,” Dr Smith said.

But she agrees the pandemic unrest has created a fertile recruitment ground for extremist groups.

“The danger is how many people have made connections with extremists that will continue down the track.”

The proposed inquiry would investigate far-right, right-wing nationalist and neo-Nazi groups, their methods of recruitment and communication and the risk their actions pose, particularly to Victoria’s multicultural communities.