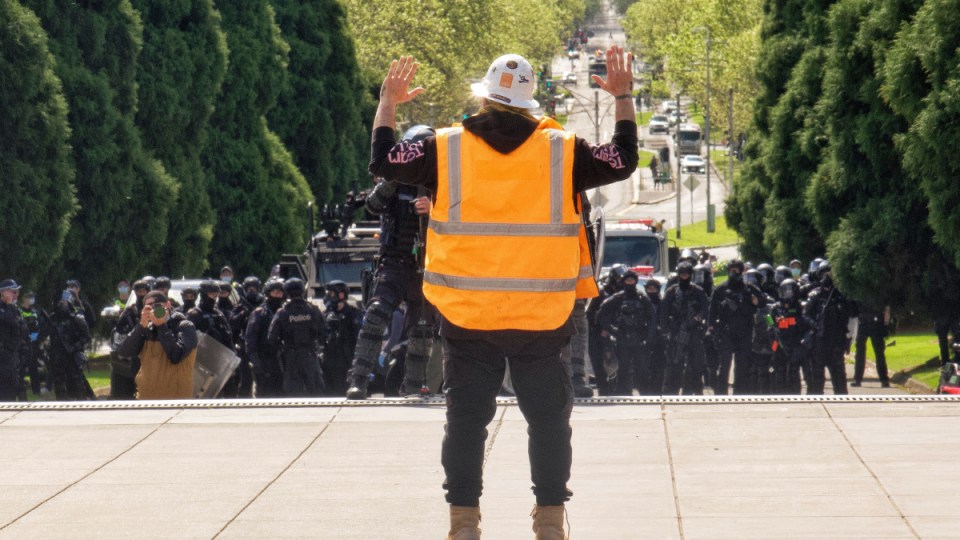 A man who attended the anti-lockdown protest in Melbourne's CBD on Wednesday is among the 733 COVID cases recorded in Victoria.

Victoria has confirmed 733 new cases of coronavirus, including a man who attended an anti-lockdown protest.

Another death has also been recorded, with health authorities to provide further details later on Friday.

It takes the toll from the current outbreak to 21, while the new infections bring the number of active cases in the state to 7160.

There were 56,520 coronavirus tests processed and 41,029 vaccine doses administered at state-run hubs on Thursday.

A man who attended the anti-lockdown protest in Melbourne’s CBD on Wednesday, which descended on the Shrine of Remembrance, is being treated in hospital for COVID-19.

His case was reported on Thursday afternoon, but has been included in the official tally for Friday.

“We are urging protesters to get tested should they experience COVID-like symptoms, no matter how mild.”

Deputy chief health officer Deb Friedman had warned the out-of-control protests could become super-spreader events, given the infectiousness of the Delta variant and the fact most protesters flouted mask and social distancing rules.

The protests initially began in opposition to mandatory COVID-19 vaccinations for the construction sector and the closure of building site tea rooms but morphed into a wider anti-lockdown and anti-vaccine movement.

The fourth day of protests on Thursday, however, was a non-event, with demonstrators largely a no-show despite flagging potential meeting sites.

Victoria Police made 92 arrests for breaches of public health orders, as well as other matters including outstanding warrants.

Police are preparing for further protests on Friday.

The state has also reached a vaccine milestone, with 75 per cent of Victorians aged 16 and above now having received their first doses.

It comes after two state-run vaccine hubs were forced to close temporarily on Thursday due to alleged “abuse” from anti-vaccine protesters.

From September 30, double-dosed Victorians stuck anywhere in NSW can come home if they return a negative test 72 hours before departure, isolate at home for 14 days and get tested at the start and end of quarantine.