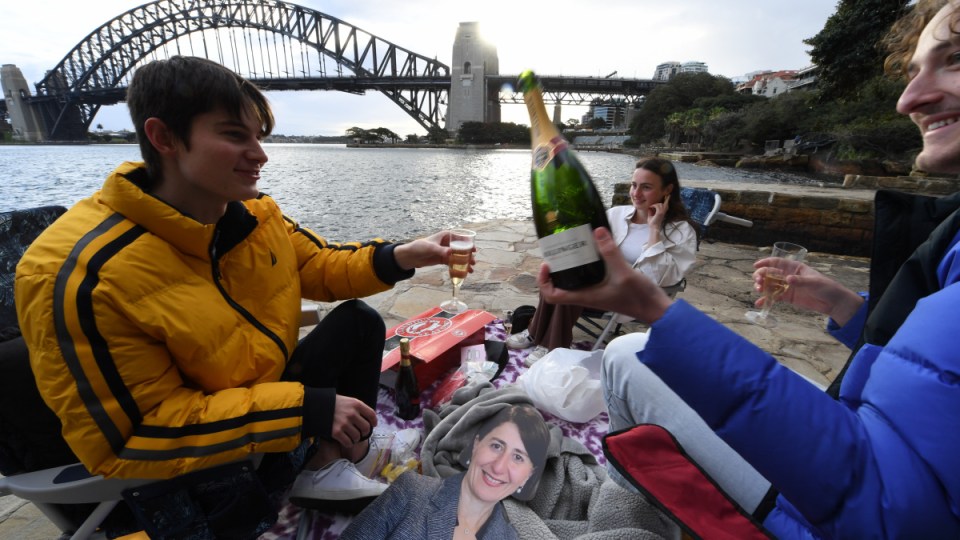 Fully vaccinated residents can go on picnics, but total freedom is still a while away. Photo: Getty

Locked down NSW residents are inching closer to being granted more freedoms, as vaccination rates continue to climb across the state.

But Premier Gladys Berejiklian issued a stern warning against complacency on Friday as health authorities look to manage expectations.

The anticipated reopening, triggered when the state reaches 70 per cent double-dose vaccination coverage, should not be seen as “Freedom Day”, Ms Berejiklian said.

While saying the state “almost gallops to the finish line”, to hit the projected full vaccination target, people must still behave responsibly, she said.

“I’m always wary of using terms like Freedom Day because when we start to open up it must be step-by-step, it has to be done cautiously,” the Premier added.

NSW reported 1043 new locally acquired cases of COVID-19 in the 24 hours to 8pm on Thursday, 20 fewer than the day before.
Eleven people died, of whom 10 were unvaccinated.

Chief health officer Kerry Chant said authorities were seeing “pleasing declines” in case numbers, but everyone needed to do their part to “hold the course”.

“It is really important that we continue to act responsibly,” Dr Chant said.

“We’ll always have to be mindful that COVID exists … It’s not going to be back to normal.”

NSW residents are expected to need booster shots and must keep listening to health advice when outbreaks occur, even when vaccination rates are higher, she said.

Ms Berejiklian said the government would also “imminently” reveal what further freedoms were reinstated when the state reached 80 per cent double-dose coverage.

“The challenging question after that is when will unvaccinated people be able to participate in those activities,” she said.

The freedoms to be reinstated once the state reaches the 70 per cent target next month are limited to those who are fully vaccinated.

Those who have not received two jabs will not be able to attend restaurants, shops, pubs and other places that are set to reopen.

Authorities are keen to push vaccination rates even higher than the 80 per cent target and get into the 90s.

Some council areas have already reached it – with more than 95 per cent of eligible people at least partially vaccinated in Camden, and Blacktown and Campbelltown are not far behind.

One-third of NSW kids aged between 12 and 15 have already been vaccinated despite being eligible for the jab for less than a fortnight.

At least 84 per cent of NSW residents have had at least one COVID-19 vaccine dose, and more than 56 per cent are fully vaccinated.

Both were diagnosed with COVID-19 after death, Dr Chant said.

An Indigenous man in his 50s died at Broken Hill in the state’s west.
It takes the death toll for the current outbreak in NSW to 277.

The Glen Innes and Orange local government areas exited lockdown on Friday, but the lockdown in Hilltops will remain.