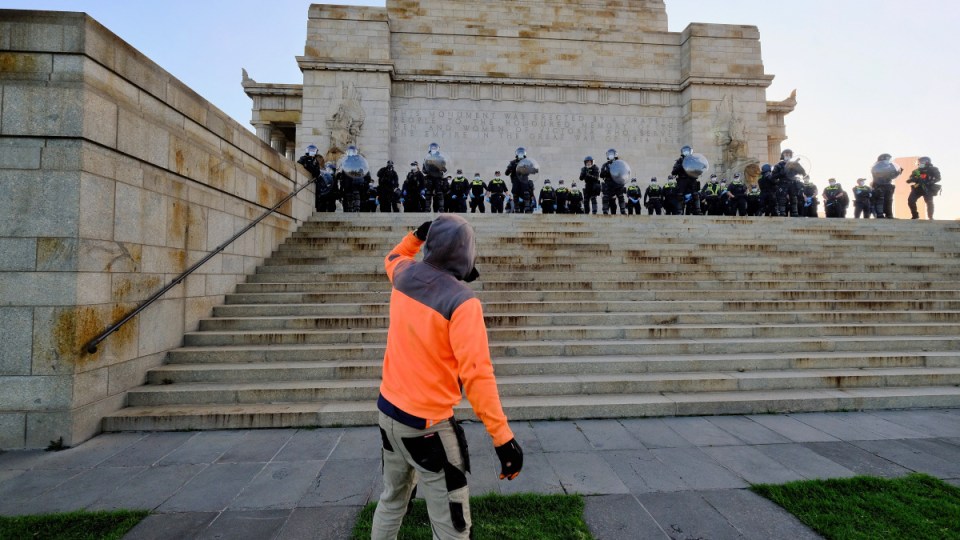 A Melbourne protester has tested positive and admitted to hospital. Photo: AAP

A demonstrator who attended the third day of recurring Melbourne protests is being treated for COVID-19 in hospital, with fellow demonstrators encouraged to get tested.

Victoria’s health department has confirmed the positive case is being cared for in hospital after attending Wednesday’s violent rally.

“We are urging protesters to get tested should they experience COVID-like symptoms, no matter how mild,” a spokesman said in a statement on Thursday afternoon.

The case will be included in Friday’s tally.

The COVID-positive person was among a mob of 400 to 600 who swarmed the Victorian capital on Wednesday, despite stay-at-home orders and repeated warnings from authorities.

Chanting “every day” from the Shrine of Remembrance, hundreds without masks, some still wearing high-visibility clothing, marched through the city to the war memorial.

The mob’s protest at the war memorial has attracted criticism from veterans and politicians.

Prime Minister Scott Morrison described demonstrators’ conduct as “disgraceful” after some urinated on walls and left the site strewn with rubbish.

The demonstrations initially began in opposition to mandatory COVID-19 vaccinations for the construction sector and the closure of building site tea rooms, but have since turned into wider unrest.

A fourth day of the planned protests has been a non-event with no major demonstrations in Melbourne so far on Thursday.

Some 92 people were arrested in the city, with police pouncing before protesters were able to gather in significant numbers.

It comes as media organisations were granted permission to fly over the Melbourne CBD after a ban was issued by the Civil Aviation and Safety Authority on Wednesday, at the request of Victoria Police.

After complaints, organisations were told news helicopters could fly with the approval of police air wing and on the condition that any vision was broadcast with a 60-minute delay.

Federal Court Justice Helen Rofe said there were serious questions to be determined at a trial next week.

Meanwhile, stranded Victorians fully vaccinated against COVID-19 will be allowed to return home from Greater Sydney within a week.

Premier Daniel Andrews said anyone in NSW who has had both doses and returned a negative coronavirus test within 72 hours of returning could apply to come back from September 30.

Victorians have been banned from coming home from NSW unless they had an exemption or another valid permit.

Several thousand are expected to return to the state, but must test negative 72 hours before departure, isolate at home for 14 days and get tested at the start and end of quarantine.

Authorised officers will do spot checks on returnees to ensure they abide by the rules.

Victoria recorded its highest-ever daily COVID-19 cases in the 24 hours to Thursday, with 766 new infections.

Four people died, including three people from the Hume area and one from Moreland, bringing the latest outbreak’s death toll to 20.

There are now 257 people in hospital with COVID-19, 60 of whom are in intensive care, including 41 on a ventilator.

More than three-quarters of Victorians aged over 16, or 75.2 per cent, have had at least one dose of a vaccine, with 45.6 per cent of those eligible now fully vaccinated.

Mr Andrews said the state was “currently rationing” Pfizer doses and there was not enough stock to bring the time between doses forward.

Melbourne protester being treated in hospital with COVID-19