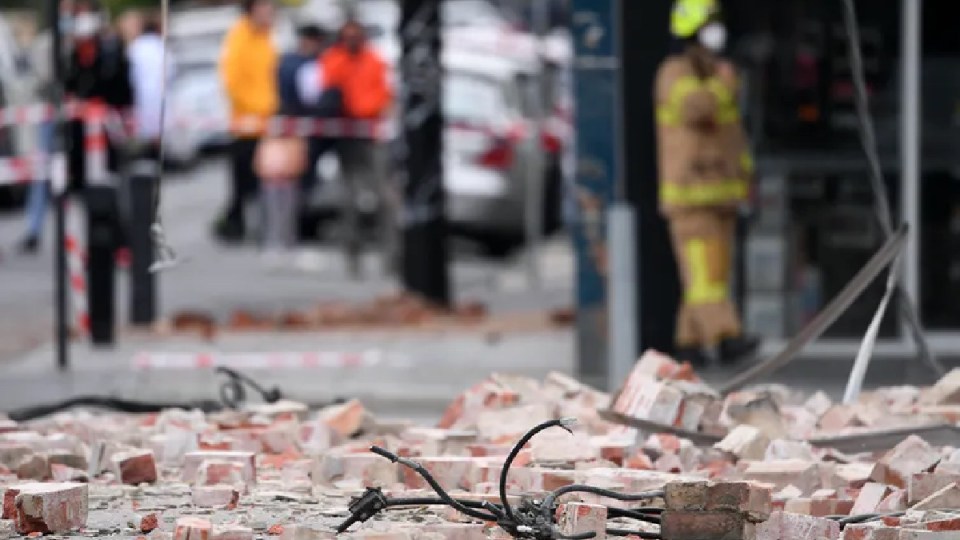 News of Melbourne’s earthquake today made my left leg hurt.

That’s the leg I nearly lost.

On February 22, 2011, there were nine of us on a red bus from Sumner to Canterbury University in Christchurch.

At 12.51, the unreinforced brick facade of 605 Colombo Street crushed our bus and four pedestrians. I felt brick after brick land on my left hip, and wondered how long I would last.

I was taken to hospital on the back of a stranger’s truck.

I broke more bones than the surgeons were willing to count, spent two months in hospital, and six months off work. More than a decade later, I feel the earthquake in every step.

During that earthquake, 16 people were killed just on that one block of Christchurch’s main street.

Melbourne and country Victoria are full of places just like it, with brick facades, parapets and gables.

It wasn’t the earthquake that killed everyone but me on that bus. It was the building, its lack of regulation, lack of structural support, and lack of a fence. It wasn’t just bad luck.

Earthquakes don’t kill people; buildings do. And those lovely decorative bits of buildings are the first to fall, even in relatively mild earthquakes like the ones Victoria gets from time to time.

After Christchurch, New Zealand learned our lesson and reformed our building legislation. Victoria can skip the truly painful part of the lesson – the deaths and injuries in the streets – and skip straight to the legislative reform.

The smart thing to do is create a separate category for non-structural unreinforced masonry: Parapets (the small decorative extension at the top of a wall), gables and chimneys. This is a good idea because:

Here, the Canterbury Earthquakes Royal Commission recommended it. And GNS Science calls parapets, gables and chimneys “dangerous”, even in cities with low earthquake risk, such as Auckland, Dunedin and Melbourne.

The building that collapsed on our bus was expected to fall. Everyone knows unreinforced bricks fall.

To me, the most predictable losses are the least acceptable. This is especially true when the methods of prevention are as known and straightforward as securing a parapet to the building’s structural core.

Fixing the parapets first has the highest ratio of safety gains to cost. There is no complicated inspection required. Parapets do not hold the building up.

Attaching them securely is less disruptive to the activity inside the building than replacing them entirely. That said, they could easily also be replaced with lighter, less deadly materials, as is often done in California.

By my calculations, saving my left leg cost taxpayers about half a million dollars.

Unreinforced masonry buildings pose a greater public danger to passersby than other types of quake-prone buildings that risk collapsing inwards. Placarding the buildings will do nothing for those in the street and on the footpath.

Allowing the parapets to persist unattached benefits only the owner.

The risks, meanwhile, are transferred to the public, and onto the public health system if an accident happens.

Fixing the most dangerous and least expensive bits first is also a cost-effective way to preserve heritage buildings.

Fixing the fally-offiest bits might render unnecessary the full building strengthening, and might prompt owners to spend the money now rather than in several decades’ time when the entire building needs repairs.

I am not saying all buildings in Victoria or Melbourne should be whizz-bang ‘earthquake-proof’ like those in Tokyo or San Francisco.

I am recommending cheap, effective fixes to the bits of buildings that are easiest to fix, and deadliest if you don’t.

I treasure my left leg, scars and all. But please, Australia, learn from your Kiwi cousins.

This article is adapted, with permission, from a 2017 article that originally appeared in the journal Earthquake Spectra.

Earthquakes don’t kill people; buildings do. And those lovely decorative bits are the first to fall