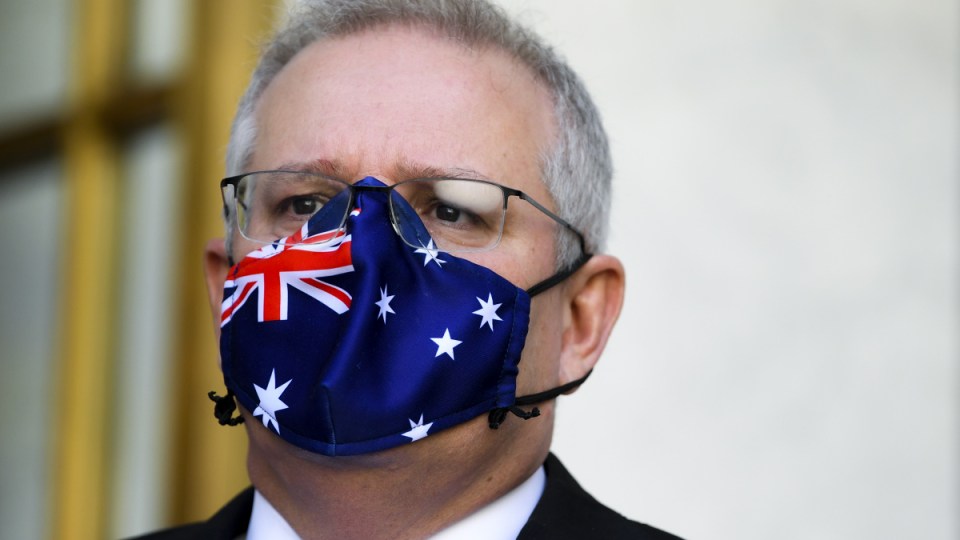 Scott Morrison, whose COVID face masks have the Australian flag emblazoned on them, likes to talk about “the Australian way” of doing things and Australian values.

But it is not “the Australian way” to secretly plan, over a very long time, to deceive a close friend of this country, and then to treat them in a most humiliating and disdainful manner.

That does not align with “Australian values” of honesty and fair dealing.

To add insult to injury, on Sunday Defence Minister Peter Dutton suggested the Australian government had been “upfront, open and honest” – the French could have read the signals of our discontent with their $90 billion submarines contract, including in Senate estimates hearings.

This latter reference brought to mind then Prime Minister Malcolm Turnbull suggesting to Barack Obama that if he’d kept up with the Northern Territory News he’d have known about Australia’s lease of the Port of Darwin to the Chinese.

As recently as the end of August, Dutton and Foreign Minister Marise Payne held the “Inaugural Australia-France 2+2 Ministerial Consultations” with their French counterparts. In the “bilateral co-operation” section of the communique came the sentence: “Ministers underlined the importance of the Future Submarine program”.

It’s telling that the unveiling of the new AUKUS agreement last week was surrounded by more showmanship than diplomacy.

The leaders of Australia, the US and Britain were successfully linked for a synchronised performance. But Morrison apparently did not manage to speak personally to French President Macron when a massive contract was being torn up.

AUKUS carries Morrison’s individual branding. It may be the most significant legacy of his prime ministership; however long he is in office, it will certainly be one of them.

It has all the Morrison hallmarks: His own work, conceived and executed in secrecy, kept to the smallest possible round of colleagues, details to be worked out much later, and little concern for the incidental fallout.

If, 30 years on, historians rate it as a stroke of strategic foresight that greatly protected Australia in a time of Chinese potential aggression, Morrison will deserve all the credit.

He says he’s been working for 18 months on this – the mustering of a new Anglosphere in our region – and he has managed to pull it off with Joe Biden and Boris Johnson, who both had their own reasons for being receptive.

On the other hand, if after 30 years, AUKUS is judged in the rear vision mirror to have escalated tensions with China to a greater degree than it protected us from Chinese aggression, history’s judgment will be different.

Even as we’re consumed by the short term, it is always worth a look at the long view. Especially when Afghanistan is fresh in our minds – a commitment that was necessary initially, but ended in a fiasco that has restored the Taliban.

Morrison’s planned nuclear-powered subs come without any estimated cost (except they’ll be more expensive than the French ones); or precise timetable (except they won’t be available for a couple of decades); or decision about which boat will be chosen (except it will be American or British), or firm indication of how much building will be done in Australia (except that it won’t be all of it and possibly only a modest amount).

If any of these aspects returns to bite, blame will (or should) rest on Morrison’s head, whether he’s around or not.

Then there’s the French relationship to manage. How long their fury will last is anybody’s guess. But given their interests in the region, it is no small thing to deliver this rebuff in what can only be seen as a crass manner.

Marise Payne may not be of great use in repairing the tear in the relationship. Her diplomatic credibility is one of the immediate casualties of the affair, especially after the recent ministerial talks.

One can only imagine how the feisty Julie Bishop would have reacted to being left so compromised.

With Australia’s ambition for a free trade agreement with the European Union in mind, Trade Minister Dan Tehan, flak jacket packed, is off to Paris next week.

Also important is the message that’s been sent to some key regional countries. Indonesia and Malaysia have expressed concerns. The risk is Australia could be seen as an unexpectedly capricious player in the way it operates.

AUKUS is a mark of the supremacy of the hawks in Canberra. Although Morrison said he started planning it with former defence minister Linda Reynolds, it is a precise fit for current minister Dutton.

In thinking about defence strategy, governments of both complexions have circled around questions of long-range capability, of which nuclear-powered submarines are part.

But it was not until Morrison, in the lead up to the 2020 defence strategic update, started to push Reynolds and the defence establishment to contemplate the acquisition – and potential use – of such weaponry that the real momentum came.

In Dutton, Morrison has a Defence Minister who not only shares his instinct on this, but has a full-time focus on it.

Some months ago the secretary of the Home Affairs department, Mike Pezzullo, himself a hawk, wrote of hearing the “drums of war”.

It was obvious well before that Australia was preparing to refurbish and expand its own drum set in the face of an assertive China already targeting Australia economically.

Dutton and others have increasingly dropped the government’s earlier attempt to avoid naming China as the potential enemy, even if we haven’t quite got back to the red arrows from the north of those 1960s depictions.

One problem with the subs deal is that, given the pace at which things move, a China-US military blow up over Taiwan (if it comes to that) could be done and dusted, with God knows what consequences, by the time the boats are in the water.

No wonder the talk now is of leasing a sub or two to fill in the gap, given the inadequacy of the Collins-class submarines we now operate.

It should be noted, incidentally, that some commentators expert in these things say the French nuclear-powered subs (as opposed to the conventionally-powered ones we’re ditching) would be more suitable to our needs than the US or UK boats.

The government says the problem is they would need their nuclear power refuelled every seven to 10 years offshore (because Australia wouldn’t have the nuclear facility), while US and UK subs are powered for their lifetimes.

That would not seem a great difficulty, but obviously reworking the French deal would not have delivered the big technological and other advantages of going the full monty with the AUKUS partners.

AUKUS will bring Australia a whole lot of other US weaponry and more boots on Australian ground.

This takes us to the future of the Port of Darwin.

Just as the Coalition has botched for years its attempts to get new submarines, so the Northern Territory awarding a Chinese company the lease of the Port of Darwin was a massive snafu.

It’s no good the federal Coalition saying it was all the NT government’s fault. The Defence department knew about it and wasn’t worried.

Now the Morrison government has a review of the lease in train. In light of AUKUS, with enhanced military assets in the north and our assessment of the Chinese, it would seem a logical absurdity to let the lease stand. And yet quashing it would be another demonstration of Australia’s unreliability on done deals. It’s a mess.

AUKUS will no doubt have a good many more consequences.

One (not formally or totally linked of course) is expected to be a more ambitious climate policy from Australia, which Joe Biden has been urging on the Morrison government for the Glasgow climate conference.

Morrison in coming weeks will want to deliver to Biden (and Johnson), although we don’t know the extent of that delivery, or whether Barnaby Joyce will find himself struggling with any collateral fallout among his own people.

View From The Hill: For Morrison, AUKUS is all about the deal, never mind the niceties