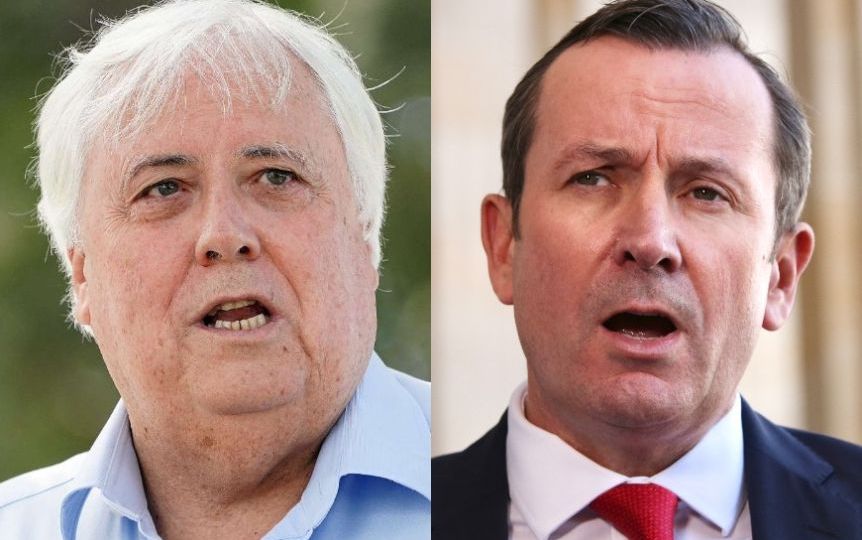 Clive Palmer has been urged to drop his case against WA. Photo: AAP

Western Australian Premier Mark McGowan has urged Clive Palmer to discontinue legal action against himself and the state, as the costs continue to mount.

A defamation case brought by Mr Palmer came before the Federal Court again on Monday in relation to the discovery of certain documents.

But immediately prior to the hearing, the premier described a series of actions brought by the mining magnate as a “misdirection of resources”.

He said defending the matters was expensive but something he and the state were forced to do.

“I’d advise him or wish he would stop and that way we could all get back to doing more important things,” Mr McGowan said.

State budget papers released earlier this month put the cost of defending actions brought by Mr Palmer at $1.47 million so far, with an expectation of spending a further $3.25 million over the next two years.

The premier said on Monday he would not be surprised if the costs were to go even higher.

“But every single one of these cases is not our doing. It’s Mr Palmer pursuing legal action against us which we then have to defend,” he said.

In court on Monday Justice Michael Lee ordered the state government produce any relevant documents it might have in respect to the defamation case.

The court also heard that a date for mediation in the matter was still to be set, ahead of a scheduled trial starting in late January next year.

Mediation was previously delayed because of ongoing COVID-19 restrictions.

Justice Lee said he would prefer any witnesses at the trial to appear in person but was told that the border closure between WA and NSW was still expected to be in place until possibly March, making it difficult for the premier to attend without being forced to quarantine on his return to Perth.

Mr Palmer last year filed a lawsuit against the premier, claiming his public comments, including labelling him the “enemy of West Australia”, had damaged his reputation.

Mr McGowan lodged his own defamation counter-claim a month later.

A separate High Court matter between Mr Palmer and the state of Western Australia is awaiting judgment.

It relates to extraordinary legislation passed in WA’s parliament in August to amend a 2002 state agreement with Mr Palmer’s Mineralogy company and terminate arbitration between the two parties.

The legislation is designed to block Mr Palmer from claiming up to $30 billion in damages from the state.

The defamation case will return to court in November for another case management hearing.

‘More relevant than ever’: Why The Wiggles make cover of iconic pop culture magazine Rolling Stone
‘Nothing illegal’: Barnaby Joyce says he wants Christian Porter back as minister
Today's Stories