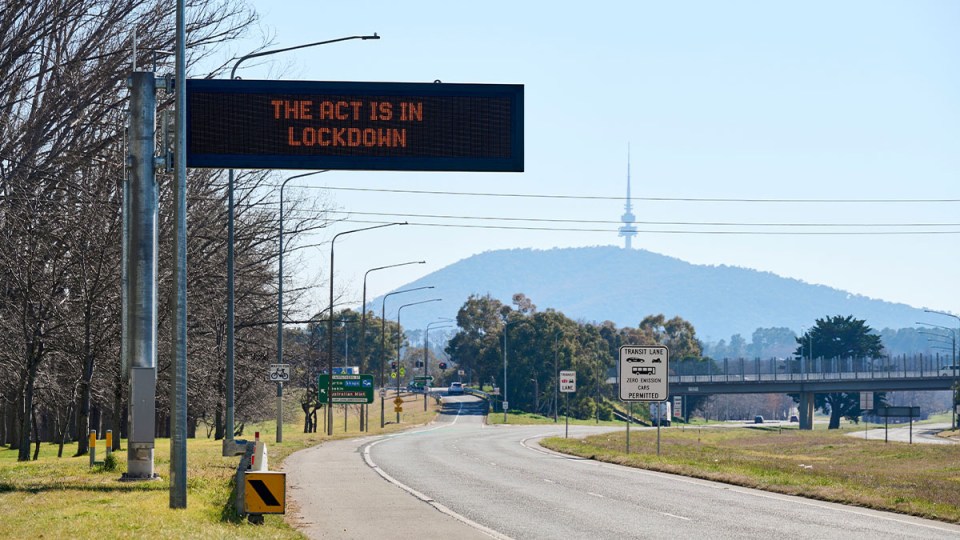 The ACT is expected to remain in lockdown for at least another month. Photo: Getty

All of Monday’s cases were linked, but at least four were in the community for some of the time while infectious.

ACT Chief Minister Andrew Barr was pleased with the number.

But he warned it was too early to say if it was a trend, pointing to the 30 local infections reported on Friday.

While federal advice indicates the ACT’s supply will not reduce in September and October, Mr Barr said it would also not rise as projected over that time and into November.

“We will continue to work with the Commonwealth on this point. We are optimistic that the issue can be positively resolved,” he said in Canberra.

“During their outbreaks, NSW and Victoria both received increased supplies of vaccines. It is our view that the ACT should not be treated any differently.

“I don’t think any other jurisdiction in the midst of an outbreak has had its forward projections reduced.”

The ACT is leading the country on vaccination rates, double-dosing 55 per cent of its population aged 12 and older.

Mr Barr is unhappy extra Pfizer supplies are all being directed to GPs, and Moderna doses to pharmacies, instead of the ACT’s mass vaccination hubs.

While the territory has just opened bookings at these clinics for children between 12 and 15, families were warned they might have to wait longer.

Mr Barr thought the ACT government could deliver doses more efficiently through its hubs than via GPs and pharmacies.

He hoped every eligible resident who wanted a jab could get at least one by mid-October, when the lockdown is scheduled to end.

Mr Barr also wants to wait until the national average for full vaccinations hits 80 per cent before giving the green light to major changes.

“Why does it matter for the ACT? Well everyone is presuming that there will be much more freedom of movement between the ACT, NSW and Victoria as we all move towards those thresholds,” he said.

“It does matter what the vaccination rate is in those other jurisdictions.”

But he also stressed the difference between 70 and 80 per cent would likely amount to days or, perhaps, a week.

There are 224 active cases in the territory, with five people in hospital including two in intensive care. One of these patients is on a ventilator.

The number of local cases that can be linked and how many are in the community while infectious will be crucial in determining whether the lockdown will end on October 15.

ACT’s swipe over Pfizer as it reports seven more cases