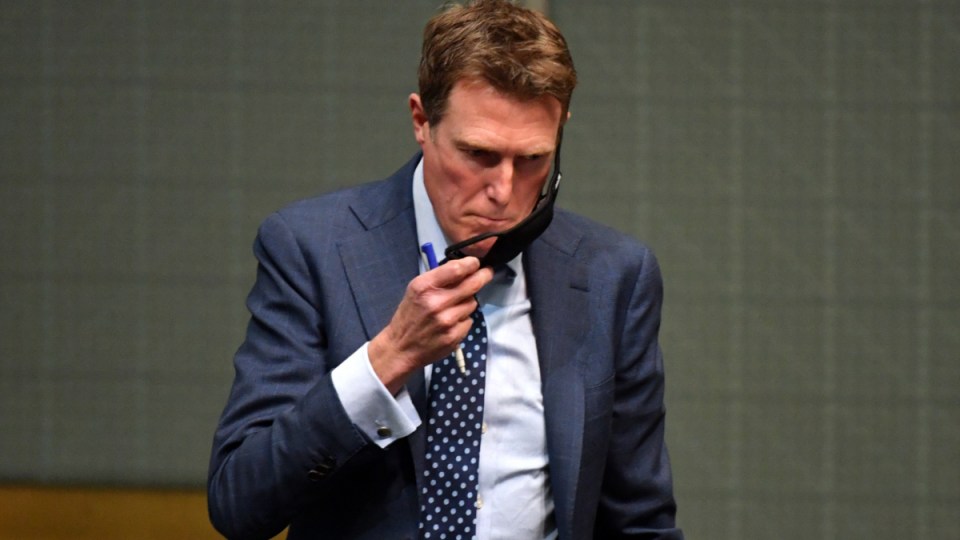 Christian Porter has resigned from the federal cabinet over his “blind trust” donation scandal, but has given no indication he will return the money or ever disclose who gave it to him.

The former minister defended his decision not to ask where the cash came from, claiming that doing so would expose his donors to “the social media mob” and that he was “not entitled” to know the source of the money.

But Labor is still demanding to know where the money came from and how much Mr Porter received, claiming the situation was “absurd”.

“They contributed to a trust on the basis of confidentiality and a belief that their contribution would remain confidential within the rules of disclosure,” said Mr Porter, in his first comments on the scandal that has claimed his position as Industry Minister.

“I am not prepared to seek to break the confidentiality of those people who contributed to my legal fees.”

Mr Porter resigned from the ministry on Sunday, following days of mounting criticism over his decision to accept funds from a ‘blind trust’ to partially pay for the legal fees stemming from a defamation case against the ABC.

Mr Porter’s legal case related to reports that he had been accused of raping a woman in the 1980s. It is an accusation he strongly denies.

It is unclear how much money he accepted from the blind trust, but his legal fees have been reported to be as high as $1 million.

He said the ministerial code of conduct compelled ministers to “conclusively rule out a perceived conflict”, which Mr Porter was unable to do.

“It is a blind trust. He cannot disclose to me who those donors are,” Mr Morrison said.

“Our discussions today were about upholding the standards. We believe they are incredibly important, and it is not just about actual conflicts, it’s about the standards for ministers to have an obligation to avoid any perception of conflicts of interest that is ultimately what has led the minister to make that decision this afternoon.”

Mr Morrison said he had not received advice from his department on whether Mr Porter’s case breached the ministerial standards. However, the PM said Mr Porter’s decision to resign was “appropriate”, and that he now considered the matter “concluded”.

Mr Porter claimed he could have no knowledge of the donors to the entity behind the blind trust, known as the Legal Services Trust.

But in a 1600-word statement, he said he had been in contact with the trustee, who assured him none of the donors were “lobbyists or prohibited foreign entities”.

Mr Porter claimed he had “no right of access to the funding or conduct of the trust”, and did not plan on asking for more information on who had contributed to the trust.

He cited potential social media abuse, of the type which he experienced after the ABC reporting, against the donors as one of his reasons.

“No doubt the desire of some, possibly many, of those contributors to remain anonymous was driven by a natural desire to avoid the inevitable fact that for supporting me, the trial by mob would inevitably turn on them if they were identified,” Mr Porter claimed.

He made no mention in his three-page statement of any consideration to return the money he received.

Despite his resignation, Mr Porter also said he believed he had complied with the requirements under the Members’ Register of Interests.

“However, after discussing the matter with the Prime Minister I accept that any uncertainty on this point provides a very unhelpful distraction for the government in its work,” Mr Porter said.

Labor leader Anthony Albanese and shadow attorney-general Mark Dreyfus said Mr Porter should still be compelled to reveal how much money he received, and who it came from.

“It’s absurd for Mr Morrison to claim that Mr Porter has upheld the standards – he has breached the Ministerial Standards. As of now, Mr Porter is still in receipt of up to $1 million in secret donations, and Mr Morrison is apparently comfortable with this,” Mr Dreyfus said.

“But Mr Porter’s resignation from cabinet does not draw a line under this matter. Mr Morrison now needs to come clean about how much he knew about this secret fund, and demand Mr Porter either come clean about the source of these donations or give the money back.”

Mr Albanese said Mr Porter needed to give more information on where the money came from, arguing that his resignation from the ministry made no difference.

“Members of Parliament, as well as ministers, can’t just accept money from anonymous donors for a private legal matter,” he said.

The New Daily understands Labor and other federal politicians are considering options to further dispute Mr Porter’s disclosure, including a referral to Parliament’s Standing Committee of Privileges and Members’ Interests, which can hear “complaints about registering or declaring interests”.

Independent senator Rex Patrick tweeted that Mr Porter’s resignation “does nothing to discharge his duty as an MP to place on the public record interests which may conflict, or may be seen to conflict, with his public duty as an MP”.

Mr Porter said he planned to contest the next election as Member for Pearce, and had “no intention of standing aside from my responsibilities to the people of Pearce”.