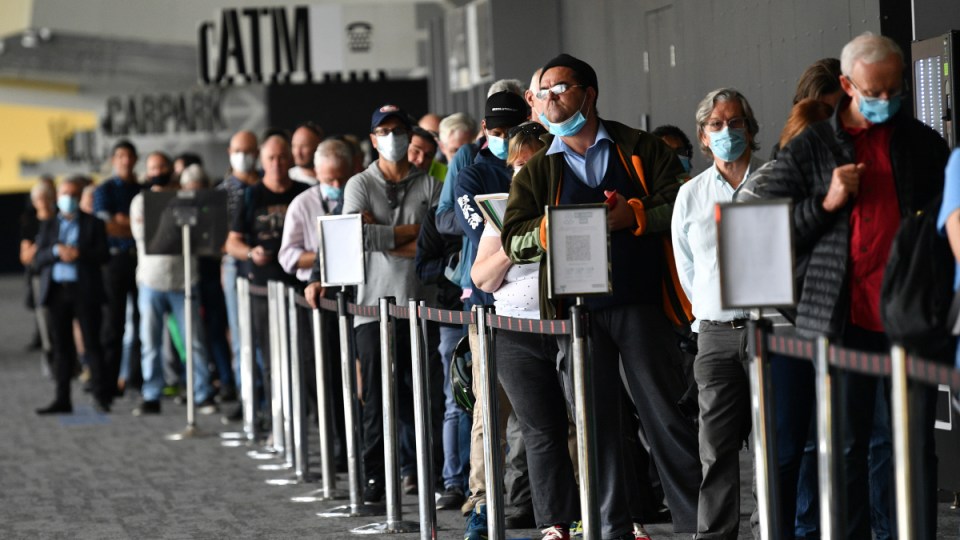 Eligibility for the Pfizer vaccine opened up to more age groups on Wednesday. Photo: AAP

Victoria has confirmed 45 more local COVID-19 cases, and the state government’s vaccination website has crashed as thousands of young people try to secure a booking.

The source of the remaining nine infections are under investigation.

Twenty-eight cases were not isolating and infectious in the community.

“In many ways, this particular outbreak continues to be an outbreak of young people,” Mr Foley said.

Wednesday’s update came as as Pfizer eligibility was expanded to people aged 16 to 39 across Victoria’s 55 vaccination hubs.

More than 830,000 vaccination bookings for the next four weeks opened from 7am on Wednesday, including 450,000 first-dose Pfizer appointments.

On Tuesday, Premier Daniel Andrews urged Victorians to be patient, warning there weren’t enough vaccines for “every single person who will want to come forward and make a booking”.

Within minutes of bookings opening, the website appeared to buckle due to high traffic.

Many young people reported receiving a “500 internal server error” after waiting for up to an hour in the queue to schedule an appointment.

Others made it through the queue, only to be told that they were ineligible for the Pfizer vaccine.

Those who phoned the state’s coronavirus hotline were also unable to schedule an appointment.

“The Andrews Labor government has had months to get prepared and yet the confusion continues and the system crashes again,” opposition health spokeswoman Georgie Crozier said.

“Getting vaccinated is our way out of lockdown, Victorians should have the confidence that they can book their appointment, get the jab and help our state back open.”

Those aged 18-39 who have already made a first dose AstraZeneca appointment will have the option to get Pfizer instead. Anyone aged 16-17 will get the Pfizer.

Those aged 60 and over will continue to receive AstraZeneca.

The expansion of the state’s vaccine rollout is possible because of an additional 175,000 Pfizer doses from the Commonwealth government, imported from Poland.

Mr Andrews said it was still too soon to say if the lockdown would be lifted as planned on September 2.

‘I was very respectful’: Jason Momoa apologises after taking photos in the Sistine Chapel
Hospitals can cope with COVID: Josh Frydenberg
Today's Stories