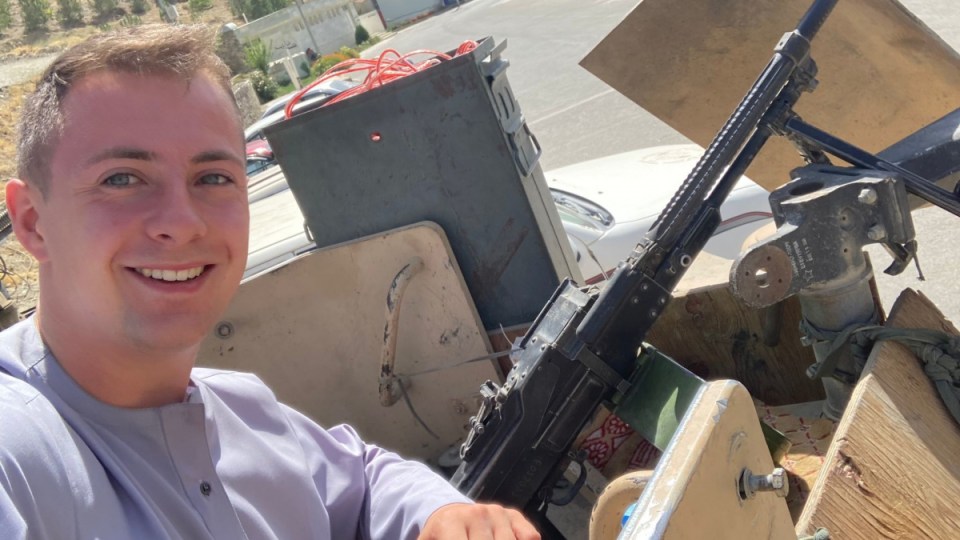 The British tourist went to Afghanistan as the Taliban was advancing. Photo:AAP

A British student who went to Afghanistan on holiday has been evacuated to Dubai after being forced into hiding by the advance of the Taliban.

Miles Routledge, 21, of Loughborough University in Leicestershire, received widespread attention and criticism on social media after he travelled to the country on a planned trip last week despite the extremist group’s gains in the nation.

Mr Routledge shared updates about his experiences over recent days as the Taliban seized the country, including claims he encountered the group’s members, saw dead bodies in the street and shielded from gunfire in a NATO-controlled safe house.

He told followers on Tuesday he was on a list for evacuation from Kabul, and hours later posted a video of himself and dozens of others landing in what he described as a British Army plane.

“The happy ending: landed in Dubai thanks to the brilliant people at the British army. All safe!” he wrote.

A Ministry of Defence spokesman confirmed UK military flights had been carried out from Kabul to Dubai around that time, but was not able to verify whether the footage was filmed on board one of them.

Mr Routledge told the PA news agency on Monday he and other civilians, including some other British citizens, had been given refuge in what he described as a NATO-controlled building in Kabul.

A spokesman for NATO was unable to confirm his claim.

It came amid chaotic scenes at the city’s nearby airport where hundreds of people attempted to board a US Air Force plane, with several plunging to their death as it took off.

Gunshots were also fired at the scene and at least seven people died as the chaos unfolded, US officials said.

In audio sent by Mr Routledge to PA on Monday afternoon, rapid gunshots like machine gun fire could be heard in the background.

“It’s constant at some points. It’s coming from the airport,” Mr Routledge said.

“Right now it’s very close, no more than 100 metres from our compound.”

Despite the violence, Mr Routledge said he felt safe in the building.

“Ngl (not going to lie), you get used to it, it’s like this at night,” he said in a WhatsApp message.

“I’m just ready to run with a backpack at a moment’s notice.

“These NATO guys are amazing, they really do make you feel safe and looked after.

“We’ve got a pool, canteen, gym, clothes machine and even a shop.

“It’s comfortable when we can use that stuff.”

Mr Routledge, a physics student who also works in wealth management, went viral online after posting messages on Facebook, streaming site Twitch and the 4chan discussion board about his trip to the country.

He arrived in Kabul this week as an alternative to a beach holiday, having looked up the most dangerous places to visit in the world and picked it off a list.

Mr Routledge has previously posted photos from a leisure visit to Chernobyl.

Earlier in his visit to Afghanistan he posed for a photo with what he believed was a military machine gun after speaking to soldiers on a trip outside Kabul.

Shortly afterwards, Mr Routledge said he had seen dead bodies in the streets around the capital as violence escalated.

In a message to followers, he admitted he had “bitten off more than I can chew”, but had known the risks when he travelled.