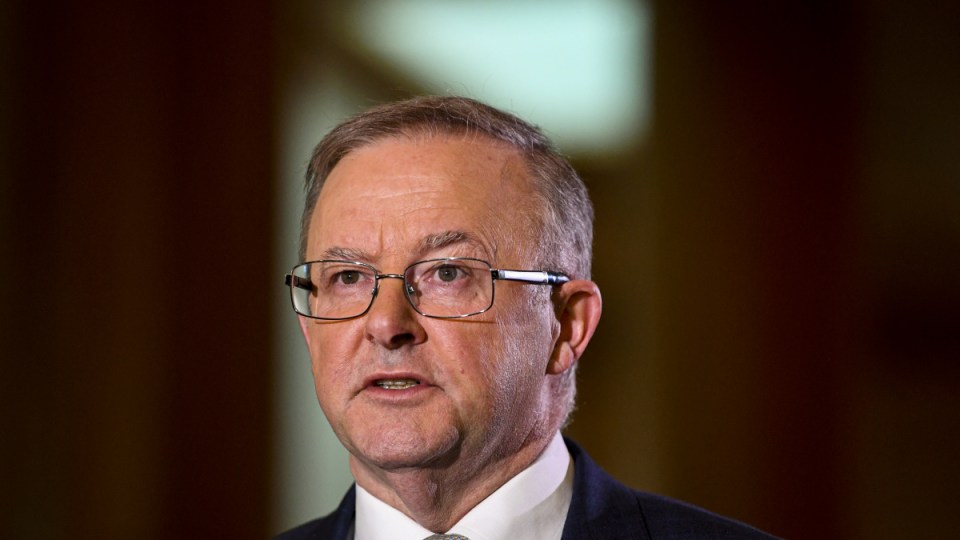 The Opposition also dumped previous commitments for overhauling negative gearing, part of a wide-scale series of policy announcements on the eve of Parliament returning next week.

“Labor in government will uphold the legislative changes to personal income taxes,” Mr Albanese said in Brisbane on Monday.

It was a stark contrast to reflections in the past year from both men on the ‘stage three’ tax cuts, which will cost more than $130 billion from July 2024.

These changes, proposed and legislated by the Coalition government, would delete the 37 per cent tax bracket and see all earners between $45,000 and $200,000 pay a flat 30 per cent.

Labor had backed stages one and two, for low- and middle-income earners, but opposed stage three in Parliament.

He also said it “didn’t make a lot of sense for the government” to “bake in” the spending years in advance.

Greens leader Adam Bandt called Monday’s decision a “betrayal” and “the sell-out of the century”, claiming it would “turbocharge economic inequality”.

Finance Minister Simon Birmingham, who badgered Labor to announce its position on the tax cuts, slammed the decision as “the most agonising, most half-hearted concession in Australian politics ever”.

He claimed a Labor government would backflip on that pledge.

“They’ve done it after months, years of bickering and arguing inside Labor. We know they’re divided. We know that they don’t believe in it,” Senator Birmingham said.

“The truth is they won’t tear those policies up. They’ll just put them in the bottom drawer to dust them off after the election if they win.”

Despite the criticism the tax decision received, the move has been painted as something of a “deck-clearing” before the next election, due by May.

‘Prepared for an election’

By prising off several Bill Shorten-era policy barnacles that cost Labor the 2019 election, and chopping off a future line of attack by not opposing the tax cuts, Mr Albanese may be looking to swallow a bitter pill now rather than closer to the poll.

“We certainly are prepared for an election whenever it’s called. We have given appropriate consideration to this,” the Opposition Leader said, when asked if the changes were an ‘election platform’.

“Parliament is due to come back next week. We made a decision that we would clarify our position around about now. And that is what we are doing.”

At numerous points during the press conference, both Mr Albanese and Mr Chalmers stressed they didn’t want to “relitigate” or “reprosecute” the last election, to explain the dumping of Mr Shorten’s divisive cuts to negative gearing concessions.

Those changes had opened up Labor to claims of a “housing tax” attack line from the government, an edge the opposition was looking to negate.

“You have to respect the view of the Australian people. And we weren’t successful at the last election,” Mr Albanese said bluntly.

But announcing the tax cut decision alongside negative gearing changes, plus extra policies around a national integrity commission and a Senate bill to crackdown on “rorts”, was something of a cushion to insulate Labor against the policy U-turn it had just made.

On social media, for instance, Mr Albanese’s pages highlighted the anti-corruption commission announcement – not the tax or negative gearing backflip.

Monday was one of Mr Albanese’s most substantial policy announcements since becoming leader.

He has preferred to announce a small number of weighty and high-value policies, rather than the ‘100 positive policies’ approach of his predecessor.

Mr Albanese and Mr Chalmers detailed their reasons for the tax decision as about “providing certainty and clarity to Australian working families” after the pandemic.

But it also has the obvious benefit of blunting what would’ve been an inevitable line of attack from the government; that in reversing the tax cuts, Labor would have been painted as the party of “higher taxes” or “taxing aspiration”.

Senator Birmingham already tried to pick that fight with Labor in budget week.

Little was explained about why Labor decided to support the tax cuts they called the “least responsible”.

Of the remaining nine paragraphs, seven were dedicated to hammering the government’s economic record, including highlighting the national debt – on track for $1 trillion – and lagging wages growth.

In other words, Labor’s announcement about a significant policy shift spent more time blasting the Coalition than explaining the reasons for the $130 billion unity ticket it had put itself on with them.

“This election won’t be about differences on these legislated tax cuts,” Mr Chalmers claimed, downplaying the announcement.

“The next election will be about the cost of the economy of Scott Morrison’s diabolical failures on vaccines and quarantine and JobKeeper.”

Of course, even after they signed on to the government’s tax policy, Senator Birmingham still rounded on the opposition.

“The Labor Party has in their DNA a desire to always seize higher taxes, push them up higher, and certainly can’t be trusted with promises in relation to lower taxes,” he claimed.