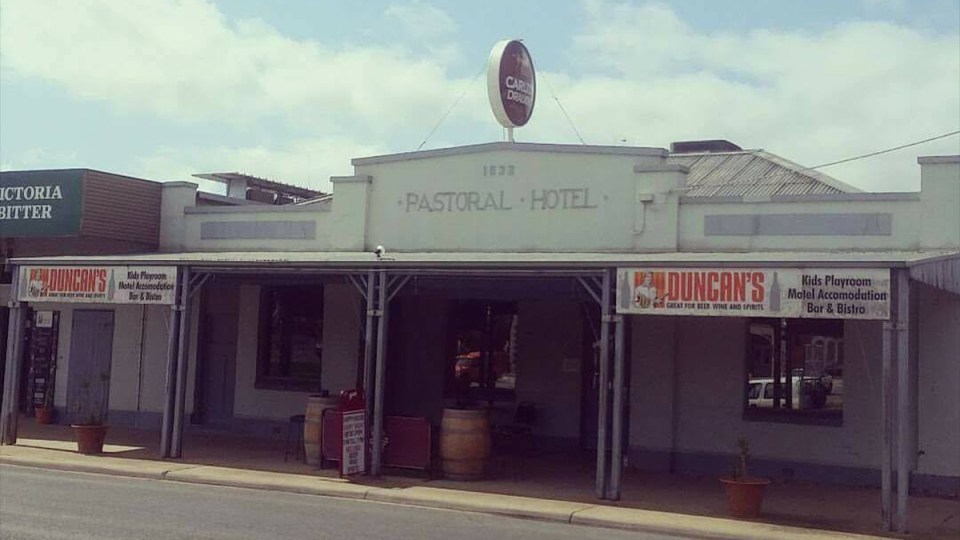 The owner of a pub in regional Victoria has been fined for opening during lockdown. Photo: Facebook

A pub owner in regional Victoria has had a run in with the law for pouring pints and serving parmas despite public health measures prohibiting it.

Trevor Andrews of the Pastoral Hotel Echuca has been opening to patrons for three days, serving meals and drinks in defiance of the state’s fifth lockdown.

“He’s copped already two lots of fines totalling nearly $22,000 for himself. He’s still got other charges now pending before the court for that third breach. Common sense has not prevailed.”

Under current lockdown orders in Victoria, hospitality venues can open for takeaway only.

But Mr Andrews told the ABC on Tuesday he felt the rules were unfair, with large retailers allowed to remain open.

“It’s no different to people going into supermarkets, bottle shops … those places might have 100 people in an hour,” Mr Andrews said.

“But you may not even get 100 people in some of these small businesses in a week.

“We haven’t had one case in Echuca.”

The publican also spoke to Nine News, revealing the police had been by to issue him with a warning.

“Police came in yesterday and gave me a notice saying these people aren’t meant to be here,” he said.

Mr Andrews said once he let his clientele know the doors would be open, customers had been turning up at their own risk.

“We’re COVID-safe, and we’ve been that way since day one … we should be allowed to open,” he said.

Mr Andrews took his frustration to the internet, posting a Facebook update on Saturday advertising his stance on the matter.

“Due to the fact that you are allowed to shop at all of the major retail stores who are allowed to operate… while other small business owners are going to the wall, if they haven’t already, I have made the decision that I am opening my hotel,” he wrote.

Mr Andrews said the financial setback of coronavirus lockdowns in his regional town had been crippling to his business, leaving him with no other option.

Meanwhile, a probe into the NSW removalists who sparked Victoria’s Delta coronavirus outbreak – and fifth lockdown – was set to be handed to police on Friday.

Victorian Premier Daniel Andrews cleared up any confusion about who will lead the investigation, confirming it would the Department of Health was close to finalising their own investigation and would be forwarding it on to police.

“If it is not with police, it is literally on the way to them and they will do as they see fit,” Premier Andrews said.