Subscribe direct to our news source →
Watch: Everything you need to know about face masks.

NSW is bracing for more bad COVID news, with its Premier warning Thursday’s record infection numbers would not be the last in this outbreak and an end to Sydney’s four-week lockdown seems a distant hope.

New exposure sites were released on Thursday night, including places where it appeared staff worked numerous shifts while infectious.

They included a Campsie supermarket listed for 33 hours over three days and a Marrickville factory for long spells over four days.

Alerts were also issued for Byron Bay, Wategos, Suffolk Park, Sunrise and Broken Head in northern NSW after fragments of the coronavirus were detected at the sewage treatment plant that serves the area.

“There are no known cases in this area, which is of great concern”, NSW Health said, urging people to be vigilant for virus symptoms and, if they appear, to get tested and isolate until they get a negative test result.

The health department also quashed “false reports” circulating on social media that supermarkets would be closed for four days next week, saying that was not the case.

The lockdown now extends beyond Sydney and surrounds to Orange and other areas in NSW’s central west. Stay-at-home orders there will last at least a week.

NSW has had 1648 local cases since its current outbreak began on June 16 with an unvaccinated limo driver.

Of the 124 new positive cases announced on Thursday – a daily high for this outbreak – more than half were in the community while infectious.

As infection numbers have risen in the past two days, Ms Berejiklian has protested that the impact of heightened restrictions announced last Saturday would not be seen until at least this weekend.

She has repeatedly refused to be drawn on what her government will do if even shutting construction and the other harsh new measures fail to push case down numbers.

“I never want to deal in hypotheticals,” Ms Berejiklian said on Thursday.

She said NSW had to accept that the virus numbers might keep going up, but added they would have ballooned to the thousands without the extra restrictions.

“We anticipate case numbers will continue to go up before they start coming down and we need to brace ourselves for that,” she said on Thursday.

Forty-one workers at a Melbourne hospital have been temporarily stood down after a fellow staffer worked a shift while infectious with COVID-19.

The employee of Casey Hospital, a 229-bed facility in the city’s outer south-east, returned a positive test on Tuesday. 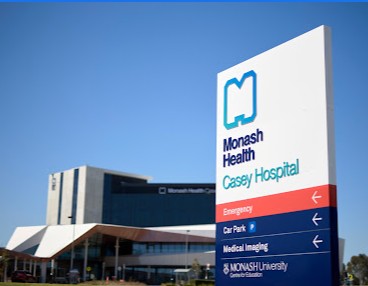 Monash Health, which manages the hospital, confirmed the case on Thursday night.

The staffer worked one shift during their infectious period, forcing 41 hospital employees to be furloughed as they await test results.

The worker wore PPE during the shift, has no front-facing role, and is not thought to have had any interaction with patients.

Meanwhile, a popular Melbourne market will reopen on Friday after a COVID-positive shopper forced it to shut.

One of the 26 local cases reported in Victoria on Thursday spent almost 90 minutes at Prahran Market and Market Lane Coffee last Saturday.

The entire market was listed as a tier-one site exposure site, with about 900 people who visited during the time period required to get tested and self-isolate for 14 days.

The shopper’s case is linked to the AAMI Park outbreak, with authorities believing they picked up the virus while queuing outside Gate 7 before the Australia-France rugby union Test match on July 13.

It was one of only two new cases to have spent any time out in the community during their infectious period, a point of pride for health officials.

Acting chief health officer Ben Cowie said it was too early to say whether Victoria’s lockdown would end as planned at 11.59pm on July 27, but he was confident authorities have a handle on the outbreak.

“I’m feeling like we’re certainly winning the race, it’s a question of just keeping going so hard to the finish line,” he said.

The number of sites of concern is heading towards 100 with the Seppeltsfield Winery in the Barossa Valley and a TAFE college in Adelaide among the latest to join the list.

The growing number of locations has meant thousands of people are in home quarantine with requirements to have three virus tests as the state heads into the third full day of its week-long lockdown.

The so-called Modbury cluster stands at 14 confirmed infections after two more on Thursday.

But Premier Steven Marshall said he remained grateful the state had moved into lockdown on Tuesday as waiting any longer could have been catastrophic.

Thursday’s cases were a brother and sister in their 20s who went to the Tenafeate Creek winery, north of Adelaide, at the weekend.

Seven cases, including a child under five, are linked to the venue, which is considered one of two super-spreader events.

SA’s second super-spreader site is The Greek restaurant in Adelaide’s CBD, where several infected people dined last Saturday and one staff member has since tested positive.

Chief public health officer Nicola Spurrier said 91 people were linked to The Greek and 125 to the winery during the periods of concern. All had been moved into hotel quarantine.

The growing cluster has prompted a huge increase in testing with 17,592 swabs taken on Wednesday, a daily record for SA.

SA’s cluster is linked to an 81-year-old man who recently arrived in Australia from Argentina and was quarantined in Sydney before travelling to Adelaide, where he tested positive.

Genomic testing has confirmed the man became infected while in Sydney.

The pandemic has taken its toll on Australian nurses, and now hospitals are scrambling for staff
‘Natural experiment’: How SA, Victoria and NSW COVID-19 lockdowns compare
Today's Stories