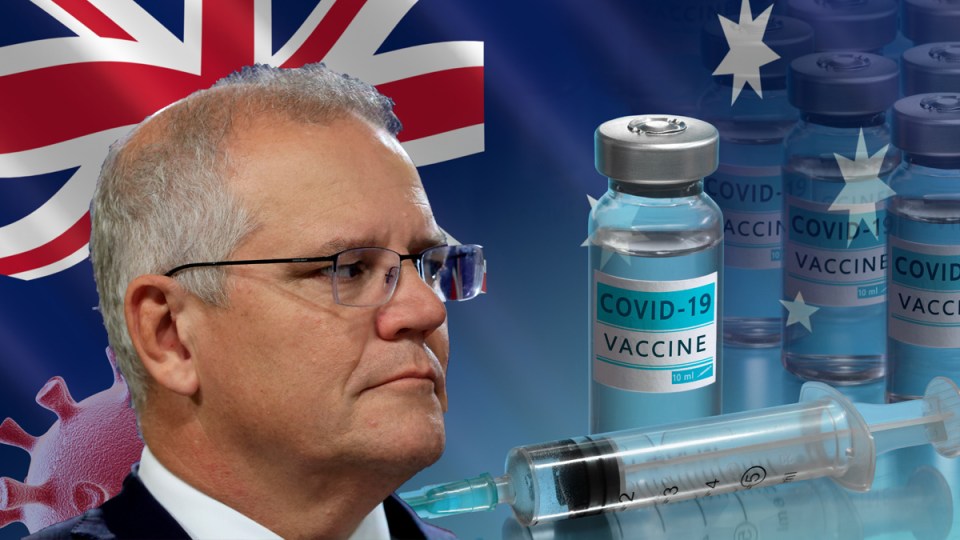 Scott Morrison says the slow vaccine rollout is not to blame for lockdowns. Photo: Getty/TND

Scott Morrison insists he shares the frustrations of more than half the Australian population in lockdown.

But the Prime Minister continues to deny the bungled vaccine rollout is responsible for the widespread restrictions.

Just 14 per cent of the population is fully vaccinated, with Australia lagging behind most of the world.

But Mr Morrison said countries with much higher vaccination rates were also going back into lockdown as the globe grappled with contagious strains of coronavirus.

He also singled out “gobsmacking” rates of coronavirus in Britain, where deaths are rising despite widespread vaccinations.

“I understand there is great frustration. Believe me, I feel the same frustration,” he told 5AA radio in Adelaide on Wednesday.

“This latest Delta variant has thrown a completely new curve ball on this issue, which every single country in the world is wrestling with.”

Mr Morrison insisted total urgency was being applied to the vaccine rollout, despite earlier arguing the national program was “not a race”.

He again blamed delays on multiple updates to expert advice on the AstraZeneca jab, describing the ATAGI recommendations as “a big problem”.

But he said the rollout was ramping up significantly, with more supplies and vaccination centres being added.

“We’ve had our problems but we’re getting over them,” he said.

Coronavirus outbreaks have plunged more than half of Australia into lockdown, sparking calls for more federal support.

South Australia joined Victoria and greater Sydney and surrounds in lockdown on Tuesday night. Orange, Blayney and Cabonne local government areas in central-west NSW are also embarking on a seven-day lockdown after a COVID-19 positive delivery driver visited the area and infected another person.

It is the first time there have been stay-at-home orders in regional NSW since this outbreak began.

Deputy Premier John Barilaro said it was a tough but appropriate response, given the highly infectious nature of the Delta strain of the coronavirus – and also blamed the tardy vaccine rollout.

“If we have to do more we will do more.”

Mr Barilaro said his federal Coalition colleagues have “let us down”, with demand for COVID vaccines outstripping supply.

“It is a real issue for the federal government. They promised more,” he said.

In a later interview with KIIS FM in Melbourne, Mr Morrison was repeatedly asked to apologise for low vaccination rates leading to lockdowns during a round of radio interviews.

He said the nature of the coronavirus meant some problems were out of the government’s control.

“I’m accountable for the vaccination program and everything that’s happened in it,” he told KIIS FM.

“I’m also accountable for fixing it and that’s what we’re doing.”

The Morrison government is resisting pressure to reinstate JobKeeper wage subsidies with at least 13.5 million people under heavy restrictions across NSW, Victoria and South Australia.

Instead, people who lose work in designated hot spots can access weekly payments of between $375 and $600 when lockdowns extend beyond seven days.

Shadow treasurer Jim Chalmers said national wage subsidies, which initially paid out $1500 a fortnight before being scaled back, were proven to work.

“JobKeeper had its problems but it also had very important features which the government has stupidly junked,” Mr Chalmers said.

“As time goes on and we have these lockdowns it really does look like an incredibly stupid decision to end JobKeeper and replace it with something inferior.”

“The money is actually flowing out the door faster than it would have under JobKeeper,” he said.

In NSW, 388,000 claims worth $186 million have been approved during the outbreak, which has infected 1418 people in the past month.

Victorians will become eligible on Friday when the state’s lockdown enters its second week.

Mr Morrison indicated areas in South Australia that were not declared hotspots would still receive support.

The state government is expected to foot the bill for people outside Commonwealth-defined hotspot zones.

SA confirmed one new case of COVID-19 in the community on Wednesday, its first full day of a week long lockdown.

Elsewhere, Victoria’s case numbers spiked to 22 with all cases linked to known outbreaks.

PM denies bungled rollout is to blame for lockdowns