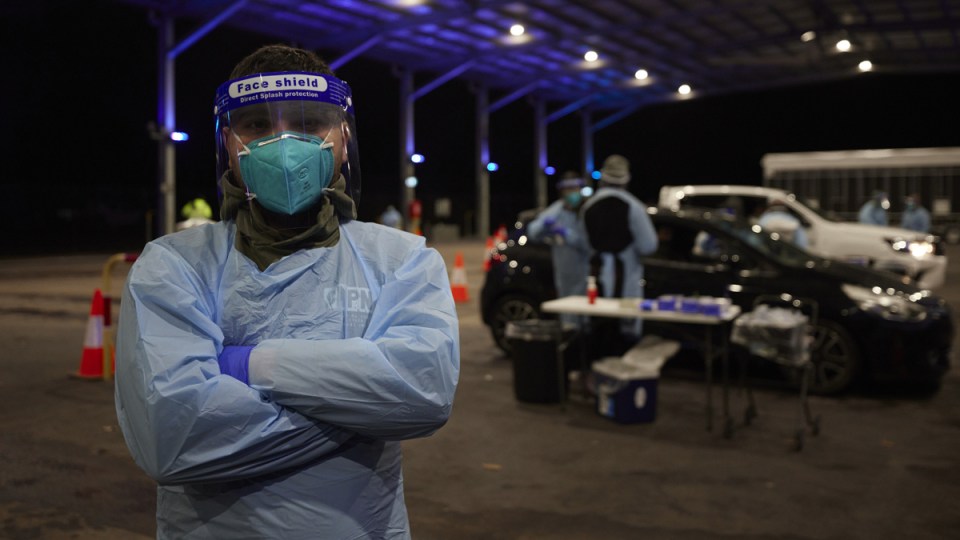 More than half of Australia’s population will soon be in lockdown as outbreaks of the infectious Delta strain of the coronavirus flare across much of the country.

And the cases keep coming. One of the latest is a factory worker in NSW’s central west, who has reportedly contracted the virus from an infected truck driver who travelled to the region over several days.

The driver had left the lockdown of greater Sydney to make a delivery to the Nestle Purina factory at Blayney, near Orange.

The factory worker was diagnosed on Tuesday morning and will be officially included in Wednesday’s figures from NSW.

A case has also been confirmed in the rural town of Cootamundra, 400 kilometres south-west of Sydney.

The state reported 78 local infections on Tuesday – the first time in several days it had fallen well short of 100.

In Victoria, Premier Daniel Andrews announced a seven-day extension to the state’s snap lockdown – which had been meant to end at midnight Tuesday. But with 13 more cases, including one whose origin remains a mystery, health authorities were not prepared to reopen.

“We can’t run the risk that there are cases out there that we don’t know about,” Mr Andrews said.

“We need to avoid what is going on in Sydney at the moment. We are determined to do that.”

From 6pm Tuesday (local time), South Australia will follow NSW and Victoria into lockdown after five cases of Delta variant detected in Adelaide in less than 24 hours.

Premier Steven Marshall declared the seven-day lockdown was the state’s “one chance” to get it right.

“We know these restrictions will take a heavy toll. But we’ve always had a situation where we go hard and we go early in South Australia,” he said.

SA’s new restrictions, combined with existing stay-at-home orders in NSW and Victoria, mean more than 13.5 million Australians will be living under tough lockdown rules within hours.

“We have got nine cases who have had their entire infectious period not in the community. That is a really strong sign,” Professor Sutton said on Tuesday.

However, there is one case, a woman in her 20s, that has not been linked to an existing cluster. She is from Roxburgh Park, in Melbourne’s north.

Victorian authorities also remain concerned about worrying super-spreader events – including at sports matches at the MCG and AAMI Park.

In other developments, Victoria will ban all travel from NSW for two weeks under new rules that will allow only exempt authorised workers and people with compassionate reasons to enter the state.

What is going on in Sydney?

NSW Premier Gladys Berejiklian said the community’s effort was finally beginning to make a difference in the Sydney outbreak.

But she again encouraged those in the Canterbury-Bankstown LGA, Hurstville and Kogarah areas to come forward for testing.

The lockdown of Greater Sydney (including the Blue Mountains, Central Coast, Wollongong and Shellharbour) is slated to end on July 30, but there are increasing concerns it might be further extended.

A total of 1418 people have been diagnosed with locally acquired COVID infections since the state’s outbreak began on June 16.

Under public health orders, employers in locked down areas are required to direct employees to work from home.

In regional NSW, working from home has not been mandated but must be allowed where possible.
There are 95 COVID-19 cases in hospital in NSW, with 27 people in intensive care, 11 of whom are ventilated.

There are now ten COVID cases aboard the Indonesian cargo ship docked off the coast of Fremantle in WA.

Federal Health Minister Greg Hunt has hailed the drop in NSW cases, describing it as “the most important real sign of hope in Australia today”.

“A year ago we went through the agony and ravages of the Victorian second wave,” he said on Tuesday afternoon.

“We are in a vastly better place this time – we have gone through vaccinations and the lessons learned from that period. And we can do it and will do it again.”

Australia’s Pfizer supplies are being boosted, with a million doses a week starting to arrive in the country. Mr Hunt said they would be distributed on a “per capita basis between states”.

However, Australia’s vaccine rollout continues to lag behind much of the developed world with just 13.7 per cent of people aged over 16 fully vaccinated.

There are renewed calls for welfare recipients to be made eligible for federal government coronavirus disaster payments of up to $600 a week.

The Australian Council of Social Service estimates 800,000 people who support 400,000 children have been excluded.

ACOSS chief executive Cassandra Goldie is urging state and federal leaders to fill the gap ahead of a national cabinet meeting on Friday.

“People on social security are people on the lowest incomes, the most financially vulnerable and they’ve been completely left out of these disaster payment arrangements,” she told ABC radio.

“It just highlights the two tiers, the two classes that have been introduced with this mess of a system.”

Millions of Australians in lockdown amid Delta spread