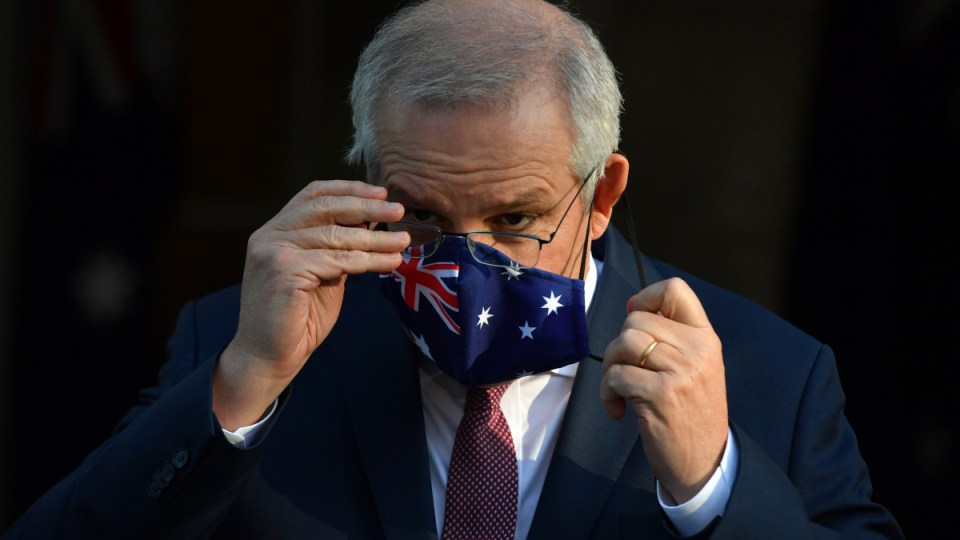 Support for Scott Morrison and the government have slumped in Newspoll, in a major backlash against the botched vaccine rollout.

Labor has surged to a two-party lead of 53-47 per cent, compared with 51-49 per cent in the previous poll in late June.

The Australian reports the latest result is the worse for the Coalition this term, and if replicated at an election would deliver the government a clear loss.

Satisfaction with Morrison’s handling of the pandemic, which now sees lockdowns in the nation’s two largest states, plunged nine points in the past three weeks to 52 per cent.

As the brought-forward Pfizer supplies start to arrive, confidence in the government’s management of the rollout is negative for the first time, with only 40 per cent believing it being handled satisfactorily.

Morrison’s net approval in Newspoll – plus 6 – is at its lowest since the bushfire crisis, with an eight-point overall shift.

Anthony Albanese’s position worsened a little – he is on net minus 8.

Despite a small drop, Morrison retains a solid lead over Albanese as better PM – 51-33 per cent.

The poll saw an 18-point drop in satisfaction with the handling of COVID since April.

Sky News at the weekend reported Morrison had urged NSW Premier Gladys Berejiklian to strengthen the Sydney lockdown. She did so soon after.

The prime ministerial intervention was likely superfluous because it was already clear harsher measures were needed. But it was notable on a couple of grounds.

In the past Morrison strongly leaned to lockdown scepticism, praising Berejiklian as a woman after his own heart and pointing to the NSW gold standard of limiting restrictions.

The much more infectious Delta variant has forced a change in the positions of both leaders.

Also, the Morrison intervention looked like the Prime Minister playing himself into the sharp end of the current COVID action, which is concentrated at the state level.

As both the NSW and Victorian governments struggle with serious outbreaks and the detail of their lockdowns, Morrison must be frustrated with his lack of direct power – apart from repeatedly restocking the ATM.

That’s of course leaving aside the vaccine rollout, a federal responsibility, the mishandling of which Newspoll shows is dramatically burning the PM’s voter support.

Late last week, Morrison finally spoke with Pfizer chairman and CEO Albert Bouria. This call, federal sources say, had been scheduled some while ago. It is not clear whether that was before or after the PM heard of Kevin Rudd’s contact with Bouria.

The federal government insists the Pfizer bring-forward was entirely due to its efforts and nothing to do with Rudd. Even so, it was a bad look to be talking direct to Bouria so late in the piece, and after Rudd. It had all the appearance of catch up.

As things stand, Berejiklian, Victorian Premier Daniel Andrews and Morrison are simultaneously under a great deal of heat.

In dealing with COVID, as Berejiklian will attest, you can go from hero to villain very rapidly; hailed in May as “the woman who saved Australia”, she’s pilloried in July for stuffing things up.

Morrison is suffering the same shift in public judgment. And things are not likely to change in the near future – despite the brought-forward Pfizer supplies, there will be shortages for some time yet.

Of the two premiers fighting outbreaks, Berejiklian is under the greater pressure.

She and Andrews took different approaches: Andrews locking down immediately and Berejiklian starting with a soft lockdown that had to be toughened (then going further on shutting construction than Andrews ever has).

Even if the five-day Victorian lockdown has to be extended, the situation there appears more manageable than in NSW. On Sunday, Victoria reported 16 locally acquired new cases, while in NSW there were 105.

Berejiklian is under siege simultaneously for not acting fast and strongly enough, and for abandoning her basic less restrictive approach.

The concentration of the NSW infection in south-west Sydney has also complicated the situation, because (as Victoria knows) a heavily multicultural area needs particularly good communications and sensitive handling.

This new COVID crisis has seen another round of inter-governmental bickering.

Victoria seethes with retrospective resentment about how Coalition figures (federal and NSW) blamed it last year over its second wave that resulted in hundreds of deaths, mostly aged-care residents.

Melbourne then and Sydney currently both had their crises triggered by lapses in quarantine arrangements.

NSW is in a much better position to cope than Victoria was – but now the virus is more virulent, and there’s little confidence the Sydney lockdown won’t extend into August.

Last week the Andrews government labelled Morrison the “prime minister of NSW”, declaring that state had been treated more generously than Victoria had been in its earlier lockdown this year.

Treasurer Josh Frydenberg accused Andrews of “whingeing”. Andrews had a dig at NSW.

Andrews is always a tough operator – probably why he and Morrison have a grudging mutual respect.

Last week Andrews made it clear he expected Victorian workers to get the latest full federal financial help, even though, if the lockdown were only five days, they’d fall short of fully meeting the federal conditions. Morrison complied.

The latest lockdowns come as polling just released by the Australia Institute, a progressive think tank, shows people’s faith in state governments’ handling of COVID at an all-time high.

The Australia Institute has been regularly polling the question “which level of government do you think is doing a better job of handling the COVID-19 crisis?’’

Respondents were asked to choose between their state or territory, the federal government, both equally, or say they didn’t know.

By April, 39 per cent nominated their state or territory; 18 per cent the federal government; 28 per cent both.

Early this month (just as the NSW lockdown was starting) 42 per cent rated their state or territory as the government doing better, 16 per cent the federal government, and 24 per cent both equally.

In NSW in July, 39 per cent said the state government was doing the better job, 13 per cent nominated the federal government; and 28 per cent put both equally.

The Australia Institute interprets the response to COVID representing “a potential realignment of state-federal relations”.

Certainly the second year of the pandemic, like the first, is seeing the states showing little deference to the federal government when they perceive their core interests are at stake.

They determine the lockdowns and, now JobKeeper has gone, NSW and Victoria have shown they are willing to play hardball to extract the best financial support for their citizens.

And the Morrison government knows it will pay a political price if it is seen as a skinflint.