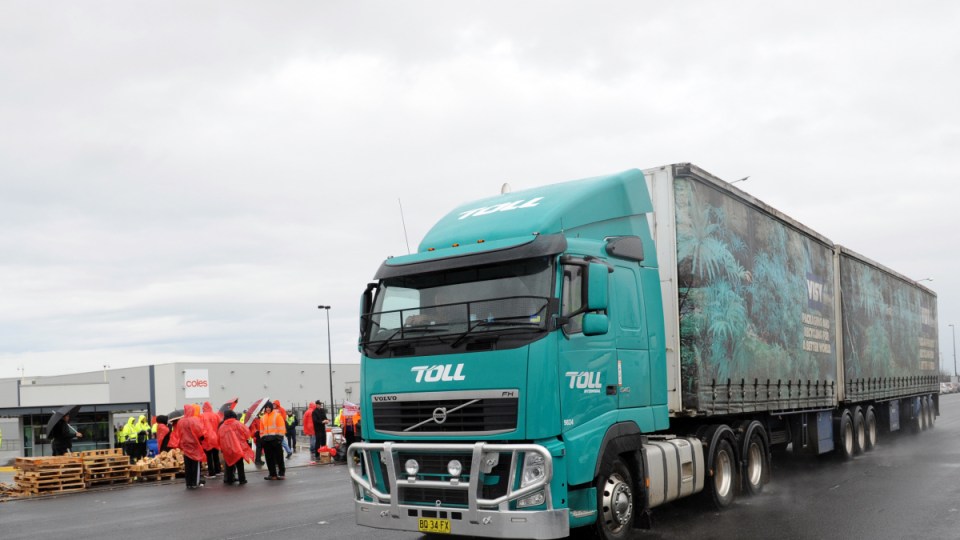 Thousands of truckies are pushing for strike action after one of the country’s biggest transport companies proposed a new workplace agreement they say will drag down standards in Australia’s deadliest industry.

After negotiations between drivers and Toll broke down on Wednesday, the Transport Workers Union has written to the Fair Work Commission for permission to vote on strike action.

Almost 7000 workers could walk off the job, crippling food and fuel supplies across Australia.

Under the proposed workplace agreement, Toll plans to employ new drivers delivering online shopping on rates 10 per cent above the award with the national minimum standard of super.

But the union says that will put pressure on existing employees who are working under better pay conditions, and could result in them being forced out of the company.

The company is also outsourcing work to contractors that pay their drivers less, and is trying to strip part-time workers’ overtime entitlements, it says.

Toll is proposing that part-time employees be allowed to work additional hours at ordinary pay up to 38 hours, after which overtime rates would apply.

All of the changes will lower standards in an industry already in crisis, TWU national secretary Michael Kaine says.

“Drivers know all too well what happens when conditions and pay are dragged down in transport: stressed, chronically fatigued drivers are forced to work long hours, speed and skip rest breaks resulting in deaths and injuries on our roads.”

“We know that Toll’s clients like Amazon have made multi-billion dollar profits throughout the pandemic,” he said.

“The transport workers who’ve made that happen should be rewarded, but instead their jobs and earnings are under threat.”

“Toll Group is disappointed by this action and is continuing to engage in discussions with union representatives to reach a fair and reasonable agreement for our employees and the business,” a spokesperson told AAP in a statement.

“We will continue to engage in constructive discussions to resolve the remaining points of agreement to avoid unnecessary disruption to Australians.”