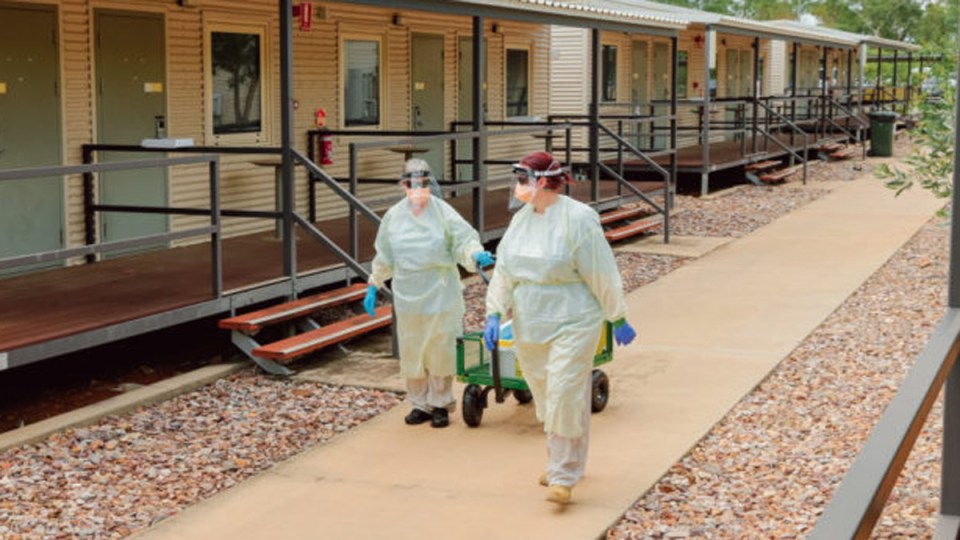 All personnel arriving in Australia for the games are required to do two weeks quarantine.

A planeload of US military personnel in the Northern Territory have been declared close contacts after a fellow US Army soldier tested positive for COVID-19.

The latest NT positive case comes as a Chinese surveillance ship makes its way towards Queensland ahead of a joint military exercise with the United States.

NT Health and the Department of Defence declined to answer how many service personnel were on the affected flight.

“All personnel that travelled on the aircraft with the US Army member that tested positive are being treated as close contacts,” a spokeswoman said.

The infected woman, 22, who is a serving member of the US Army, arrived in Darwin on Thursday July 8 before being diagnosed with the virus late on Monday.

She is one of about 9000 foreign service personnel in Australia for the Talisman Sabre 2021 military war games, which started on Wednesday.

She was initially quarantined at the US Marine-leased Bladin Village workers camp, 36km south of Darwin, with about 1000 other US servicemen and women when she tested positive.

NT Health said the woman has since been moved into the red zone at the Centre for National Resilience in Howard Springs, with her fellow passengers now considered close contacts.

“They are undertaking quarantine procedures at Bladin Village including daily checks.”

A Defence spokesman said the woman did not come into contact with the community while infectious.

More than 17,000 military personnel from Australia, the US, UK, Canada, New Zealand, Japan and South Korea will take part in TS21.

The majority of the mock war games are scheduled to take place in Queensland and off the east coast of Australia.

UK, Canadian, Japanese, and Korean service personnel have quarantined in Sydney. Other foreign troops have been billeted to Brisbane hotels, a spokesman said.

Meanwhile, Australia is tracking a Chinese surveillance ship making its way towards Queensland ahead of a joint military exercise with the United States.

Prime Minister Scott Morrison said Australia respected freedom of navigation in international waters but was “very wary” of the ship.

“They’re in an area where they’re allowed to be and we know they’re there and we’re keeping a close eye on it,” he told Sydney radio 2SM on Wednesday.

When pressed, the prime minister conceded he was concerned about the ship.

“We wouldn’t be watching them if we weren’t,” Mr Morrison said.

“Of course we watch them. We’re aware of that. And they’re watching us.”

The Chinese electronic surveillance vessel is expected to arrive on Friday, closely monitoring Talisman Sabre war games taking place over the next fortnight.

Mr Morrison said the vessel had the same legal rights to be in the waters as Australian ships had to sail through the South China Sea.

“And so, we would just simply say that we think the same tolerances and the same appreciation of those international laws should apply.”

Defence Minister Peter Dutton said the Chinese operation was a repeat of previous years, where the People’s Liberation Army conducted both covert and overt activities.

Mr Dutton said China’s military activities had ramped up dramatically, which was partly why the joint exercises were so important.

“Talisman Sabre is not just about the collaboration between Australia and the United States, it’s about our collaboration with near neighbours,” he told reporters in Queensland.

“Our militaries working together in the region is more important than it has ever been.”