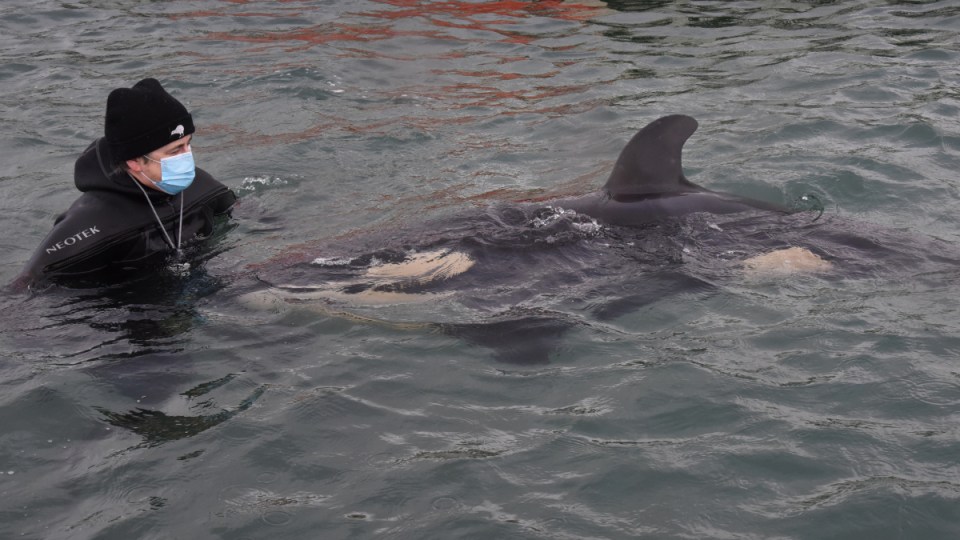 Volunteers help care for a baby orca in New Zealand as the search for his family continues. Photo: AAP

The search for an abandoned baby orca’s pod in New Zealand will enter a fifth day, with possible sightings north of Wellington on Wednesday proving fruitless.

The orca has been in the care of volunteers and animal welfare experts since Sunday, when it was discovered beached in a rock pool.

The juvenile whale, believed to be less than six months old, has captured the hearts of New Zealanders, and has been named Toa in a Maori blessing.

Thousands of Kiwis have visited Plimmerton Boating Club where the orca is being held in a makeshift pen.

Wildlife rescuers in New Zealand are scrambling to keep a stranded baby orca alive, as volunteers scour waters off Wellington to find the calf's motherhttps://t.co/WjT01kkxlf pic.twitter.com/PAhakjnTRn

Many more have joined the hunt for the pod, looking in boats, planes, helicopters and from high vantage points along the Kiwi coast.

Two possible pod sightings off the nearby Kapiti Coast and from the Marlborough Sounds, further away at the tip of North Island, have not been verified.

“We went out there and there was nothing there,” Whale Rescue crew member Mike Coleman told AAP.

“From the shore, people looking at the water are seeing orca fins but when they’re rolling like they are today, they could just be waves.”

“We’d love people to send photos if they have a sighting.

“People confuse waves with orca and another sighting turned out to be a seal. If we get a photo we’ll know straight away what we’re looking at.”

Volunteers caring for Toa have been heartened by the calf’s response to a feeding by veterinarians.

“We fed him electrolytes and food and it’s made a difference … he’s now swimming in nice straight lines and turning left and right,” Mr Coleman said.

“Until that he’d just been turning left like a stock car driver. Now he’s getting a bit more freed up and looking comfortable.”

Locals are taking turns jumping into freezing wintry waters to spend time with the animal, corralling him away from walls and providing company to the social animal.

Department of Conservation manager Ian Angus said the pen would be improved with the prospect of nasty weather which could also hamper the search.

“There is some terrific support here being delivered by some incredibly passionate people,” he said.

“It’s the middle of the New Zealand winter, and we need to ensure people are safe.”

If the pod is spotted, the mission will move into a challenging phase of relocating Toa.

“I want to emphasise the welfare of the calf is at the centre of all our discussions and the decisions we’re making.”

New Zealanders have been urged to call the DOC hotline – 0800 DOC HOT – if they spot an orca pod.