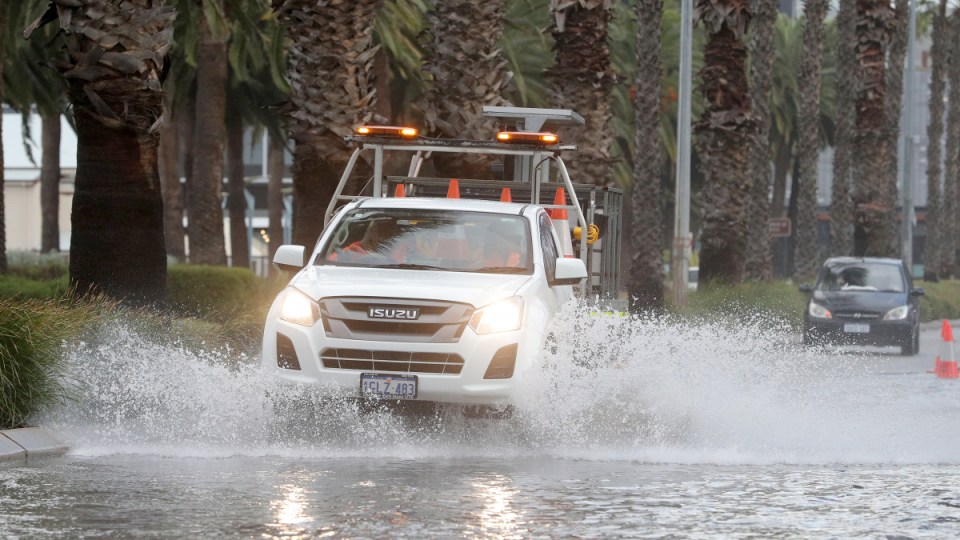 Perth is experiencing its wettest start to July since 1965 with more rain expected. Photo: AAP

West Australians are being warned a storm that has flooded streets and ripped the roof of a home in the state’s south is far from over.

Damaging winds and heavy rain are expected to continue until at least Tuesday night, driven by the strongest cold front of the year.

“This event will continue throughout tomorrow with periods of strong winds and heavy rain.”

An unusually prolonged period of squally weather will continue through much of southwest WA to Wed. A severe weather warning is current for places including Albany, Bunbury, Katanning, Mandurah, Manjimup, Margaret River, Mount Barker, Narrogin and Perth https://t.co/SjHDEFUgQP pic.twitter.com/hg8ARoslP9

While less intense than the storm that drenched Perth and surrounding regions on Friday, this more prolonged system has still kept authorities busy.

Emergency services have received just over 100 calls and 59 requests for assistance since early on Monday, mostly for flooding and roof damage.

A home in the coastal town of Eagle Bay, 256 kilometres south of Perth, had its entire roof torn off by what locals described as a “tornado”.

Cameron Alder told ABC local radio he and his two boys, aged eight and 10, had been sleeping when the “terrifying” storm ripped through the house.

Roof ripped off a home in Eagle Bay after this morning’s wild weather. See the full story tonight. @GWN7News pic.twitter.com/nZrhwWsHbu

The Bureau of Meteorology said it was still investigating whether there had been a mini-tornado but confirmed destructive winds had damaged several homes.

It said wind gusts of more than 90km/h had been recorded at Rottnest Island, Busselton Jetty and Cape Leeuwin.

Most of the calls for assistance were in the Perth metropolitan area despite periods of reprieve between the wind and rain.

It comes after authorities urged people to sandbag their homes if they had experienced flooding during Friday’s storm.

“We think because of the actions the public took, we’ve received less requests,” Mr Mosconi said.

Almost 700 homes were without power on Monday afternoon in suburbs including Lower Chittering, Koondoola and Belmont.

Damaging wind gusts of more than 100km/h have been forecast for a warning area spanning from Lancelin, 125 kilometres north of Perth, to Bremer Bay, about 500 kilometres south-east of Perth, including Perth, Narrogin and Katanning.

Higher than normal tides and dangerous surf are possible from Shark Bay, about 800 kilometres north of Perth, through to Albany, about 400 kilometres south of Perth.

They are expected to continue for several days with the potential for coastal erosion and inundation in low-lying areas such as Riverside Drive in Perth.

The city has already recorded its wettest start to July since 1965, with rain throughout south-west WA above average so far this year.

Severe weather is no longer occurring in the Central West and Central Wheatbelt districts.