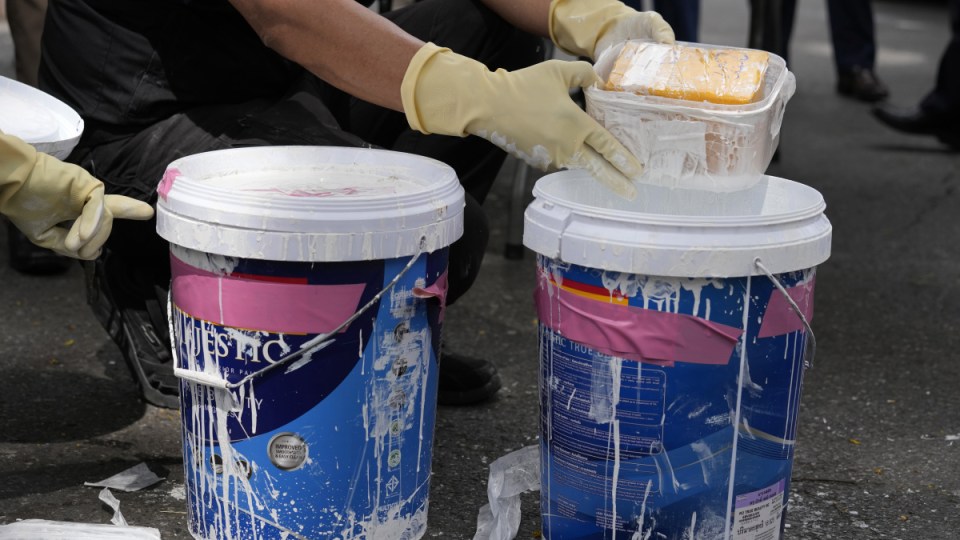 The heroin packages were found during an inspection of goods that were to be shipped to Australia. Photo: AP

Customs officials in Thailand have made their biggest seizure of heroin this year, about 315 kilograms worth up to $US29 million ($38 million), which was bound for Australia.

They did not say where the drugs originated, but the seizure comes amid concerns that production may surge in neighbouring Myanmar, the region’s main supplier of illicit drugs, because of severe instability following the military’s overthrow of the elected government in February.

Customs Department Director-General Patchara Anuntasilpa said 134 shrink-wrapped packets of heroin, each weighing about 2.4 kilograms, had been concealed in a shipment of acrylic paint headed for Australia.

He said the drugs were discovered on Monday because the packets of heroin were placed in square plastic containers which stood out on X-rays of the paint buckets.

The arrest of a suspect led to the identification of the person who hired him, who fled to Laos, said Wichai Chaimongkol, secretary-general of the Office of the Narcotics Control Board.

The Golden Triangle area, where the borders of Myanmar, Laos and Thailand meet, was a major production area for opium and hosted many of the labs that converted it to heroin.

Thailand has almost completely eliminated opium farming and heroin production, which continues in Myanmar, whose border areas have always been poorly policed.

Heroin and other drugs are often smuggled through Laos to Thailand, where much of it is transshipped to overseas destinations such as Australia.

Over the past two decades, easily manufactured methamphetamines have supplanted opium and heroin to become the dominant illegal drug in the region for both domestic consumption and export.

The Australian Strategic Policy Institute think tank noted in a report in March that statistics show that “the Australian drug trade is large and growing.”

“Despite the best efforts of law enforcement agencies, methamphetamine and heroin use has been increasing by up to 17 per cent year on year. Falling prices in Southeast Asia are likely to keep pushing that number up, while drug prices and purity in Australia remain relatively stable,” the report said.

The UN’s drug agency has warned that the political turmoil in Myanmar could lead to an expansion of the illegal drug trade.