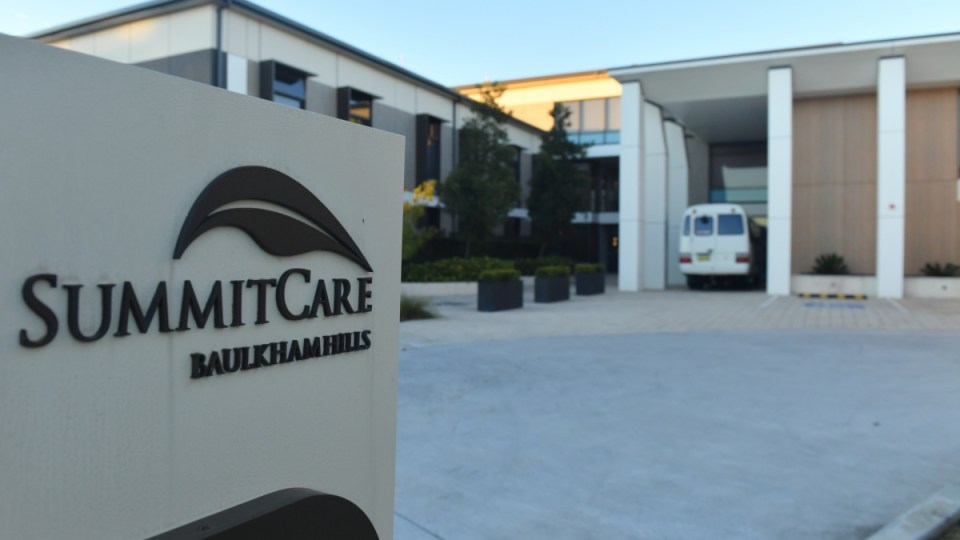 Summitcare COVID-cases grow to five with all residents transferred to hospital where families say they feel "safer".

The boss of a Sydney aged-care home hit where COVID is spreading has confessed she has no idea how many of the homes workers have been vaccinated against the virus.

The outbreak at SummitCare’s Baulkham Hills home grew to five on Monday, with chief operating officer Michelle Sloane admitting she was “disappointed” more cases had emerged.

The two latest cases at the home are both women, aged in their 70s.

One is fully vaccinated against the virus. But the other, who moved to the home in May, missed its vaccination program and has had no COVID shots.

They were among 35 more locally acquired coronavirus cases in NSW on Monday.

The Baulkham Hills home went into lockdown last Friday after an unvaccinated nurse who worked there tested positive.

On Sunday, operators confirmed the first three infections in residents.

All have been moved to Westmead Hospital, where they are said to asymptomatic and comfortable.

Two-thirds of the home’s workforce of about 200 is thought to be unvaccinated, with mandatory jabs for aged-care staff not due to be enforced until September.

Ms Sloane said on Monday that she simply “didn’t know” how many staff had had COVID shots. It was also unclear if any had turned down vaccines.

“I’m unsure of [that]. That I haven’t spoken to each one individually. There is quite a lot of them,” she said

However, almost all of the home’s 149 residents are fully vaccinated.

“I’m confident of the fact that 99 per cent of our residents are vaccinated,” Ms Sloane said.

“I can’t predict that more residents won’t test positive. What I can predict is that at the moment they are all asymptomatic and comfortable and that is a great sign.”

With just 9 per cent of Australians aged over 16 fully vaccinated against COVID-19, Ms Sloane said front-line services across Australia were grappling with the same problem.

“If we said to all of our unvaccinated staff ‘don’t come to work’, there’d be no one to care. That is not just us but every aged-care business across Australia and every hospital across Australia,” she said.

“While we take the right precautions with the right masks and the right protective gear, those residents are as safe as our staff are safe.”

Kathie Melocco, whose parents Allan and Lona Patrick live at SummitCare, is angry her 88-year-old father is one of the residents who contracted the virus.

“Dad was vaccinated and after all the trouble we’ve had in aged care [we assumed] that the jab was given to staff at the same time,” she told 2GB radio.

“In aged care, it’s one of the most dangerous places in Australia.”

Council on the Ageing chief executive Ian Yates said on Monday the vaccine rollout to aged care workers had been too slow, particularly given outbreaks have primarily occurred due to infected but asymptomatic staff.

Also among Monday’s new cases in NSW were five connected to flight VA524 from Gold Coast to Sydney, on which an infected air crew member worked, and a student at Rose Bay Public School in Sydney’s east.