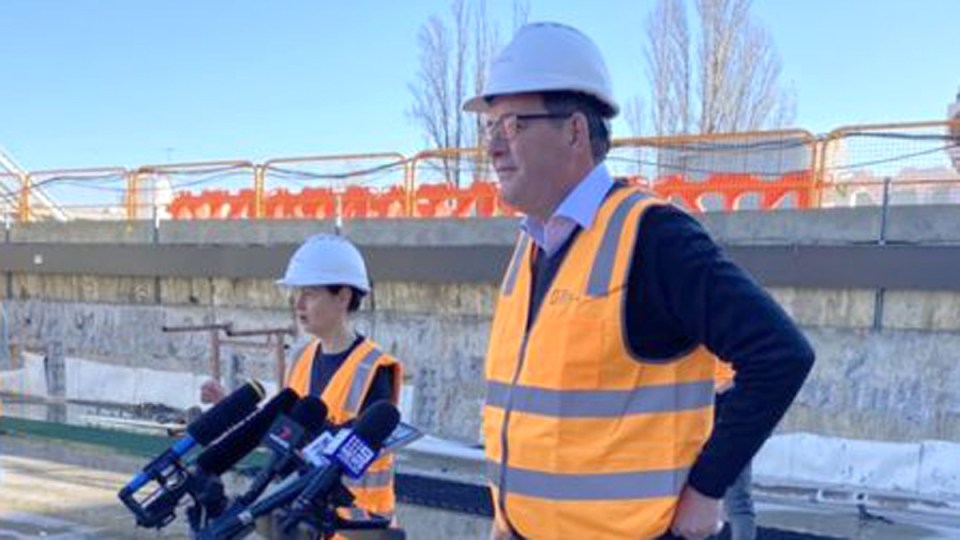 Premier Daniel Andrews faces the media on Monday after a four-month absence.

Victorian Premier Daniel Andrews has again taken aim at “vile” rumours about the back and rib injuries that forced him into extended medical leave, during his first press conference since returning to the job.

Mr Andrews also revealed his spine was “basically healed” but he was still on medication to reduce inflammation as his ribs recovered.

The Premier returned to work on Monday. He had been on medical leave since March 9, when he slipped and fell on wet stairs at a Sorrento holiday home. He broke several ribs and fractured his T7 vertebra.

In a carefully produced video posted to his social media on Sunday, Mr Andrews and his wife Catherine revealed they thought he may die after the fall.

The video had overtones of an election campaign, with Mr Andrews confirming he would lead the party to the 2022 state vote.

On Monday he faced media at the site of one of the new Metro Tunnel train stations, a key component of his government’s big infrastructure build.

He gave particular thanks to Deputy Premier James Merlino for stepping in and for doing a “an astounding job”.

The Premier, who became a national name and a daily part of many Victorians’ lives during last year’s protracted lockdowns, was largely absent from the public eye during his rehabilitation.

He was in regular contact with Mr Merlino, but only released sporadic updates on his condition through his team’s social media channels.

Earlier in June, government MPs demanded an apology from the opposition after shadow treasurer Louise Staley released a list of questions about the fall. Ambulance Victoria was forced to release a statement about the callout.

“As for those who tried to politically weaponise it, they’re irrelevant to the work I do, and I won’t waste my time or my breath on them.”

On Monday, the Premier fielded questions about the specifics of his fall, his injury and the Sorrento holiday home, which he said was rented through a private agency.

He said he was on official annual leave for the weekend and was on the Mornington Peninsula with his wife and two of their children for a family weekend.

Mr Andrews said he would not apologise “for following medical advice and getting fit and well” and stepping back from the public eye during his recovery.

“You can’t short-circuit this, you can’t cheat it,” he said.

He said he would continue to experience rib pain for some time, and while he was only on significant pain medication for “a matter of weeks”, he was on anti-inflammatory tablets.