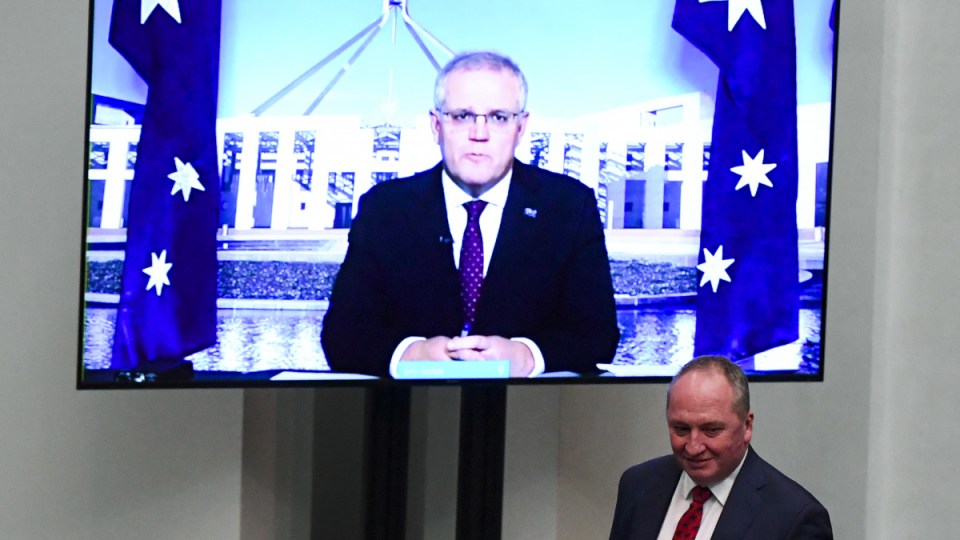 It took three years and two leadership tilts, but Barnaby Joyce has returned as Deputy Prime Minister and Nationals leader, saying he hopes to be a “better person” than during his last stint in the jobs.

The Riverina MP won praise on Monday for graciously accepting the vote, including fronting up for an awkward obligation to lead Question Time – despite no longer leading his party.

Mr Joyce, who was Nationals leader from 2016 to 2018, wrestled back control in a partyroom spill on Monday morning. The Nationals don’t reveal exact voting results of internal elections, but it was expected to be a close-run affair in the 21-member party.

“I’d like to say to my colleagues how humbled I am,” Mr Joyce said in the first press conference of his second stint as Deputy PM.

“The task going ahead, first and foremost, is to make ourselves a team that is formidable for the next election.”

The change of leader means there will be a new Coalition agreement between the Liberal and National parties.

Mr Joyce previously criticised PM Scott Morrison for not giving major ministerial portfolios to Nationals, and for moving toward a net zero by 2050 emissions goal. He didn’t detail what he would pursue in the new negotiations, but said he had matured during his time on the backbench.

Mr Joyce quit as leader in 2018 amid outrage at his extramarital affair. But it was a concurrent internal party investigation into allegations of sexual harassment, which later made no finding, that actually prompted him to step down.

“I acknowledge my faults, and I resigned as I should, and I did. I’ve spent three years on the backbench and I hope I come back a better person,” he said on Monday.

“You have to have time to consider, not only the effect on yourself, but more importantly, the effect on others. I’ve done that. I don’t want to dwell on the personal, except to say, hopefully one learns from their mistakes and makes a better person of themselves.”

On net zero, Mr Joyce said he would talk with colleagues “about what they believe is best for them and then fight on that”.

Publicly, Mr Joyce had only kind words for Mr McCormack. Mr Joyce merely said he had “a different suite of issues” and “attributes” to the man he replaced.

Moments earlier, Mr McCormack said he respected the result, and wished Mr Joyce “all the best” in the new role. He resisted criticising any colleagues by name, but was broadly critical of those he claimed had “backgrounded” journalists against him with anonymous complaints.

“If you are going to say something, have the guts and gumption to put your name to it,” Mr McCormack said.

Mr McCormack earlier had only a brief comment as he returned to his office after the partyroom vote, simply saying “that’s democracy” and that it was a privilege to serve as leader.

He said he would stay on in parliament, and noted he had been pre-selected to as the candidate for Riverina at the next election, but stopped short of confirming he would contest the poll.

In a statement from quarantine at The Lodge, after returning from a trip to Europe, Mr Morrison said he and Mr Joyce had a “shared passion” for regional and rural communities. He welcomed his new Deputy PM to the cabinet, and said he looked forward to “working closely together”.

“I thank Michael McCormack for his dedicated service as deputy prime minister. Michael will continue to be an invaluable member of the National Party, and a passionate advocate for regional and rural communities,” Mr Morrison said.

Mr McCormack’s humility was on immediate display, when he had to take the chair as deputy PM in Question Time, just two hours after being deposed. With Mr Morrison appearing via video and Mr Joyce yet to be sworn in by the governor-general, it was up to Mr McCormack – no longer the Nationals leader – to lead the daily session, while Mr Joyce sat on the back benches.

“Who is the Deputy Prime Minister of Australia?” Mr Albanese asked as his first question.

Mr McCormack took it in good humour, joking that “numbers have not been my friend today”, and “it has been a tough day for me but I still have a job”. He also took questions from Nationals supporters on the success of the “Morrison-McCormack government” and even defended Monday’s partyroom decision as a display of “democracy”.

Mr Albanese called Mr McCormack “a decent human being”, while other Liberals also had kind words.

Very sorry to see @M_McCormackMP replaced as Leader of the Nationals. He was a very honourable, consistent and constructive Deputy Prime Minister in my Government. Lucy & I saw first hand his, and Catherine’s, commitment to regional Australians. Thank you Michael and good luck.

Former PM Malcolm Turnbull, who also had Mr McCormack as his deputy PM, called him a “very honourable” man.

But other Liberals were keen to see Mr Joyce ascend to the Nationals leadership, expecting his election would reignite debate about how – and if – Australia would commit to a net zero target.

One Liberal, who is not in favour of stronger climate action, said there would need to be a tangible “compromise” on agreeing to any such target.

“Bring it on,” they told The New Daily.