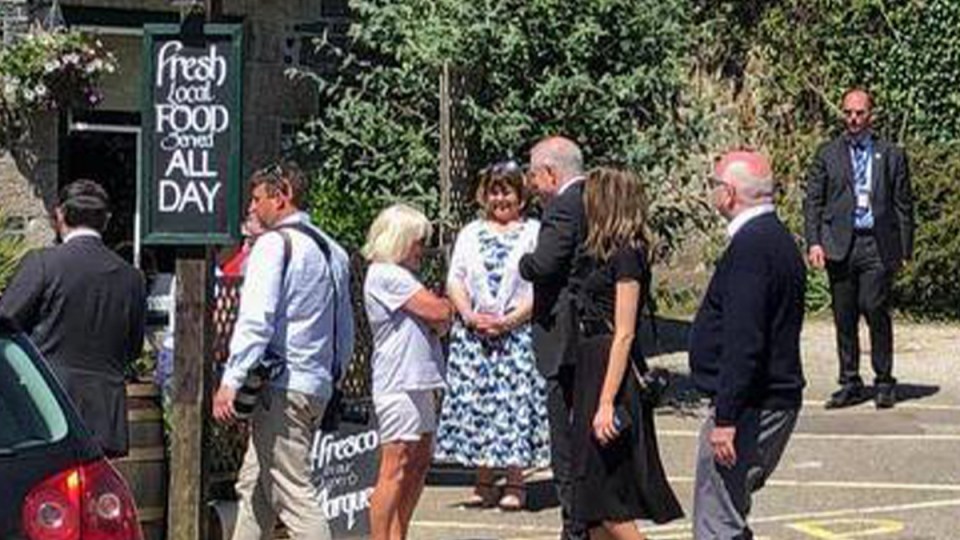 More pictures have appeared online of Scott Morrison enjoying the hospitality of British pubs on his recent jaunt to the G7.

The Prime Minister’s visit to a Cornwall pub sparked outrage among many Australians earlier this week, but it has since been revealed it was not a one-off.

Two more pubs in the area have posted their own images to social media, thanking Mr Morrison and his team for visiting while he was in Britain.

“We had the absolute privilege of welcoming the Australian Prime Minister, Scott Morrison, and the Australian High Commissioner to The Old Quay House last night for dinner,” a now-deleted post from a pub in Hayle read.

“We were overjoyed that they wanted to stay local and enjoy a relaxed evening with us, tasting the delights of our proper English pub grub.”

Another venue, Three Tuns Cornwall, was also excited to have hosted the Australian visitors.

“We were extremely honoured to welcome the Australian Prime Minister to the Tuns yesterday afternoon for a cold pint of Korev and a sandwich, after he visited St Keverne Church to leave flowers for his ancestors, as well as the Australian High Commissioner for one of our Sunday roasts”, the pub posted on Facebook.

Friends of the St Keverne pub were encouraging in the comments, pleased the visit brought good publicity for their local.

Asked whether Mr Morrison left a review on Tripadvisor, the pub replied “not yet, but we’re still hopeful.”

But back at home backlash was swift and furious, with “trapped” citizens letting fly about the Prime Minister’s gallivanting.

Australians have been unable to travel freely overseas since March 2020, when borders were shut due to the pandemic. Up to 40 per cent of Australians are estimated to have family overseas – they were among those who were particularly triggered by the site of Mr Morrison and his entourage enjoying Cornish hospitality.

She said Mr Morrison was “trying to tell Australians that UK is COVID-riddled” and has pushed the line that borders should remain closed to keep citizens safe.

“Parents, according to Scott Morrison, are not considered immediate family in Australia. Many are separated from children, partners, parents and grandparents with no road map from the government when we can see them again.

“There’s probably nothing more Aussie to do when you’re in the UK than to visit a British pub, and have a stout,” he said, after The New Daily asked whether the criticism was unfair.

Last week, Mr Morrison told Perth radio station 6PR  there were no set plans for when Australians would be allowed to travel internationally again.

Pressed to provide a percentage target for vaccinations to allow borders to reopen, he said: “We haven’t set any mark on that.”

He said less-restricted international travel would resume for Australians “when the medical advice suggests that we should”.

Coronavirus hospitalisation numbers in well-vaccinated European nations could be a crucial indicator.

On Thursday, Mr Morrison said the federal government would closely watch the rates of serious illness in Europe during its summer.

“A lot of people will be moving around under those new arrangements, and we’ll be able to see what the impact of that is,” he told Sky News.

“If the virus is there but the hospitalisations and the serious illness don’t occur and we see that on a sustained basis, well that says there is a potentially different pathway there.

“But the jury is not in on that yet.”

Australia has edged past six million doses as the sluggish vaccine rollout continues to gather momentum.

But the portion of the population that is fully immunised remains low, with the latest official figure about 3 per cent.

In contrast, major European nations are reporting high vaccination rates with almost 58 per cent of adults in Britain having received both doses.