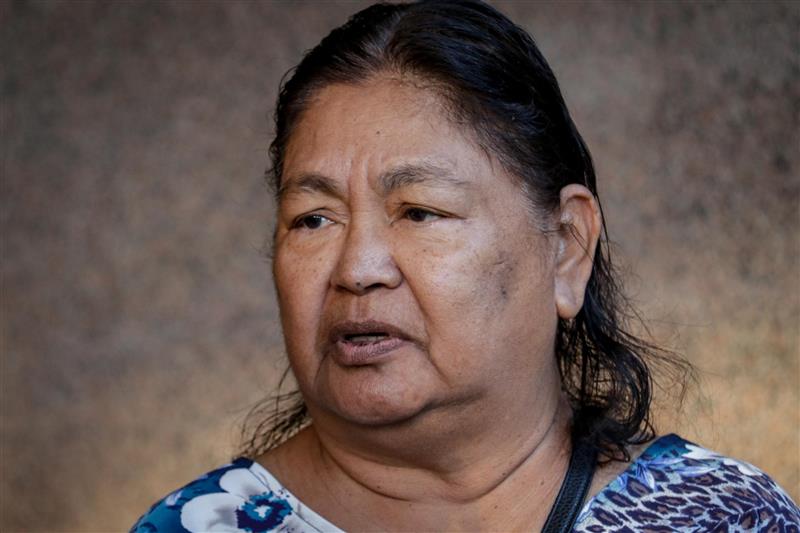 Forty two survivors of Aboriginal forced removal policies have signed a deal for compensation and apology 40 years after suffering sexual and physical abuse in the Garden Point Catholic Church mission on Melville Island north of Darwin.

“I’m happy, and I’m sad for the people who have gone already … we had a minute’s silence for them … but it’s been very tiring fighting for this for three years,” said Maxine Kunde, the leader of a group that took civil action against the church and Commonwealth in the Northern Territory Supreme Court.

At age six, Ms Kunde, along with her brothers and sisters, was forcibly taken from her mother under the then-federal government’s policy of removing children of mixed descent from their parents.

Garden Point survivors, many of whom travelled to Darwin from all over Australia, agreed on Wednesday to settle the case, and received an informal apology from representatives of the Missionaries of the Sacred Heart and the Daughters of Our Lady of the Sacred Heart, in a private session.

Ms Kunde said members of the group were looking forward to getting a formal public apology which they had been told would be delivered in a few weeks’ time.

On Wednesday, Bishop of Darwin Charles Gauci said on behalf of the Catholic Diocese of Darwin he apologised to those who were abused at Garden Point.

“I am profoundly sad that hurt was done to you while you were under the care of the church. This hurt should never have happened,” he said.

“We cannot undo the wrongs of the past, but I hope we can now walk together on a journey of healing.”

Ms Kunde said: “Justice is served, but to me, it’s still there, it’s not going to go away, and all the money in the world is not going to replace what’s happened to us.”

Grant Dearlove, a lawyer from legal firm Slater and Gordon, which represented the group, said: “This is a chapter in our history that we look back on and shake our heads.”

“These wonderful people have shown the courage to come forward, and their resilience over what has been a traumatic time in their past that they’ve carried most of their lives is a wonderful example of humanity,” he said.

Ms Kunde said she organised the action, spurred on by the suicide of her brother Alfie Calma in 2019.

She said he was tortured by the after-effects of being sexually abused by a priest and older children at the mission.

“I did this for my brother who had a journey that took me with him,” she said.

“Alfie’s case was too hard for me to take. He used to cry and cry. It was very hard.”

Ms Kunde, a Darwin woman, was physically abused by nuns who ran the institution, and her sister Josie was sexually abused.

She said she has been devastated watching many of the survivors of the mission, who stayed there between 1949 and 1962, die before having the abuse that was meted out to them acknowledged.

“So I formed a little committee and did my homework, and did this, and I’m so happy to be here now after my hard work,” she said.

Another member of the group, Sharon Greenoff, was removed from her family aged six, after being told by a welfare officer she was being taken to the shop to buy sweets.

She said she was severely beaten at Garden Point and missed her family terribly.

“This is closure now. A lot of us are still hurting and in pain, but having the apology was a good thing, so we can move on in our lives and have healing,” she said.

“All of us in that room have suffered intergenerational trauma, which is passed on to our children and our grandchildren.

“It’s always been put on the back burner, to say that never happened. Well, it did happen and that’s why many of our children are incarcerated in Don Dale today. They don’t have closure in their lives.”

The group took civil court action rather than apply for compensation through the federal government’s national redress scheme for survivors of institutional sexual abuse.

This followed the example of abuse survivors of the Retta Dixon home for children of mixed descent who received a settlement from the Commonwealth and church group Australian Indigenous Ministries in 2017, after suing them in a Federal Court class action for a lack of duty of care.

Mr Dearlove said the group’s initiative was an example for survivors from other institutions who were considering taking similar action.

“Slater and Gordon is currently investigating other circumstances across the country where similar things have happened, and it’s a way to expedite these people’s access to justice,” he said.

Howard Harrison, a lawyer from Carroll and O’Dea Solicitors, which represented the two Catholic church groups, said his clients were pleased with the resolution and would work with the survivors to decide how and when the public apology would take place.

“[Their representatives] had some very good discussions with a number of former residents today and they look forward to having the opportunity to continuing to walk with the survivors in relation to these difficult matters going forward,” he said.

“They feel there’s been a level of validation and resolution and peace achieved.”

After 40 years of waiting, Garden Point abuse survivors get justice