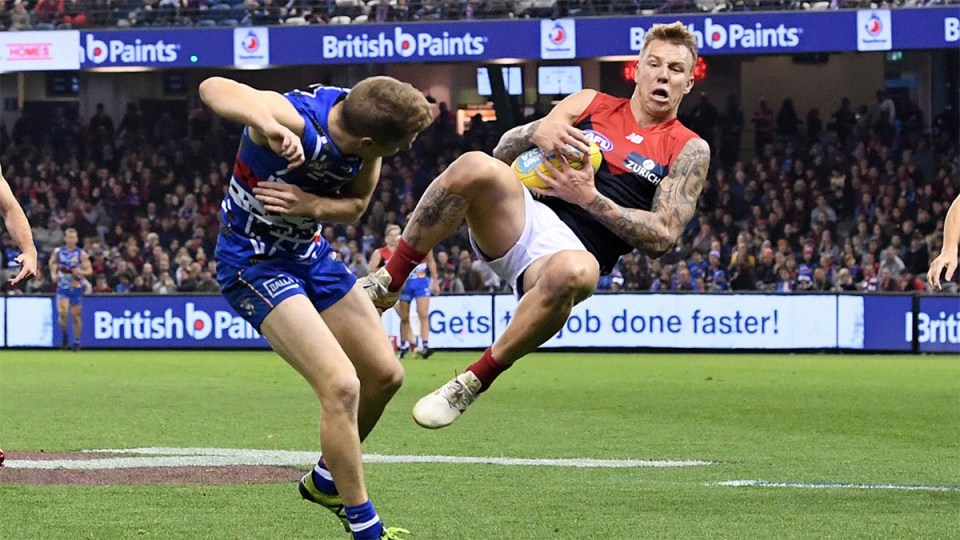 Western Bulldogs' game against Melbourne is the match of the round but the Bulldogs have had COVID tests. Photo: AAP

The AFL has put a hold on ticket sales for games in Melbourne for the next two weekends, after the increase in COVID-19 cases in Victoria.

The decision came as the Victorian government on Tuesday announced new restrictions including a five-visitor limit for private gatherings, 30 for public gatherings and masks being worn inside after five cases of coronavirus were detected today.

The Western Bulldogs also announced their players and staff had been asked to test and self-isolate to rule out any risk, following news that one of their staff had been to an exposure site.

The club said in a statement that the staff member had been to Highpoint Shopping Centre in the western suburbs of Melbourne.

“The Bulldogs co-operated fully with the advice (to test and isolate), in the best interests of public health and safety,” the Bulldogs said.

“It is expected that players and staff will be able to return to training on Wednesday, pending the negative test results being received overnight.”

Acting Victorian Premier James Merlino said the government would need more time to make a call on further restriction relating to sporting events, and no decision would be made on Tuesday on crowds for Round 11 and 12.

Limitations to bars and restaurants remain unchanged, giving hope that fans can still attend the highly anticipated AFL clash between the league’s top two ranked teams, the Bulldogs and Melbourne, on Friday night at Docklands to open Round 11.

Both teams are 9-1 after 10 games, and without further restrictions, there is a good chance the crowd could exceed the biggest gathering ever for a match between the two sides at Docklands – 33,667 fans attended in Round 13, 2017.

The cap on attendances in Victoria was raised to 75 per cent earlier this year, with the MCG raised to 85 per cent.

This allowed the Anzac Day blockbuster between Essendon and Collingwood to draw 78,113 fans, the biggest sporting crowd in the world post-COVID.

Docklands and Geelong’s home ground, Kardinia Park, had crowd limits raised to 85 per cent of capacity earlier this month.

The biggest crowd at Docklands this season came last Sunday, when 33,121 fans came to the ground to watch Essendon take on North Melbourne.

Ground capacity is approximately 56,000, so the current maximum allowed crowd is around 47,600.

Other AFL matches scheduled in Melbourne this weekend include Saturday games featuring Collingwood and Geelong at the MCG and St Kilda and North Melbourne at Docklands.

Richmond hosts Adelaide at the MCG on Sunday while in the NRL Melbourne Storm is interstate until early June, as are Melbourne’s Super Netball teams.

There are two A-League games slated for AAMI Park this weekend, while in the NBL South East Melbourne Phoenix is set to host Cairns on Saturday night at John Cain Arena.

Melbourne’s Super Rugby team, the Rebels, are due to fly to Queenstown in New Zealand for Sunday’s Trans-Tasman competition clash with the Highlanders.