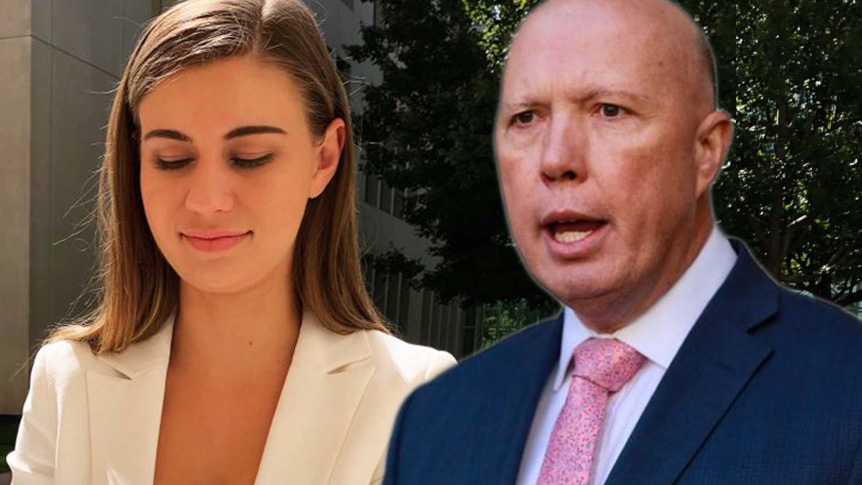 Police told Peter Dutton’s office about reports of a sexual assault in the office of Linda Reynolds in October 2019 – nearly 18 months before the now-defence minister says he learned of Brittany Higgins’ allegations.

The explosive revelations spark further questions about who in the government knew what – and when – about Ms Higgins’ claims she was raped in the office of her then-boss, Senator Reynolds.

Separately, the Australian Federal Police commissioner has revealed that ACT Police are “likely” to provide a brief of evidence to prosecutors in coming weeks, on their investigation into Ms Higgins’ allegations.

The latest information about Mr Dutton’s office came in a statement from the Australian Federal Police, in response to questions from Labor senator Kristina Keneally. The answers, first reported by news.com.au, reveal that the AFP told the office of Mr Dutton – then home affairs minister – in 2019 that police had received a media inquiry about an alleged sexual assault.

“In accordance with routine practices, in October 2019 AFP media notified the then-minister’s office in relation to a media inquiry received by ACT Policing, about an alleged sexual assault at Parliament House,” the AFP said.

Mr Dutton is now Defence Minister. Senator Reynolds was defence minister at the time of the alleged incident in 2019. As home affairs minister, Mr Dutton’s office was obliged to be informed of ‘sensitive investigations’ as “routine practice”.

The AFP said it contacted Mr Dutton’s office to let staff know “a media inquiry had been received and that ACT Policing was responding”.

Mr Dutton has previously said he personally made aware of Ms Higgins’ allegations only after he was briefed about them on February 11 this year, by AFP commissioner Reece Kershaw.

In its response on Tuesday, the AFP confirmed its “first recorded contact” with Mr Dutton “was 11 February 2021”.

“The AFP Commissioner had a discussion with the then-minister about the matter. In accordance with routine practices, AFP Media has informed the minister’s office about media inquiries received in relation to this matter during 2021,” police said.

The New Daily has contacted Mr Dutton’s office for comment.

Mr Dutton was briefed by Commissioner Kershaw a day before Prime Minister Scott Morrison has said his office first heard of the claims, via a media request on February 12. Four days later, the first report on the rape claims was published.

Mr Morrison said he found out about Ms Higgins’ allegations only when News Corp published the story. Mr Dutton said in February he “took a decision that I wasn’t going to disclose that to the Prime Minister”, which he said “was the right decision”.

Ms Higgins requested in February the AFP reactivate its investigation.

In a Senate estimates hearing on Tuesday, Commissioner Kershaw said that a “brief of evidence is likely to be provided to the ACT Director of Public Prosecutions in coming weeks” related to her allegations.

In further questions on notice responses to the Senate, the AFP also defended its decision to provide no in-depth details of its investigation into Ms Higgins’ allegations, saying it could prejudice or jeopardise its work.

“The AFP has provided all information it is in a position to disclose about the allegation of sexual assault at Parliament House,” the AFP said in its answer to questions on notice.

“In circumstances where a brief of evidence has not yet been referred to the ACT Director of Public Prosecutions and no one has been charged, providing this level of detail in relation to potential lines of inquiry, investigative methodology and/or witnesses risks the integrity of the criminal investigation.”

The AFP said such disclosures could impact witnesses coming forward, revealing secret evidence, or the “contamination” of potential witnesses or jury pools.

“The AFP appreciates the public disclosure of seemingly innocuous information or documents may not, of itself, appear to be harmful. However, while the release of certain information may not reveal the complete picture, such release, when coupled with other available information, may reveal the direction and status of the criminal
investigation,” police said.

“This may prove detrimental to the integrity of the investigation or any subsequent prosecution.”