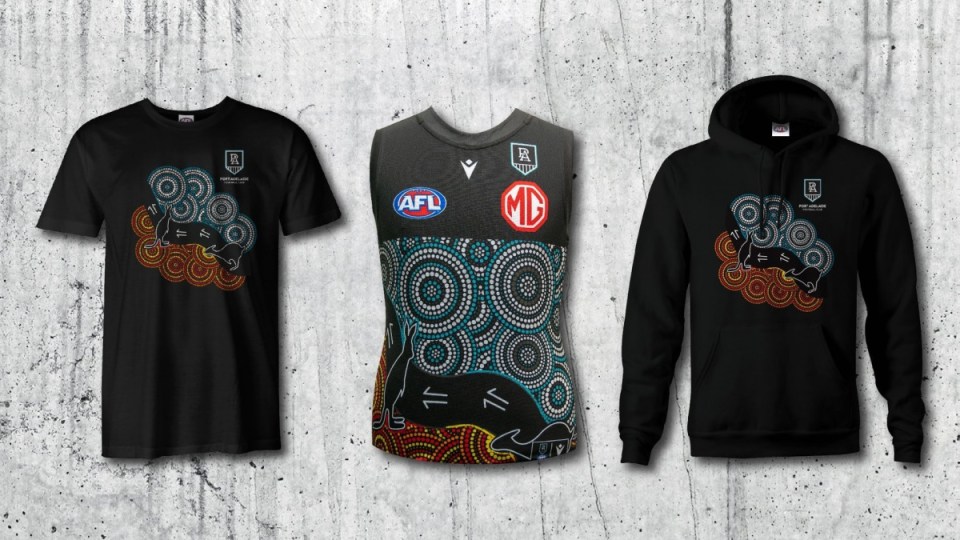 Port Adelaide Football Club is investigating claims made by an Indigenous artist that its Sir Doug Nicholls Round guernsey is a copy of artwork she created two years ago.

Elle Campbell said a painting she had displayed at the Flinders Medical Centre as part of an art exhibition in 2019 had a remarkable similarity to the guernsey design announced by Port Adelaide.

The AFL club said it was designed by an Indigenous student.

Campbell said she was “deeply hurt by the use of this painting and the ‘artist’ claiming this work to be their own”.

She also posted pictures of her at the opening of the Flinders exhibition from two years ago.

She said the design was not just the same but her “exact painting”.

“Feeling pretty heartbroken that another Aboriginal woman has stolen my artwork that not only means so much to me but it [was] also one of my first paintings,” she wrote on her Instagram story.

Port Adelaide put out a statement this morning which said the club was “aware of the allegations that surfaced on social media last night regarding the design of its Indigenous guernsey for the upcoming Sir Doug Nicholls Round”.

“The club is investigating the allegations and will not make further comment until it has all the information at hand,” it said.

At the announcement, the teenager said the painting took two months to finish.

The club said she designed it as part of an assessment task during its Aboriginal Power Cup — a football carnival designed to improve Indigenous students’ school attendance.

University of South Australia emeritus law professor Rick Sarre said copyright belonged to the creator of a design and that person would be owed compensation if it was used for a new purpose.

“If she puts it out there — the artist, the original artist — and somebody comes along and uses it for their own purposes, that’s a breach of copyright and typically someone will have to come to some agreement assuming that it’s similar enough — it looks pretty similar to me — but obviously someone else’s eyes will have to be cast over them,” he told ABC Radio Adelaide.

“My guess is sense will prevail here; wise heads will sit around and make some sort of mediated response.”

The Port Adelaide Football Club has removed a jumper, guernsey and T-shirt with the design on them from its online shop.

The club is due to wear the guernsey in its match against Fremantle at Adelaide Oval on May 30.

The club also faced controversy last month after being denied permission to wear its prison bars jumper that is similar to the uniform worn by Collingwood.